It All Starts with Twelve Notes...

But you've all surely been in a situation where you've thought to yourself: "It would come in really handy to know a bit more of music theory."

The goal of this new article series is to refresh some basic harmony concepts to anybody who wishes to discover, or rediscover, a way to easily improve his or her compositions or improvisations.

First of all, it's important to remember that, in so-called "Western music," all the sounds that an instrument can play are divided into octaves, which repeat from lows to highs. An octave is in turn divided into 12 notes. The combination of these 12 notes is called the "chromatic scale."

But then, if there are twelve notes why is it called an "octave," which implies the existence of eight elements, considering that the prefix "oct-" means eight. Well, that's where the concept of the diatonic scale and tonal system comes in. However, before addressing that, we should first define the value and name of each note interval that makes up the chromatic scale.

The name of the intervals allude to the major and minor modes, which we'll see in a moment. Starting from the "C" note (although you could pick any other note), you have: 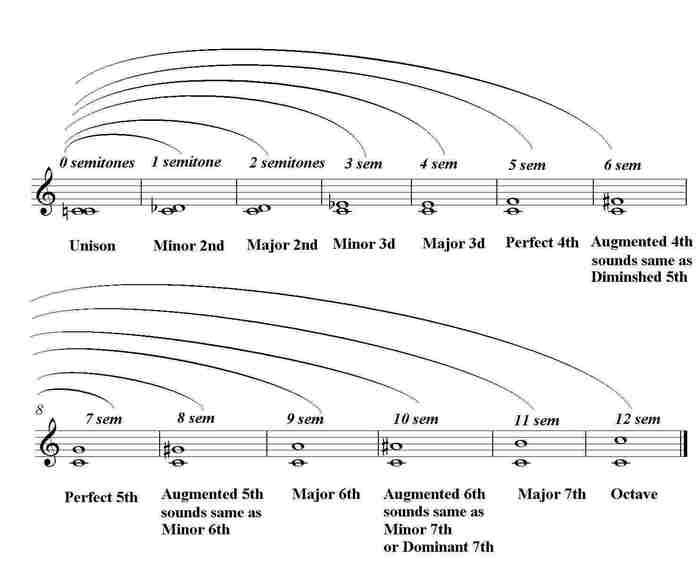 Good, now that we've clarified the notion of interval, let's go back to the tonal system we talked about earlier. What is that all about, you ask? To put it simple, the tonal system takes the twelve semitones of the chromatic scale and arranges them to make the eight most significant ones stand out (although it's actually seven notes, because the note from where it starts, called tonic, is doubled). These eight notes constitute a "diatonic scale." But there are also scales with a different amounts of notes, which we'll see later on.

As I told you before, the tonal system allows you to organize the 12 semitones of the chromatic scale to create diatonic scales. They can be arranged according to two main modes: major and minor. There are (lots of) other modes, but they all stem from these two basic modes. We will look into these other modes in an upcoming article. The notes that make up a scale differ depending on whether the latter is major or minor. The "color" of a song is also affected by this. Put in extremely simplified terms, the major and minor modes could be defined as the "happy" and "sad" modes, respectively.

Here you have two examples that will give you and idea of the differences in mood that you can get depending on whether you use a major or minor mode. The notes are melodically very similar, but the feeling they convey is quite different.

In the next article we'll see how you can create a major or minor scale.