As we saw in article 9, every key has stable and unstable chords. Stable chords don't require any special resolution, since they can resolve to several chords. On the other hand, unstable chords often need a specific resolution, like in the example of the perfect cadence where the V degree calls for a resolution to the 1st degree. This is called "chord-leading." In the table below you can see which chords lead to which other chords:

It's also important to point out that not every chord leading has the same impact. You could classify them according to their decreasing impact as follows:

In an upcoming article we'll see how the first degree of the scale isn't the only that benefits from being reinforced by the dominant. And in yet another installment we'll see what is it that makes chords attract.

However, to finish this episode we could look into the so-called leading-tone.

It's important to note that the leading-tone, in other words the seventh degree of a major, harmonic minor or melodic minor scale, has a strong tendency to resolve to the tonic juts a half step above it (the seventh degree of a natural minor scale, located one whole step beneath the tonic, is not considered a leading-tone, it's called the sub-tonic).

To finish, it's easy to observe that when you use a seventh dominant chord, the minor seventh added to the triad (a three-note chord) based on the dominant results in a tritone (see article 9) with the second note of the chord and an attraction towards the third note of the tonic chord. 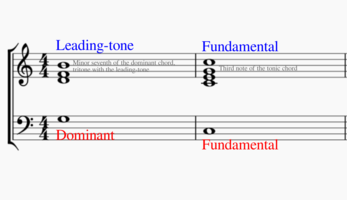