The return of the neighbor tones

Do you recall the neighbor tones? Those we talked about when discussing the circle of fifths in article 3? A quick reminder: the neighbor tones of any given key are the fifth above (or fourth below) and fifth below (or fourth above), as well as all relative scales of these and the original key. As we've already seen, the key signatures of neighbor tones differ only in one alteration (excluding the accidentals of the harmonic and melodic minors). These minor alterations allow for very smooth modulations from one key to the other: the closer the keys, the smoother the modulation. Incidentally, if you take a look at the example we used in article 18, you will see that we modulated from C major to a neighbor tone (F major) by simply adding one alteration (flat B).

The next example also includes two modulations towards neighbor tones:

For a long time, neighbor-tone modulation was the sole type of modulation used. It was only in the 18th century, when the baroque period ends and the classic period begins, that composers started venturing towards other keys.

It's important to remark that the farther from the neighbor tones you go, the farther you get from the original harmonic content and, thus, the more pronounced the modulation will be. When there are at least two alterations (excluding accidentals, see above) between the original key and the destination key, it's considered a distant key modulation. There can be a separation of up to six alterations before it starts becoming enharmonic...something I'll talk about in the next article, don't worry.

In the following example I go from C major to E major. There are four alterations, which means there are four degrees of separation in the circle of fifths: 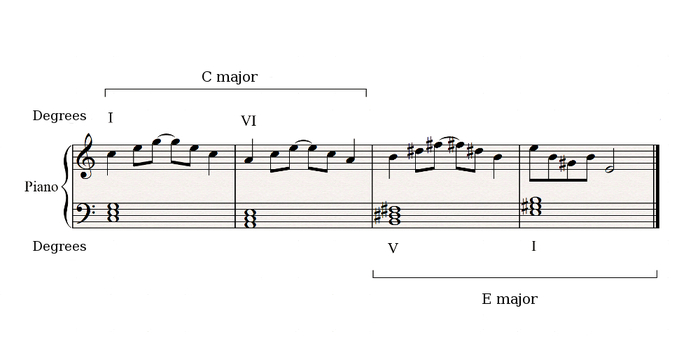 But sometimes you might need to make even more radical changes. And there's nothing better for that than chromatic-key modulation, in other words, a move one semitone above or below the original key. Contrary to what you might think, a chromatic modulation can be very harsh, because it entails the most alterations!

In the following example I go from C minor to C# minor (seven degrees of separation in the circle of fifths). Listen to the effect produced (the last two notes in the first line are for the sake of ornamentation only):

To conclude this article and summarize what we've seen today, don't forget these two rules: