The Other Degrees of a Major Scale and the Minor Mode

The Other Degrees of the Major Scale

The rest of the chords, corresponding to the II, III and VI degrees are minor. And it's important to note that they correspond to the IV, V and I degrees of the relative minor of the major scale in question. Consequently, the major chords of a natural minor scale (degrees III, VI and VII) are also equivalent to the I, IV and V degrees of the relative major of the same scale.

Here's an example to help you see all of this more clearly:

The seventh-degree chord of a major scale has a particular status. Since it's made up of two minor thirds stacked, it is neither major nor minor. It's actually called a "diminished" chord. Although it's more usually considered a dominant seventh chord (see article 4) without a root note.

The I, IV and V degrees remain the scale's strong degrees. In future articles we'll look into degrees and their functions with more detail.

What About The Minor Mode?

So far, as you have probably noticed, all rules and examples I have mentioned in this and the previous article deal primarily with the major mode. But they apply almost the same to the minor mode. However, remember that the minor mode has three scales (see article 2): the natural, harmonic and melodic minor. Which one should you use to harmonize a song? Well, it will obviously depend on the melody and the overall color you wish to provide to your composition. But I can already advance that, in most cases, if you wish to remain within the confines of classical Western harmony, it's better to stick to one of the scales featuring a leading-tone (a semitone between the seventh note and the root of the scale). This means that you have two options: the harmonic minor or the melodic minor.

Why is the leading-tone so important? Well, basically because, as we saw in article 4, if you have the leading-tone you can use the dominant chord, which is made up of the 5th degree of the scale, in other words, a major third (which would be a minor third without the leading-tone) and a minor third above it. And then there's the fact that the leading-tone of a melody tends to "naturally" draw the (Western) listener to the root of the scale. In a future article we'll see how the different degrees of a scale "attract" each other, which can come in really handy when harmonizing or composing a song. I must, however, point out something important: Ever since the 20th century, our ears have grown used to not necessarily resorting to the leading-tone. So it has become more widely accepted to use the natural scale instead of the harmonic one.

To conclude this article, here you have two examples of how a song in minor mode could end. The first one uses the harmonic minor, which, once again, includes the leading-tone and allows you to build a dominant chord in order to get a true perfect cadence, as you can see and hear: 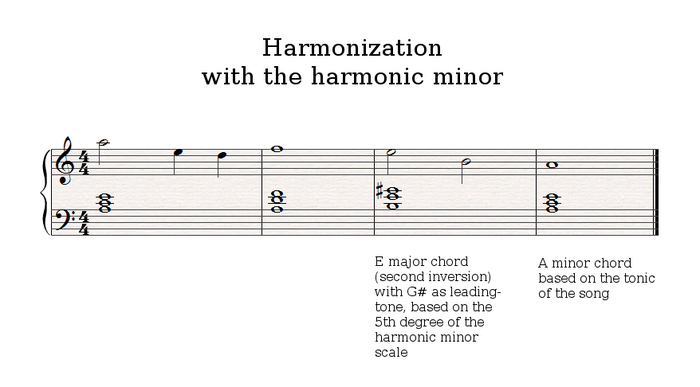 In the second example I use the "natural" minor scale, without leading-tone. The sixth-degree chord won't be a dominant chord in the strict sense of the word and the effect won't be as "leading": 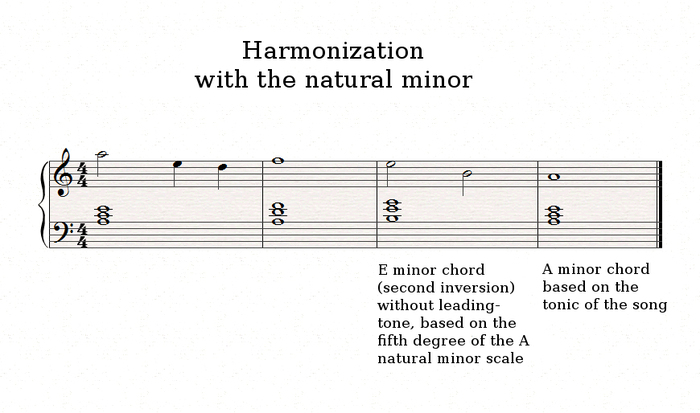 I invite you to join in the next installment to explore the concept of cadence and get to know its main representatives.