In this article we'll keep on exploring voice-leadings related to the most commons cadences.

I'll begin with the plagal cadence.

As you saw in article 7, the plagal cadence adds an emphasis to the harmonic discourse, without having the conclusive character proper to the perfect cadence.

Here's an example of such a voicing: 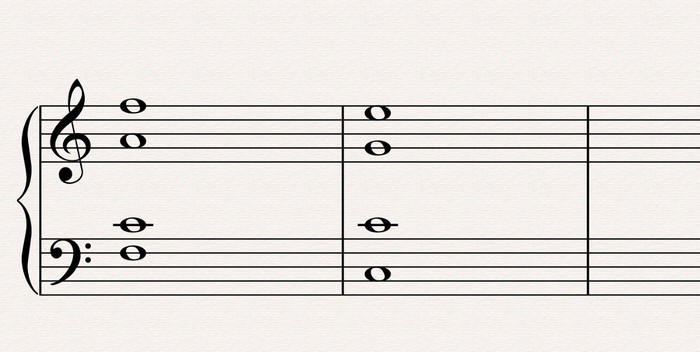 The voices follow this path: the bass moves down a perfect fourth, from the sub-dominant towards the tonic. On the upper voice, the F resolves to E, like in the perfect cadence. In this regard it is worth noting that the fourth degree of a scale has a natural tendency towards the third degree. In the middle voices, the C stays put, giving some stability to the movement, and the A moves down to G in a conjunct motion.

Now let's see what happens with an interrupted cadence.

As you already know, the interrupted cadence is characterized by the surprise it produces on the listener because it doesn't resolve to the tonic of the scale, but rather to the sub-dominant (sixth degree), often entailing a modulation towards the relative key of the song's overall key.
Here's a voicing example based on this type of cadence:

The three chords are in root and open position.

The bass follows an upward conjunct motion across the three chords, followed in parallel by the upper voice. As for the two middle voices, they first move in an oblique direction and then follow a parallel downwards motion. But always conjunctly.

An how about rhythm changes?

Rhythm changes, as you know from article 7, is an extremely widespread harmonic formula which is easily recognizable due to the very specific progression of the bass note: I-VI-II-V. It's this progression that is important to highlight in the voicing.

The progression mentioned above is preserved. On the upper voice there is a pedal tone of the tonic throughout the first three voicings and the movement towards the leading-tone on the last voicing (based on the dominant seventh chord) produces the well-known tension that implores for a resolution towards the tonic. So the upper voice guarantees an overall stability. The middle voices move very little, since they only alternate between neighboring notes.

See you next time to continue our journey through the world of voice-leading!