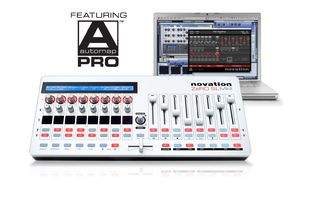 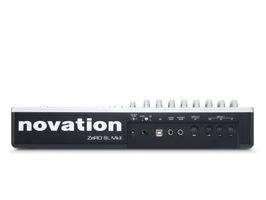 The software that arrived with my original Remote Zero SL (MK1) back in ’07 certainly didn’t disappoint. Plug-ins and virtual instruments that would have usually taken a substantial amount of time to map were instantly displayed across the unit's two displays. The ease and speed of further customisation was also impressive for a version 1.0 product.

Since 2007, I have been an avid user and regular beta tester of the Novation Remote SL line and their associated Automap technology, so when the chance to review the new Mk2 version of the Remote Zero SL came up I was more than happy to take delivery of the unit and give it a test run. 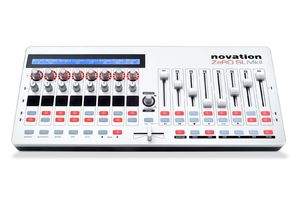 When the Remote Zero SL Mk2 arrived I was particularly interested in seeing what changes had been made to the hardware unit itself. On unpacking the unit it became immediately obvious that they had decided to give the Remote a complete makeover. Although the main case is still plastic, Novation has adopted a silver, metallic effect throughout giving the unit a more impressive finish. But don’t let the plastic case fool you, the build quality is excellent throughout and this thing feels as if it will last. However, it does feel like a studio machine and I’m not sure how well it would hold up to the rigours of a touring act The unit can be used out of the box as a desktop unit or the extra supplied ‘feet’ can be installed, presenting the Remote at a steep angle. I found the latter to be the better option and the viewing angle to be perfect. My last Remote Zero was always propped up on something to get it to a useable angle, so this is certainly a welcomed addition. 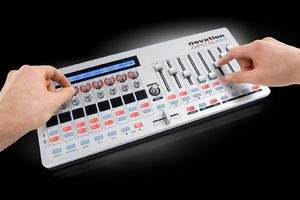 As far as the control panel goes, several drastic changes have been made in this area too. The two screens have been dropped for one. Novation say this is due to the pop up, transparent ‘HUD’ mode now available in the Automap software but you can’t help but feel that this is a money saving exercise. For me at least, two displays were certainly a nice feature on the previous unit and it really is s shame to see them go. Parameters from the banks and buttons on the right hand side of the unit are now displayed on the main display when they are used. This works fine but doesn’t give the user as much of an overview of the instruments current state.

On a more positive note the knobs and faders have seen several massive improvements. First up, pretty much all the knobs and faders have been made touch sensitive. This not only means that simply touching a control will bring up the right row on the display but manual mapping becomes a breeze. You are now able to quickly preview the state of a certain control without even moving it. The top row of knobs on the Remote are now of the endlessly rotating flavour and each one also features a ring of LEDs to show you the current value of that parameter. This is another improvement that allows us to get a good overview of the plug-in we are working on by just glancing at a bank of controls. 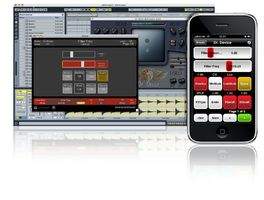 Although the LEDs do suffer from over illumination and light spills into the neighbouring ‘hole’ easily, this concept is a welcome addition and makes me firmly of the opinion that endlessly rotating knobs are generally the way forward. The second row of knobs although touch sensitive, are not endlessly rotating and do not feature any LEDs or illumination. They are instead very similar to the knobs on the original mk1 unit. This is another place in which costs may of been cut but it is certainly not a deal breaker and the unit still works very nicely with these two types of knobs.

Moving onto the other controls we see the eight rubber, velocity-sensitive pads have remained, and below these are two banks of rubber buttons and an extra set to control options and menus. The main difference we see here is that the buttons are now fully illuminated, allowing you to quickly ascertain whether or not a particular control is engaged. This is a big improvement and really adds to the ‘hardware’ experience when editing. On the right hand side of the Remote Zero you will find eight touch sensitive faders. Although there were faders present on the older model they now feature long throw design and are much more capable of controlling mixer levels in the various DAWs’ Automap supports. Below these faders there are two more banks of illuminated knobs, which are great for using as solo and mute controls. These can also double as transport buttons, using the dedicated transport button in the center of the panel. Below this there are more controls for switching modes and controlling the software interface.

Two new additions that reside smack in the middle of the Remote zero are the assignable crossfader and the new ‘speed dial’ knob. The crossfader is likely to be very popular with digital DJs and can simply be used as an extra fader if this is not your area. The new speed dial feature is an interesting addition and allows you to control any parameter your cursor is over, enabling you lighting quick control over any part of your plug-in. 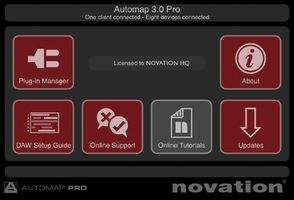 The thing that really makes the entire Novation Remote series really tick is the Automap software the units connect to. Since its conception Automap has provided an automated alternative to the usual laborious manual mapping most of us are used to. At the time of writing this Automap is at version 3.2 for both OSX and Windows systems and updates seem to come thick and fast. This regular development coupled with detailed release notes gives you the idea that the Novation team is more than dedicated to this product.

In the entire time I have been using Automap I have had very few glitches and this is some feat considering that the software talks to pretty much every third party plug-in and DAW out there. Automap manages this by ‘wrapping’ the plug-ins in a special manger application. When this process has taken place you will notice new plug-ins in your list with ‘(automap)’ after the product name. Opening these new versions of your plug-ins will allow them to be automatically mapped to your Remote SL. 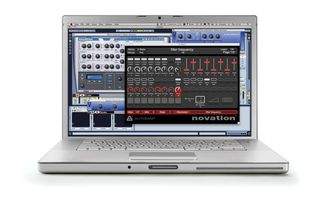 Automap version 3 offers some great features such as midi mode, which allows you to use the Remote SL as a dedicated midi controller for external synths and plug-ins which cannot be ‘wrapped’ by the software. This has worked very well for me in the studio and I have controlled several MIDI synths including Dave Smith’s Mopho. Once programmed these templates can be stored for later use. The interface of Automap has really improved over the years and now you are presented with a HUD type GUI (graphical user interface) that can be made semi transparent and called up via the hardware. Pretty much all of the Remote SL’s controls are accessible via this panel and you can even update the units OS from here.

Although the Automap based hardware isn’t always suited perfectly to controlling every aspect of your DAW it can be used in a virtual Mackie HUI mode and this seems to work very well in Logic at least for controlling levels, pan, track arming and transport features.

The unit I received came with the slightly expanded Automap Pro but if you are running the standard version or did not receive it with your product, you can upgrade for a minimal fee of $30 via the Novation site. The ‘pro’ version gives you several advantages over the standard, including drag and drop mapping of parameters, auto hiding of the software control panel, X/Y pad support and the ability to use multiple Automap devices. If these features aren’t attractive to you then walk on by, otherwise its a small price to pay for the extras. The drag and drop support for me is a must and I’ve found it priceless while creating custom maps for my instruments.

With an average price of €339 (£299) this is no doubt one of the best dynamic midi controllers out there. With its slick design, innovative touch-sensitive, illuminated panel and mature software you can’t go far wrong. This is certainly an improvement on the last model and shows a step in the right direction when it comes to hands on control of production software. It’s a shame that the second display has been dropped and that there aren’t more endlessly rotating knobs on the unit but as I said before this isn't the end of the world. Also it might be worth throwing this in a flight case if you want to take it on the road, though the plastic case, although well made, might not stand up to the rigours of regular gigging.

To sum up, I really love this device, in fact so much that I have hung on to the review model and it has become my controller of choice in the studio ... And this comes form someone who has used, Mackie, Euphonix and Jazz Mutant products.Clear innovative touch sensitive controls