An Overdrive Pedal with a New Look and Feel

Review of the Boss OD-1X OverDrive

Boss refers to the OD-1X as a “Special Edition” pedal, and it certainly looks special. Although it keeps the standard Boss pedal size and shape, and the orange-yellow color of the previous OD pedals, the upper portion of its face features four shiny silver knobs on a mirror-like background, giving it a spiffy look, indeed. Of course, looks don’t count for a whole lot when it comes to tone, so we’ll focus here on what it sounds like.

Before we get into that, let’s take a quick look around the pedal. Those four shiny buttons are for Level, Low, High and Drive. The pedal has a mono input and a mono output, and runs off a 9V battery (included) or a Boss PSA power adapter (optional). The battery compartment and adapter input location are the same as on any other Boss pedal.

Boss introduced Multi-Dimensional Processing technology in early 2013, when it announced its TE- 2 Tera Echo, MO-2 Multi-Overtone, and DA-2 Adaptive Distortion pedals. According to Boss, MDB circuitry imbues the OD-1X with, “superior sound, feel, and response characteristics that are impossible to achieve with traditional analog designs.”

So what about that? Well, in terms of tone, it is different from typical overdrive pedals in one important respect: its frequency response emphasizes the top and bottom end, rather than midrange, which makes it more modern-sounding. Turning up the Low control gives you a serious bottom boost — great for really heavy tones — and the high adds sparkle, without being harsh.

The tone features a ton of sustain, especially on high drive settings. Boss touts “natural compression” as one of the attributes of the OD-1X’s design, and they’re not exaggerating. Everything that comes out of the pedal has a compressor-like smoothness to it. 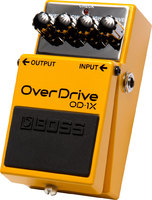 I got everything from slightly crunchy tones to ones that straddled the line between overdrive and distortion. Analog tone aficionados may have problems with the pedal’s less-than-traditional sound, but then again, they probably wouldn’t be interested in an overdrive with digital circuitry in the first place.

Boss touts the responsiveness of the OD-1X, and I did find that it seemed to respond well to the different ways that I played. I was also able to turn my guitar volume down without losing a ton of tone, which was nice.

I tested out with my ESP 400 Series Strat-syle guitar with Fender Lace Sensor pickups into a blackface reissue Twin Reverb, which I recorded into Pro Tools 11 through a Shure SM-57 and a MOTU 828mk3 interface.

This first example features the drive at about 9 o'clock

Here’s a blues progression with two guitars, rhythm and lead, both recorded through the OD-1X. For the lead part, the drive is set at about 1:30, and the Low and High controls at 2 o’clock on the lead track.

In the last example, the guitar is tuned down a half step, and the pedal set to full Drive, Low at 5 o'clock and High cut to 10 o'clock

With the OD-1X ($149), Boss has succeeded in making a pedal that feels and sounds somewhat different from a conventional overdrive. You’ll notice that I put "Less midrangey than traditional overdrive pedals" as both a Pro and a Con. That's because some will like what Boss refers to as the "modern sound" of this pedal, while others may not.

True to its hype, the MDP technology is quite responsive to playing style, and the OD-1X always seems to sound good, no matter what playing technique you're using, or where you set your guitar’s volume control. As to Boss claims of a “superior playing experience” to analog pedals, I’d say, yeah, probably, but not by a substantial amount.

With the OD-1X, Boss has created an overdrive with its own sound and feel, one that many guitarists will find easy to integrate into their rig, no matter what style they play.