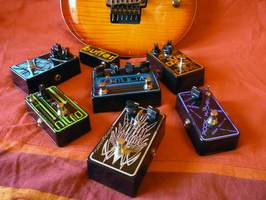 Before creating his own effect pedals, Greg made a name for himself customizing serial models from other brands to improve their sound quality. For example, he turned the awful Metal Zone into a highly musical high-gain pedal, which certainly cannot be considered a minor achievement.

Being a vintage stompbox collector, he decided to create the SolidGoldFX product range based on his own old-school collection and with the goal of offering modern-vintage sounds. His products have a vintage soul but feature a modern approach regarding dynamic response, sound clarity and respect of the instrument's personality.

We'll try to give you a good overview of the SolidGoldFX product range in this review. On today's agenda, you'll find two overdrive/distortion pedals (High Octane and Super Drive), two fuzz effects (Formula 69 and Formula 76) and a couple of boosters (Nitro and Rock Machine).

But before plugging in the guitar, let's take the products out of their golden boxes and compare them. 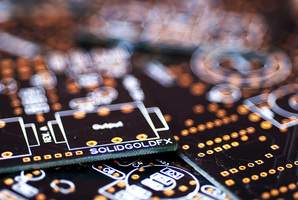 SolidGoldFX stompboxes come in rugged metal housings that recall MXR products in size and look, be it the compact (most of the pedals) or king-size models (Formula 76). Unfortunately, like MXR products, you'll need a screwdriver to replace the batteries or use them with an external power supply, when this feature is provided, of course.

Each pedal has a silkscreen with a different color on the front panel and the typeface evokes the pedal's spirit. For example, the Formula 69, which is a typical 60's fuzz, uses psychedelic letters, while the Formula 76, which is more into the 70's, recalls the disco years. The silkscreen is very clear, which we really appreciate, considering that most boutique manufacturers hand paint the name of the controls on the housing. In this case, the silkscreen looks professional and it is easily readable, except for the Super Drive whose jam-packed design makes reading the control functions a bit difficult.

Every pedal comes with adhesive plastic pads and it is up to the user to decide if he wants to use them or not. That's a nice detail if you have a pedalboard and want to fix Velcro strips on the bottom.

Each pedal is provided with a spec sheet that includes an explanation of the concept behind it, a description of all its controls and the pedal's assembly in detail.

That's how we discovered that all SolidGoldFX have true bypass and use high-quality components: Neutrik I/O connectors, specially selected potentiometers (you'll feel it as soon as you turn them) and gold-plated PCBs (does it have anything to do with the brand's name?). The on/off status is indicated by one or several large, white and very (very) bright LEDs.

Enough chatter, it's time to see if the stompboxes' features are on the same level as their look.

First Course: Overdrive and Distortion with the High Octane and Super Drive 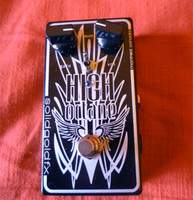 These stompboxes have a very different philosophy. Let's start with the "softer" High Octane.

Its sound ranges from crystal clean to light overdrive. The distortion could be compared to an old Ibanez Tube Screamer, even though the sound color of the High Octane is very different. The pedal includes gain and volume controls, as well as a switch to select the operation mode. Don't go looking for a tone control, Greg explains that it is not needed because the effect was conceived to provide a well-balanced frequency response.

Listen to the following sound samples to corroborate it yourself. I used a Jet City Amplification JCA 20H with a Torpedo (V30 Marshall speaker cabinet) to get a perfectly clean sound. The guitar is a Kraken Flagman Real Axxe, which has a Les Paul sound.

In the first mode, the pedal provides a well-defined, sharp and clear overdrive that faithfully reproduces the character of the guitar. Every single nuance is accurately captured and it is true that you won't need a tone control to adjust the frequency response.

The second mode adds a germanium transistor into the signal path, resulting in a more vintage feel – the typical germanium creamy character. Attacks seem to be a bit more compressed and the lows bigger. Nevertheless, there is no need for an additional control: just plug, turn the knobs and play! Nice and surprising!

The pedal has a nice-looking – however unreadable – orange silk-screen, and it features three controls: gain, presence and volume. Their layout is a bit perplexing: usually, you have the gain control on the left and the volume control on the right but it is the opposite on the Super Drive.

This effect takes you back directly to the 70's! Its raw sound recalls well-known pedals like the old MXR Dist+, the DOD 250 and other stompboxes of the same decade. Depending on the settings, you'll get a light overdrive or a strong distortion effect, a muffled sound or a very bright one (depending on the position of the presence control). It isn't hard to find a vintage rock sound, like the one in the following sound samples.

Keyword: vintage, bring on the fuzz!

The first thing you'll notice about the Formula 69 is its (very) psychedelic look and the product manual will confirm that idea: the Formula 69 is a Fuzz Face clone. However, unlike its ancestor, the effect uses silicone instead of germanium transistors, which are known as temperamental (they are temperature and humidity sensitive). In order to avoid the aggressive sound of silicone transistors, SolidGoldFX explains that they have been hand-selected and hand-matched.

The stompbox has three controls: fuzz (for the gain setting), volume and bias (to adjust the sound character), as well as a tone miniswitch that cuts more or less low frequencies.

The first time I used it the sound really struck me. I usually don't like fuzz stompboxes because of their aggressive sound, but this one allows me to color a clean sound just slightly – as in Hendrix recordings – while also providing the creamy fuzz effect typical of the end of the 60's and beginning of the 70's. This pedal is incredibly musical and absolutely recommended if you want to rediscover the spirit of Cream, the Yardbirds, Hendrix and all those fuzzy songs of the 60's. 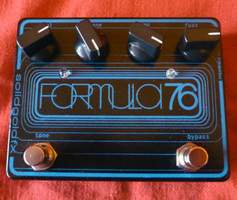 The Formula 76 is radically different. For starters, it's bigger (like the MXR stereo chorus and MXR flanger) and it has two switches and four controls, whose layout is somewhat unusual (like on the Super Drive): from left to right, you'll find volume, tone, comp (compression) and fuzz. The effect has a bigger housing because it features a second footswitch to select the operating mode. Both modes sound radically different: you get either a contoured response or a sound with enhanced mids.

Unlike the Formula 69 that resembles the Fuzz Face, the Formula 76 sounds more like the Japanese fuzz effects of the mid 70's (Univox Superfuzz, Ibanez Standard Fuzz, etc.). The Formula 76 provides a thick, aggressive tone. It is an octave fuzz effect, so it sometimes produces interactions that recall a ring modulator effect. The mode footswitch allows you to change instantaneously from a full fuzz sound to a very acid fuzz. The most surprising thing is that even though the sound is heavily loaded (nearly chaotic), it always remains very musical.

Nitro and Rock Machine are boost effects. Both share the same layout and controls (a single boost knob and a miniswitch).

The Nitro is meant to be a modern two-mode booster. In Clean mode, the effect increases the dynamic response and improves the brightness while the guitar's frequency range seems wider. In Dirty mode, the pedal can be used as a light overdrive.

The Rock Machine is a germanium vintage booster. It was more or less inspired on the Dallas Range Master, the small magic box that was Tony Iommi's, Brian May's and Jeff Beck's secret weapon. It has two modes as well. In rock mode, the pedal works like a classic Range Master, while in blues mode the low end is also boosted producing a "dirtier" sound. The only disadvantage of the pedal is that it uses a special germanium transistor and the wiring has a positive ground. This means that the pedal cannot be powered with a daisy chain power cord (which allows you to power several pedals with a single power supply) because it would burn the germanium transistor. Therefore, you'll have to power the stompbox with batteries, a dedicated power supply or an isolated output of a multi power supply.

How do you use these boosters? They are most commonly used to increase the distortion of a tube amp. They are also used to add the booster's sound color to the amp's, in which case you'll have to set the boost to unity.

You'll quickly hear the sound difference between both boosters if you try the latter. The Nitro doesn't change the sound of your amp too radically, it rather gives it a more vivid tone. But it allows you to easily change your JCM 800 into a high-gain amp.

The Rock Machine adds the germanium sound color to your amp. Once you try it, you'll hardly do without it! The sound becomes creamy and vintage. The effect magnifies your amp's sound... This pedal will make you understand the passion some musicians feel for the original Range Master. Personally, I became addicted right away.

All six stompboxes we tested have unquestionable positive features. I strongly recommend you to test them if you are looking for vintage-sounding products with higher versatility than the original models. The icing on the cake is that all stompboxes can be combined together to create more complex sound colors. For example, the Super Drive is transfigured by the Rock Machine, and I even achieved a Kyuss-like sound mixing these two pedals with the Formula 69!

Regardless of whether you are a blues, rock or stoner fan, give these made-in-Montreal stompboxes a chance. Bloody good tone guaranteed!