AmpLion Pro runs as a standalone program or a plug-in (Mac/PC). Its features are the same in both versions, except that it has a file player and recorder with pitch and time controls in the standalone.  As of version 1.1, it runs under VST, RTAS, AU, and AAX, and supports 64-bit operation.

When using it with a DAW host, you can open AmpLion Pro as a mono plug-in in a mono track or as a stereo plug-in in a stereo track, but strangely, not as a mono-to-stereo plug-in in a mono track. So if you want to take advantage of its stereo effects, and stereo capabilities, you have to use it in a stereo track. The problem is that most of the time you’re recording a DI guitar track, you’re doing it in mono, which means you either have to convert it to stereo and then apply AmpLion Pro, or record it mono into a stereo track. The latter works fine as long as you’re using AmpLion Pro on the track. But if you decided after the fact to use a different plug-in, you’d have to convert the track back to mono, or you’d just hear it on one side. Yes, you can work around this somewhat odd architecture, but I don’t understand why Audiffex doesn’t follow standard practice and offer mono-to-stereo instances of the plug-in. It would be a lot simpler.

While the Fender, Marshall and Mesa/Boogie models are amp types you find in virtually every amp modeling plug-in; the Engl amps are less commonly modeled, so they give you some sonic choices you don’t find in a lot of other applications or plug-ins. On the other hand, AmpLion Pro has no Vox AC30 model, which some might consider a pretty big omission, and no models of Orange or HiWatt amps. 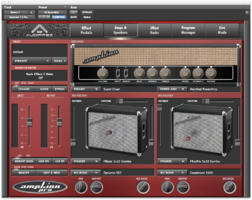 The way AmpLion Pro is structured, you have a preamp model and a power amp model, going into either one or two cabinet models, depending on how you set it. When you switch to a factory preset from a different amp, you’ll get a matched preamp and power amp, as well as matched speaker models. However, you can interchange all the components to make your own combinations.

The matching power amp models don’t appear in the Power Amp menu that you use for making hybrid preamp/power amp combinations. However, there are six other choices. Among these models are power amps corresponding to most of the amp types (except for the Engls), and  if you dial in say, 6LG Super 50W power amp with the Super Clean preamp model, the graphic changes to a sort of split screen, with the preamp on the top and the power amp on the bottom. So they look and sound different from the power amps you get with the matched choices.

Twelve different speaker cabinet models are available, including corresponding cabs for the included amp  models. Cabinet models run the gamut from 1x10 to 4x12, and include open-back, closed-back and combo configurations, depending on the amp.

The speaker section allows you to choose one or two speakers in your configuration, and you can pan them if you want. I was able to easily dial in some really big rhythm guitar sounds with a two-speaker configuration panned hard left and right.

You can have a separate virtual mic on each of the two cabinet models, if you’d like, and choose from a selection of mic models that’s a little different from what you find on most amp modeling software, with the exception of the ubiquitous SM57 model. AmpLion Pro offers six other mics, some of which are modeled from more budget-oriented mics than you normally see in this type of software, including an AKG C1000, Audix D6, Audix i5,  and Røde NT1-A. The other mic models are a Sennheiser MKH40 condenser, AKG D112 dynamic, and AKG C451 condenser. The D6 and the D112 are dynamic mics designed for kick drum, but are used on guitar cabinets, especially for metal.

AmpLion Pro offers a ton of flexibility for changing mic position, and unlike some modelers, you can significantly change the tone by moving the mic. Not only can you move it side to side on the speaker cone, but up and down, and forward and back. Plus, you can change the mic angle.

Another interesting wrinkle is the Convolution setting for the cabinets. It offers the ability to load custom impulse responses of speaker cabinets. You have to supply your own IRs, however. I found several sites online for downloading IRs, including some free ones, and I successfully imported some into AmpLion Pro.

Most of the amp models offer onboard spring reverb emulations, and you can add additional effects via the Effect Pedal and Effect Rack tabs. Pedal effects include six different wahs (including one autowah), eight different overdrive or distortion pedals, including emulations of classics like the Tube Screamer, Rat, Metal Zone and more. 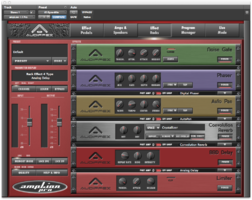 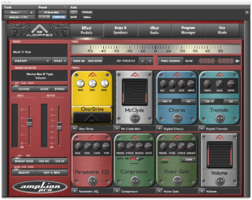 You also get two different phasers, two tremolos, three flangers, three choruses, two compressors (including an MXR DynaComp emulation), a noise gate, parametric and graphic EQs, an octave divider, and a volume pedal. You can have up to eight pedal effects active at a time. The Pedal Chaining feature lets you globally change from a serial to parallel effects routing. In the Rack Effect section, each effect can be switched between effects loop and post-amp routing.

Up to four rack effects can be used simultaneously, plus a gate and limiter which are always in the rack, but can be turned on and off . The effects choices are mostly the same, although the rack effects are where you add delay and reverb. For the former, you get analog delay and digital. The reverb choices include a digital reverb and convolution reverb. The convolution reverb comes with a few onboard impulse responses. However, like with the speaker cabinets, you can load your own IRs, and there are some good reverbs available online.

One of the most handy aspects of AmpLion Pro’s user interface is the Parameter Display window, which gives you a large numerical readout when ever you change a setting.

AmpLion Pro’s Live Mode offers a large and simplified display for live performance. You can use the Program Manager feature to load your favorite presets (either factory or your own), and switch between them live with the press of a large button (or a MIDI command). You can automate all of AmpLion Pro’s parameters through your DAW’s automation when using the plug-in version.

The standalone version of AmpLion Pro features a file player and recorder. The UI is rather cryptic, and it takes some trial and error to do what should be obvious, like opening the player (who would have guessed a large button entitled “E” would do this?) and turning on the recorder. 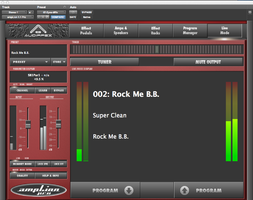 The record button appears on when it’s off and off when its on, which adds to the confusion. There are buttons to include the effects and the output of the player in the recording, but I wasn’t very successful getting it to work consistently. This feature needs to be fixed.

In the player window, the Add button lets you load in audio files. I tried with MP3, MP4, WAV, and AIFF, and all loaded successfully. Once a track is loaded, you can speed it up and slow it down without changing pitch, and pitch change it plus or minus 12 semitones, and fine tune that by plus or minus 50 cents. The pitch change does affect the speed.

Now that we’ve gone through the features, let’s focus on the most important part of any amp-and-effects modeling software: its sounds. I liked the clean Fender sounds quite a bit. I found them realistic sounding for the most part, and they held their own with similar sounds in other amp modelers. Here’s a comparison with AmpLion’s Deluxe Clean model and AmpliTube 3’s ’57 Deluxe.

Next, here’s a comparison of AmpLion’s JCM800 model with IK Multimedia’s AmpliTube on a crunchy rhythm part.

The character of the sounds are different, as AmpLion’s is more ringy, while AmpliTube’s is beefier.

Although the Guitar Rig sound is a bit smoother, AmpLion holds its own pretty well.

In this example, you hear the Engl Tube Preamp 530 model, with stereo delay and a slight cut on the graphic EQ at 100 Hz. In this patch, the cabinets are panned hard left and right, giving it nice stereo effect.

As for the effects, I liked some but not others. The wahs were impressive, especially the McClyde, which is modeled from a Vox Clyde McCoy wah. Here’s an example with the Super Clean (Super Reverb) amp model.

The flangers, phasers and other modulation effects are solid. As for the reverbs, the spring reverb emulations on the amp heads and the digital reverb rack effect are both fine. The convolution reverb could use some parameter control. All it has is Wet and Dry knobs.

The distortion and overdrive effects are solid. For example, here’s the “Metal Tone”:

AmpLion Pro ($99) offers a lot of features for the money, and its amp and cabinet models are mainly pretty good. I like the control you get for changing mic position — it’s effective and well implemented. AmpLion Pro is relatively new, and is still a bit rough around the edges. It could use a better manual additional amp sounds to round out the collection, a more consistent effects section, and a UI revamp for the recording features in the standalone version.

Audiffex offers a demo version that’s fully functional except that the audio is designed to drop out every once and a while. If you want to check AmpLion Pro for yourself, that’s the best way to go.

Editor's Note: Since this review was originally published, Audiffex released version 1.1.2 of AmpLion Pro, which adds the capability to open the plug in in a mono-to-stereo configuration.