Headphone mix for the singer - Part 2

Those of you who have been following this series probably recall the best way to minimize the dreadful impact of crosstalk, which I discussed about 10 months ago: you only have to use the directivity of mics to your advantage. In fact, if you place the speaker at the "blind spot" of the mic, in other words at the angle where the mic's capsule rejects more sound, crosstalk will decrease a lot. If you were to take a figure-8 mic, for instance, your setup should look like this: 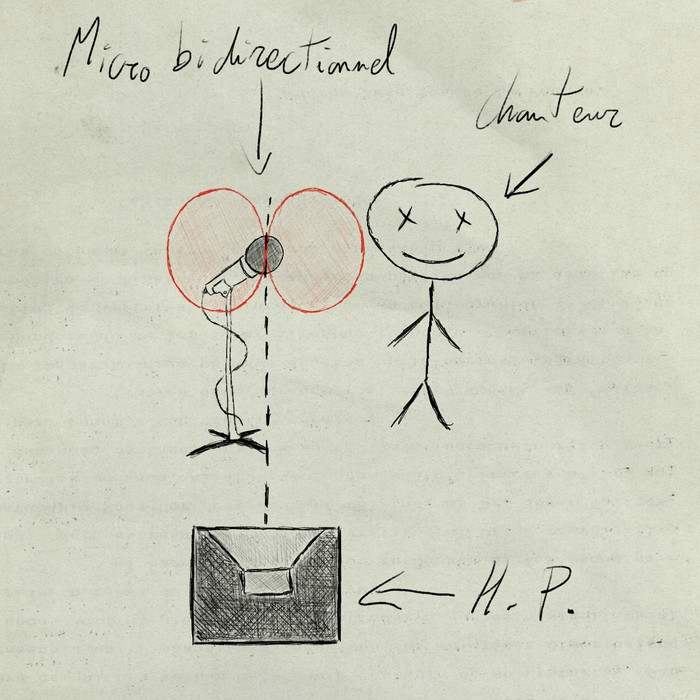 I hope that despite the poor quality of my drawing — I'm no designer you know! — and it being in French, you can understand the way you should proceed. Judge the results for yourself:

On the first clip I used an AKG C414 in figure-8 mode with the low-cut filter set at 75 Hz and placed in front of the monitor speaker, which is the worse situation. On the second clip, the speaker is set right at the rejection axis as shown in the drawing above. It's easily to realize that the crosstalk is much less, isn't it? And you can do even better!

During this recording session of my own voice I also tracked the crosstalk on its own. What I mean by this is that I used the exact same setup as for the other take, in other words me standing in front of the mic with the C414 in figure-8 mode, the low-cut at 75 Hz and the speaker at the blind spot of the mic, but I wasn't singing. This results in the following:

It's not very exciting by itself, I know... But if you invert the signal's phase and mix it with the previous clip, you get this:

Amazing, isn't it? What's left of the crosstalk is easily manageable. A simple gate during mixdown or a brief editing session ought to be enough. Isn't that nice?

And you can also use this trick with a cardioid mic:

On the first clip I recorded my voice with the C414 (cardioid mode / low-cut filter at 75 Hz) and a speaker for the cue mix on one side. For the second one I placed the speaker like in the drawing above to reduce crosstalk: 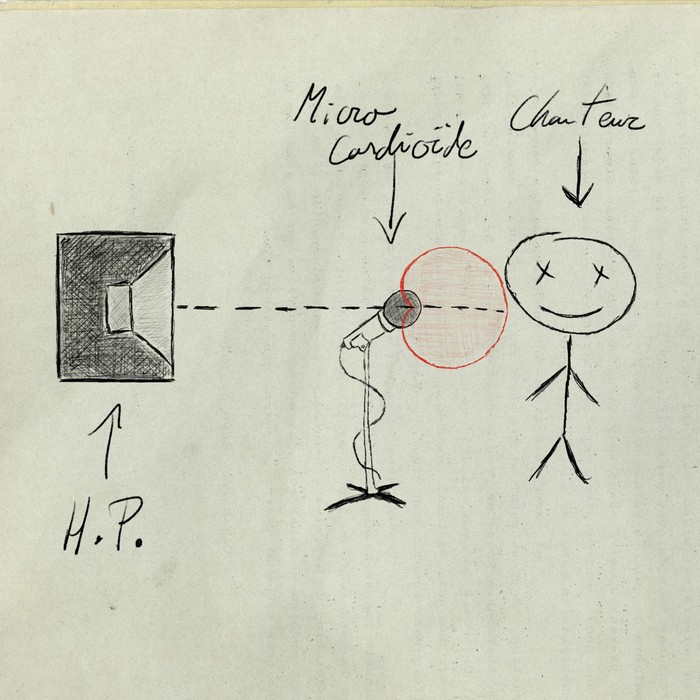 The third clip is the recording of the crosstalk like on the previous example. Finally, the last file is the mix of clips 06 and 07, with the phase of the latter inverted. Once again, the crosstalk remaining is so little, that you shouldn't have any trouble dealing with it during mixdown.

As you can see, it is possible to record vocals without the use of headphones. But be careful, in order for this trick to work properly, you need to respect a couple of rules:

And that's it for today. I hope this trick is helpful during your upcoming recording sessions. See you next time for some new adventures in recording!