How to organize for a recording session

A home studio owner is usually an artist and music producer, but also an audio engineer responsible for all the stages of production, including mastering and mixing. Hence, you should avoid any shortcuts at the beginning of the chain to not make the subsequent tasks more complicated than they ought to be. Especially considering that it isn't really that hard, you just need to be organized. Actually, the following advice we'll seem obvious to anybody who is already somewhat methodical. I nevertheless think it's necessary to address the issue because it's not uncommon for people to have a true "digital chaos" in their hard drives and/or sessions, which obviously takes its toll on their technical and artistic productivity.

First off, I recommend you to create a folder for each song that you want to record where you will put everything related to that song following a logical structure. Take, for instance, the song Nonetheless, which I recorded especially for these articles. I created a folder on my hard drive named Nonetheless with seven subfolders:

Having to do this for every song you record can be pretty tedious, so to speed things up I use a script created with Automator. Whenever I launch the script a dialog box pops up and asks me for the name of the project, creating all necessary folders automatically afterwards. Automator is a utility included with Mac OS X, but if you are on a PC running Windows, there are some free alternatives available. 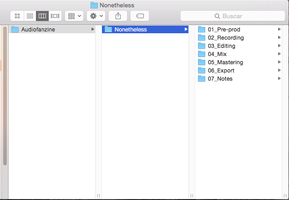 Anyway, I believe the names of the first six folders are self-explanatory and require no further clarification. However, the last one might be a bit confusing. I use the Notes folder to place all my observations and other remarks related to the project in question which arise during the production. In other words, it's full of text files that make up a sort of log where I carefully record all the actions I have taken. I write down the mics I choose and their placement, the preamps, compressors and EQs I use, and what I want to achieve with each song. I often attach pictures of the placement and/or the settings (preamps, EQs, compressors, but also of the instruments, pedals, guitar amps, and more, depending on the case). And it doesn't just stop here, because this log gets bigger during the editing, mixing and mastering stages.

I know it seems like a very boring task, but trust me it's definitely worth the extra 10 minutes every session considering the advantages of having the log up-to-date for future references. For starters, if somewhere along the way you discover a serious mistake, you can always recreate the exact conditions with the information you have written down and put a remedy to it. Furthermore, this log will also help you to look at your work from a distance. This can prove very useful, especially when you work in a closed environment, like is usually the case in a home studio. It will help you sharpen your critical eye. And finally, you will be able to revisit your work several years later without asking yourself "why in the hell did I do that and how did I do it?"

Regarding your sessions, I suggest you read this article I wrote for the mixing series, as well as this one written by my colleague Mike Levine. You will find there a bunch of really useful tips that you can put to use right away. This will spare you from having to do it later on wit the additional benefit of preserving some coherence within your DAW throughout the entire production chain.