How to use harmonic distortion in a mix

At this stage, you have probably already used some sort of analog-emulating compression or EQ plug-in on many of your tracks. It obviously wouldn't make any sense to try to go back to what you did then. Especially considering that the glue effect is the sum of efforts and the addition of layers only adds substance to it. For the time being we will focus on the track groups. As I explained to you earlier, you need to use compressors and/or EQs emulating analog gear and have them running at the bare minimum. Choose the plug-ins so that the coloration they add matches your idea of the mix. Then follow the principles explained last week to play with the harmonic distortion.

The problem with harmonic distortion is the amount thereof, as we discussed in the previous article. In my opinion, harmonic distortion is to music what salt is to food. Indeed, sodium chloride is an essential element in the kitchen, but it has to be used judiciously. When a dish doesn't have any it tastes dull but when it has too much it's uneatable. Besides, salt is used at all the different stages: before, during and after cooking. And while it's very easy to put salt on a dish, it's impossible to take it out afterwards. In short, it all boils down to the preparation of the dish itself. 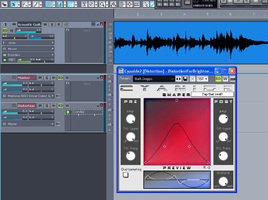 Well, when it comes to harmonic distortion it's pretty much the same: you must proceed cautiously and wisely when "seasoning" your mix. The big difference in the digital audio world, however, is that you can always go back to any given point and take out or change the amounts of distortion applied during the mix. Hence, if you follow the method described below, you should be able to add harmonic distortion avoiding too many risks.

This way of doing things is relatively simple and consists of two stages. The first step is to listen very carefully whenever applying a plug-in that generates distortion (a "vintage"EQ or compressor, for instance). As soon as you start to hint the appearance of harmonic saturation go back a dB or so. Once you've done that to all the elements concerned, take a pause to let your ears rest. When they are ready to go again, move to the second stage and listen to the overall result, comparing the results with and without harmonic distortion. Generally speaking you ought to notice that it adds a light coloration, as well as more coherence, but that's it! The difference ought to be so subtle that a distracted listener doesn't notice the effect. If that's not the case, go back to the first step again.

I know this method is relatively time-consuming, but don't worry, your sonic perception will become keener over time and you will not have to go through this that often in the future.