The Phaser and the Flanger are often mistaken. However, while they sound pretty similar, the concept behind both of them is completely different. Where the Flanger uses a delayed signal to create a comb filter, the Phaser employs a system of filters with phase inversion. The result is that the waveform of the signal is altered with "dips" like with a comb filter but the difference is that these dips don't respect a harmonic series. And it is this difference that makes the Phaser sound less appealing to my ears, at least. I rarely use it. But then again, I should probably mention in it in this series, right?

Luke, I am your Phaser

The Phaser is often used on synth pads. But be careful not to overdo it, the spirit of Jean-Michel Jarre will be haunting you whenever you use this effect. On electric guitars it can help you get a '70s-like sound. It can also be used on vocals, sparingly, to give them a sense of rhythmic movement when they are somewhat sluggish. Finally, just like the Flanger, it's often used on the entire mix to reinforce the dramatic effect from a musical point of view.

For a change, here's a small, non-exhaustive list of some of my favorite Phaser plug-ins. 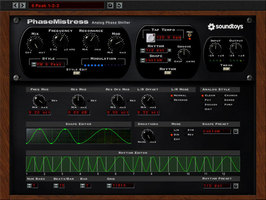 I'll start, once again, with Blue Cat Audio's free Stereo Phaser. And then there's OhmForce's Mobilhom which even if not the newest kid in town it still remains one of the most respected virtual Phasers. And how could I forget the Uhbik-P included in the Uhbik bundle by U-He. Finally, to get an effect with more character, I suggest Fazortan by D16 Group or the famous Phase Mistress by SoundToys.

And that's it, we are done reviewing audio modulation tools. It was brief, I know, and I could've certainly mentioned them earlier in the series. But I thought I'd leave them for this stage of the process considering that they are used occasionally and the sense of movement they provide are a great prelude to the last phase in our journey, namely automation! But before we go into that, in the next article we'll do a recap of everything we've done so far to be able to approach the last stage with the best ethos.