The upright bass (aka double bass) is an instrument from the string family. It is the lowest-pitched bowed string instrument, normally going down to E1 (41 Hz) but it can even go down to B0 (31 Hz) on five-string versions. Hence, you need to pick a mic that can faithfully capture this frequencies when recording it. 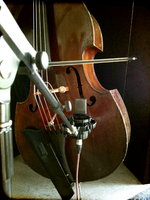 Before moving onto the practical part, there are two important things you should know. Firstly, the instrument rests solely on the endpin, which can unfortunately transmit vibrations... If the room has a wooden floor, for instance, the latter could work as a sound box and end up polluting your recordings. So bear this in mind and try to isolate the endpin as much as possible using a thick rug or a mini-deck on a rubber mat, if need be.

The second remark applies to all sorts of acoustic instrument, not just the upright bass. This kind of instruments are imperfect by nature and hence feature more or less pronounced discordant resonances. Even the best instruments have this, although the degree of imperfection certainly decreases. Don't hesitate asking the musicians about this point, since they ought to be the ones who know their own instrument best and hence give you useful pointers in this regard. Your goal is to be able to choose the best mic and/or placement in order to reduce as much as possible this issue. For example, the bass we used for this session tends to resonate excessively to D, according to the owner. So I put special attention to the D during recording and will do the same during mixdown.

Since the double bass used features a pickup, I wanted to see how it would sound when recorded using it: 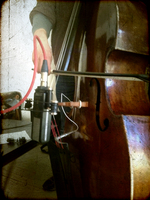 As you can hear, it's nothing to write home about. For the next article we recorded a pizzicato upright bass and the pickup isn't such a bad idea, but in this case it's clearly no use.

Let's see what we can achieve with a mic now. I used pretty much the same placement for all takes: I put the mic 5.9 to 15 inches (15 to 40 cm) from the highest string, slightly below the bridge and pointing towards the body of the instrument (see pictures). Do note that I avoided pointing the mic towards the bridge in this case because it usually makes the sound more aggressive, which isn't exactly the right effect you want to get when playing an upright with a bow. You can actually use the lower end of the F-hole as a visual reference.

The following clip was recorded with a C414 in omni mode, no pad and no low-cut:

The result is certainly more interesting than with the pickup but it still lacks some substance, not to mention the unavoidable imprint of the room on the sound, given the mic's directivity. By the way, do note the resonance of the D (third note), as foreseen.

The next clip is with the C414 but in cardioid mode:

The outcome is much more coherent, with more fullness and with less presence of the room. The proximity effect of the cardioid polar pattern can actually be an advantage in this case. But be careful, if it gets too intrusive, move the mic a bit further away.

Once again, the polar pattern (figure 8) captures too much of the room for my taste, but the overall result might be quite interesting. The "smoothness" of this type of mics attenuates the "aggressiveness" of the bow, which can be very useful depending on the sound you are looking for.

To finish, here's an example of a small diaphragm mic, the Oktava MC012: 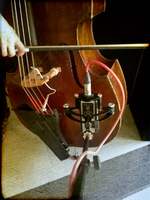 Even if the result is the complete opposite of the Sigma, it's not less interesting, because the gain in mid highs can make it easier for the double bass to stand out in a "modern" music mix.

And that's it for today. As usual, consider these methods as a point of departure for you to start experimenting in order to get the sound you want for your own songs. If your place allows it, play a bit with the distance moving the mic away from the bass. This can be especially interesting with a cardioid mic, to try to find a balance between the mids and the lows to get a more "natural" result. But don't get me wrong, "natural" doesn't mean "easy to mix." Don't forget the famous Golden rule #1 of recording.

A big thank you to Colin who kindly accepted to give my a hand with this and the next article. And even more so, because this is a sort of premiere for him, since playing with a bow isn't really his thing and he nevertheless decided to come out of his comfort zone for you and me. Colin is the bass player for the Chozpareï, a must-see act in the Montpelier scene, as well as for Tana & the Pocket Philharmonic, a fascinating new band that will shortly start making waves in the French scene both for their music and their fondness of going on tour.