The trombone is a wind instrument from the brass family. To be able to record it under the best possible conditions you first need to understand its particularities. First of all, you must know that the sound is emitted exclusively from the horn, in other words the wide mouth at the end of the instrument. So this is where you'll need to focus all your efforts.

Next, you have to consider that a trombone can produce an extremely high sound pressure level. This means you'll have to be specially careful when recording it with your most sensitive/fragile mics in order to get a decent result and, especially, to not damage your gear.

Last but not least, the attacks of the sound produced can be particularly "plosive," which you'll have to take into account when placing the miccrophones. You might even want to consider using a pop filter to avoid any nasty surprises.

Let's move on now to the practical examples. I'll put forward three different methods to record a relatively simple melodic line played by a trombone. In all three cases I'll use two acoustic panels placed behind the musician to try to isolate the mics as much as possible from the polluting sound reflecting from the back walls, which are the closest. 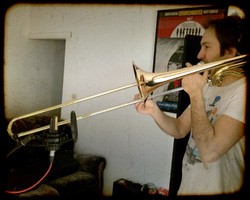 For the first method I used a C414 condense mic in cardioid mode. I placed it at a distance of 20 to 28 inches (50 cm to 70cm) from the horn with the -10 dB pad on and a pop filter, just in case. The low-cut filter is off. As you can see in the picture, the mic isn't aimed directly at the center of the horn, it's just slightly below. Why, you ask? First, because despite the distance, the pad and the pop filter, aiming it directly at the center might be "dangerous" with this kind of mic whose sensitivity is pretty high. When placed just a bit off center the SPL is lower and there's less risk of a "pop." Second, the C414 is well known for its brilliance, however, trombones are not exactly what you'd call brilliant, not even a tenor trombone. Placing the mic off center you can reduce significantly the highest frequencies coming from the horn, since they are very directional. Hence there's less of a chance for the C414's brilliance to become an issue. This is what the result sounds like:

It's interesting but might not fit every production. The brilliance of the AKG mic will certainly work fine on pop songs, but for other genres you might need to try something different.

For the second take I used a the e609, a dynamic cardioid mic, which can handle pretty well high SPLs. And it's not as brilliant as the AKG, meaning I could place it closer to the horn (8 to 12 inches) and on-axis, with the pop filter, though!: 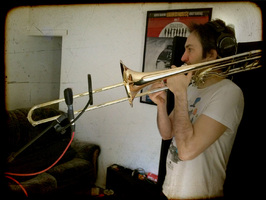 The result is more typical and, especially, much more "compressed." While less natural to the ear, this sound will work wonders on roots reggae productions, for instance. And it shouldn't come as a surprise if you stop to think about it for a moment, since brass instruments are usually miked like this onstage for this kind of music. Hence, even if the result is not very realistic it matches perfectly with a particular musical aesthetics deeply rooted in our collective unconscious.

The last take was recorded with a ribbon microphone, the Sontronics Sigma. This type of mics are particularly fragile so I placed it much farther than the others (between 28 and 39 inches from the horn). Moreover, rather than aiming at the horn, the Sigma points a bit below it with an off-axis angle of around 30º to 40º. Why do I do this? Well, this inclination will reduce even further the risks due to the high SPL and/or attacks, to the point that the pop filter is not even necessary. On the other hand, this placement allows me to make the sound a bit more "lively" and natural, due to the bidirectional nature of the Sigma, which also captures a good deal of the room's environment. But it's no too invasive, given the "veiled" character of the high frequencies when recorded with a ribbon mic. Judge for yourselves:

The sound obtained can be as smooth as you want it to be. This smoothness will be particularly interesting for jazz or classical music productions.

And that's it for today. Do note, however, that the recordings presented here are out of context. My sole intention is for you to consider these methods as a point of departure for you to start experimenting in order to get the sound you want for your own songs. Because, even if I might sound like a broken record I must insist on the fact that the more you commit yourself to getting the right sound at the source the less work you'll have afterwards!

I would like to thank Arnaud Arbalète for having agreed to dedicate a couple of hours of his precious time to record the audio clips for this article. And it's only natural that he is the first of many musicians to take part in this series since we've been friends for almost twenty years now. He is truly passionate about the trombone. In fact, when he was four years old he told his parents that he would be a trombone player or nothing. This impulse led him to make his way into the No Named Family, which has allowed him to share the stage with the likes of Groundation, Jimmy Cliff, The Congoes, Alpha Blondy, Max Roméo, Barrington Levy, Sinsemilia, and Yannick Noah, among many others. His stubbornness has paid off, don't you think?

Anyway, thank you Arnaud – for this and everything else!