I'll start with a brief reminder, just in case. The role of the overheads is basically to capture the sound of the cymbals as well as the stereo image of the whole kit. But this definition is a bit reductionist. Overheads are in fact also greatly responsible for the "natural" reproduction of the recording. What's more, contrary to popular belief, they are crucial to the sound's overall sensation of power. Why, you ask? Well, put simply, the closer a microphone is to the source, the more it will capture the attack, the biting aspect of a sound, but on the other hand, the sound will seem "tiny." Likewise, the further away it is, the sound will have more time to develop. The result will not only be more "airy," because there will be more air between source and mic, but also "fatter" and more "powerful." The flip side is that you will lose some precision due to the lack of attack. 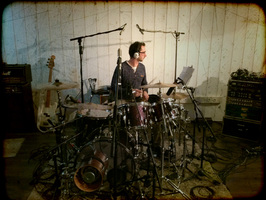 So, in short, to put this all together in the context of a close miking session with several microphones, the mics closer to the drums will take care of the sound's precision by basically capturing the attack, while the overheads will be in charge of giving it all the necessary power and stereo breadth. That's why the stereo overhead tracks are so important to me, because it is these tracks that will really make the overall sound of the drum kit work. To use a visual analogy, you could say that the overheads constitute the overall outline, while the close mics, which we will be discussing later on, deal with the details. Granted, the details are important, but they are worthless when put out of the outline, the context, whereas the outline can manage without the details.

There are several ways to record overheads. We we'll see the most common here. However, we had to strike a compromise during the recording sessions for this chapter, since neither I nor my associates had the time to do everything we wanted. So, I'll start with our own favorite, the ORTF stereo technique. 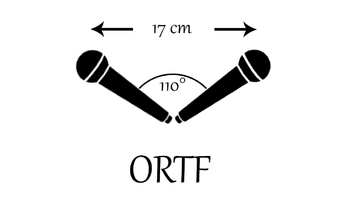 Conceived in the '60s by the French Office de radiodiffusion-télévision, or ORTF for short, this technique uses a couple of microphones with cardioid polar pattern. The capsules of the mics ought to be 17cm apart with the mics forming an angle of 110 degrees. The whole idea is to reproduce more or less the ears of an adult human being. But this is strictly the theory, of course, and you should obviously trust your ears when putting it into practice. The stereo image you get with this technique isn't the widest, but it is by far the most natural you can get. Furthermore, this technique has the additional advantage of being pretty mono compatible.

Regarding the placement of the mics in relation to the kit, I recommend you to place them behind the drummer, clearly above his or her head and tilted towards the upper rim of the first drums. Try to place the kick between the two capsules. You can vary the amount of room sound by playing with the height and the distance to the kit.

These are the results we got using this technique with a couple of Shure KSM 141 mics:

Do you hear how natural the take sounds? Also note that while the kick is well centered, the snare is slightly to the side. This is one of the issues when recording drums with this technique. Although it probably won't be too annoying for jazz or chanson, for instance, for more "modern" productions, where you need the kick and snare to be right at the center you should probably look into other options, like the ones we'll see in upcoming articles.

More on this next week!