To cut a long story short, my idea here is to praise the use of small amps when recording guitar in a home studio. But before pointing out the advantages, let's debunk the main argument usually used to counter the assertion above: the alleged impossibility to get a usable sound with such units. Rather than getting into a dialectic discussion, here are some examples that ought to convince that size is not the only thing that matters when it comes to guitar amps:

On this track, Dave Davies plays an Elpico AC55 "Little Green Amp." Granted, the sound is somewhat "particular," but but it works incredibly good, doesn't it?

Here, Clapton plays a Fender Champ which doesn't stop the intro riff from shocking your ears when listening to this epic smash.

On this video, Mr. Zappa uses a literally miniature amp made by Pignose. You might think it was just the artist pulling a stint during a gig, however Zappa used the same amp to record his Apostrophe(') and Over-Nite Sensation albums.

Jimmy Page is supposed to have also used small amps on the first Led Zeppelin albums, however, he has never confirmed it, so it's not completely clear…

All this examples are certainly old. So what about more modern sounds? Well, there's no need to look too far: I used a Vox AC4TV amp to record many of the audio clips for the chapter on recording electric guitar of this series.

In short, as you can see, it is clearly possible to get more than decent electric guitar sounds with a small amp. If you want a sound that has a rich low end, you obviously need something bigger or resort to other alternatives we'll see later on. That said, if you are not looking for deep lows, a small amp will do the job, which is great news for home studio owners, as you will see shortly…

Quiet is the new loud

In my opinion, when working in a home studio, small amps present two advantages compared to their bigger counterparts. First, you can really crank them up to get a good distortion without having to endure sound levels that are way too high. Trust me, your ears will be very grateful and it will also help you maintain a good relationship with the other members of your family and/or your neighbors. Besides, a restrained volume will result in less reverb from the room you record in, which is very good news, considering that the acoustics of the room are usually a home studio's main drawback. 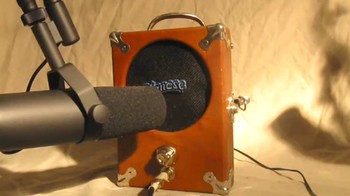 The second advantage of this sort of amp is their size and weight, which makes them very easy to transport. And what good is that, you ask? Well, again, the idea is to limit as much as possible the damages produced by the acoustics of the room where you record. For instance, it is very easy to lift a small amp to isolate reflections from the ground, which can be very detrimental to the sound, especially if you have a tiled floor or, even worse, no floor covering at all, like in a garage. This means you need to protect yourself as much as possible and a small amp makes that much easier than a full-sized guitar amp.

Along the same lines, there will always be a spot in any home studio, as bad as it is, where a guitar amp sounds better than anywhere else. And in order to find that "sweet spot" it's certainly easier to move a small amp than a huge stack with a 4x12 cab, even if the latter has casters.

That's it for today. See you next time for some new adventures in recording!