As I've already told you several times, I'm a real fan of the "less is more" philosophy and, consequently, try my best not to use too many tracks for a single instrument. However, when recording an electric guitar, sometimes a single mic in front of the amp isn't enough to capture the "real" sound of the guitar you so painstakingly took care of at the source. For instance, you might find that a given mic placed at a given spot will provide you the tone you are looking for, but the sound doesn't really have the dynamics you'd expect. Or that the highs are just perfect, but the overall sound lacks some fullness.

In such cases, your first reaction ought to be to look for another spot to place the mic or even change the mic. Never forget that even though when combining two (or more) sources recording the same instrument you are getting more "sonic information," you need to be specially careful due to any potential phase issues. If, despite all your efforts, you can't find the ideal placement/mic combination to get the sound you have in mind, you might want to consider adding a second mic to complement the first one. Do note that the most important word in that sentence is "complement." 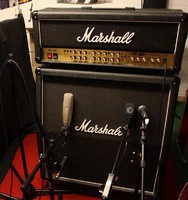 The method I'm about to suggest is actually quite simple. It goes like this:

Here are a couple of examples to really drive home the message. This is the signal of the first mic, an SM57 placed right in front of a Vox AC4TV amp:

The high end is pretty good, but I would like to add a more solid foundation to the overall sound. An AKG C414 condenser mic can provide such a "foundation" if placed correctly. This is what I got:

And once I mix both signals I got this:

The riff certainly gained some body without blurring the high end form the first mic that I liked so much. But there is something that still bothers me: the second mic highlighted some noises due to my playing on the second chord of the riff. It seems that I inadvertently strummed the E string which is supposed to be muted on this chord. It's hard to hear this with the SM57, but with the AKG it's pretty obvious and unpleasant. Fortunately, since this second track will be sub-mixed, it should be relatively easy to fix this blunder during mixdown, even though in an ideal world the best thing would be to record the whole take again. Not this time...

Another scenario, using the same SM57 take, would be to add some dynamics to this somewhat gloomy riff. Once again I used the C414, which is very accurate in this regard, and found a spot that suited my needs. Mixing the two mics I got a more "lively" sound, for lack of a better word:

As you can see we are not talking rocket science here. It's like playing with a sonic puzzle, like the one I described in the series dedicated to mixing, nothing more and nothing less.

See you next time to continue our adventures in recording guitar!