The recording by parts technique is very easy to understand: when you have an instrument whose sound changes drastically from one part to another, instead of recording everything in one go, you can record every section separately. Let me use an example to bring my point across better.

Imagine an electric guitar playing an arpeggio with a clean sound during the verses which transforms into overdriven power chords for the chorus. In a live situation, the guitarist would go from the verse to the chorus by simply stepping on a distortion pedal or changing channels on his/her amp, to then come back to the clean sound doing the same. Well, what I suggest here is to first record the clean parts on a track and then record the distortion parts on a separate track. 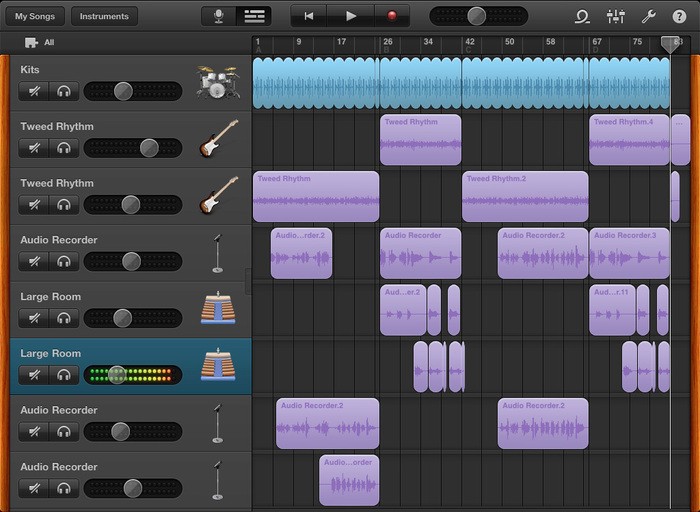 But what's the point, you ask? Well, first of all, this allows you to avoid any "timing" issues related to the need to engage any eventual effects at exactly the right moment to get the adequate sound for the part in question. If you consider the example above, the guitar player might engage or disengage the distortion a split second before or after he/she needs to. This can go completely unnoticed live, but when it comes to a recording, even the less sophisticated listeners will be able to tell something sounds awkward! If you record by parts this problem simply does not exist.

Another advantage, and it's not a minor detail, is that recording by parts will allow you to optimize the recording for each section. Indeed, not only will you be able to optimize the recording levels but you will also be able to work with your sound at the source much more adequately. If you were to take the example above involving the electric guitar, you could engage the bridge pickup and use a large-diaphragm condenser mic placed at about six inches from the amp to get a well-balanced, airy and crystal-clear sound for the verse arpeggios, whereas for the chorus you could switch to the neck pickup and use a dynamic mic almost flush with the amp to play with the proximity effect and get a fat distortion sound. Pretty interesting, isn't it?

Finally, there's another advantage you'll notice during mixdown. Remember that this technique is best used on instruments that go through a sudden and drastic changes during a song. At the composition level, this entails some urge for a break and contrast in the narrative of the song. If you optimize the tracking of each part you are effectively contributing to the achievement of this effect. And if you have each of the parts on a different track, you will be able to highlight even more this contrast by applying a different processing for each of them, be it with EQ, dynamic processing, reverb and/or delay, or maybe just with the volume and pan. Isn't that nice? 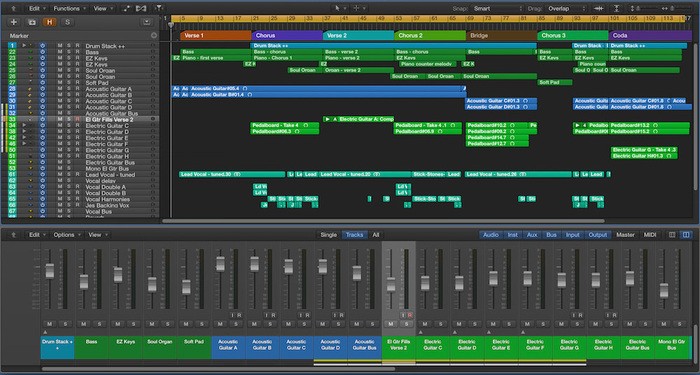 Nevertheless, this method might also result in some inconveniences. First of all, it might require additional work from the musician because, he/she is most probably not used to playing the two parts separately. This means he/she will need to get into a mindset that allows him/her to approach both sections with the energy that the song demands. A musician that's used to working in the studio shouldn't have a problem, but ti's important to have this in mind when working with less experienced musicians. Especially since, if you agree that the performance is what matters most, it makes little sense to try to improve the quality of the recording if it impacts negatively the performance, right? The song will definitely come out losing, which isn't the goal here.

Furthermore, recording by parts implies certain things which, depending on the story you want to tell, might not be necessarily desirable. To understand better what I mean, I invite you to read (or re-read) this article from our mixing series. Making an analogy to film, you could say that recording by parts would be like bringing a new character into the scene. And it's up to you if that's coherent with your "musical script."

Along the same lines, do bear in mind that recording everything in one go is more in line with what could be called a more realistic "live recording," whereas if you record by parts you'd be moving into the "produced track" corner. At the end of the day, it's all a matter of artistic direction.

To finish, also consider that this technique might also entail more work regarding the coherent blending of the different parts. But that's something we'll discuss next time!