A guide to mixing music - Part 3

The Prerequisites for a Relaxed Mixing Session

The first thing to consider before approaching any mix is your workplace. Since you will be working with audio the listening conditions are crucial. To be sure that they are optimal, I recommend you to read two articles previously published on Audiofanzine: The first one concerns the placement of the speakers, while the second one deals with the best ways to match the speakers and the room you'll be working in.

Further, I would strongly recommend you to get a comfortable, but silent, chair because it might become your best pal during those long mix sessions.

One song at a time 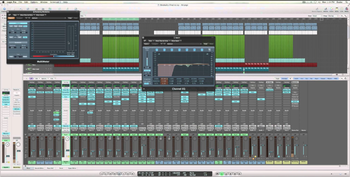 Now let's focus on the song you'll be working on. First of all, start by simply making a backup of your project before any mixing has taken place, at stage zero, so to speak. You never know how useful it might prove to be and you'd better be prepared. Once that's done, verify that all tracks are in sync with each other. Then, do renderings of the tracks that include virtual instruments, in order to save the maximum computer resources. If you use them, doing the same with virtual guitar and bass amps won't do any harm. You are not in the composing/pre-production stage anymore, so normally you shouldn't be fiddling with the dialings any longer. If you ever have the urgent need to go back, the magic of digital will allow you to jump back to the starting point, thanks to the backup you had the precaution to make, as we discussed earlier.

OK, the time has now come to get busy with several neccessary tasks related to the organization of your session: Editing, cleaning and comping your tracks, not to mention correcting eventual phase problems...In short, everything that your favorite website has already dealt with in different articles, which I invite you to reread:

I would also add to the list this article, which could save your day if you tend to be somewhat disorganized.

That will surely make a good read and give you a bunch of things to put into practice. Once you're done with all this, it's often wise to let a couple of days go by before you sit at the mixing console, so you can start with fresh ears and a rested mind. And now that we are at it, you can start practicing all this right away, because you'll have to wait until the next episode for more in this series...!