The traps of automation - Glitches and clicks

Apart from the issues related to routing, another very common problem seems to be the frequent appearance of glitches or clicks as a consequence of automation. This phenomenon arises mainly in two situations: The first one is when two automation events happen at the exact same time, which is visually represented with a vertical line in your automation curve. This means that the automated parameter goes from one value to the other in a discontinuous way. The more significant the value jump, the riskier it is for artifacts to happen. A textbook case is the automation of the volume fader going from 0dB to -∞ right at the middle of an audio file. This would equate to cutting off the waveform just like that, without a fade out and with the obvious result of a click.

There are two ways to solve this: try to space a bit the automation points so the transition between values is more progressive. Or make the abrupt changes when the track in question is completely silent. 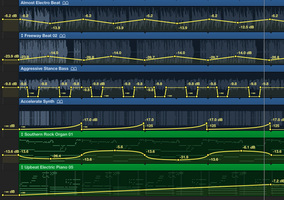 The second situation is linked to the first one in a way and has to do with the automation of settings that only toggle between two states, like the mute button of a track or the bypass of a plug-in. As explained above, the change between values is quite radical, which can result in some sort of artifact. But in this case you can't simply create a fade out, given the toggle nature of such parameters. The good news is that if your DAW and plug-ins are well-conceived, you shouldn't have any issues. The bad news is that if that's not the case there isn't much you can do about it. The best thing you can do is look for an alternative solution to get the desired result. For instance, you could make a quick fade in rather than using the Mute button, or if the plug-in features a dry/wet parameter automate it instead of using the bypass switch. And if there is absolutely no other option, you could always go more radical and render the track in question with the automation and then manually do away with the click using the tools available in your DAW (scissors, trim, fade, etc.).

And to finish this article, one last remark. Don't forget that the whole idea of automating something is that later on you won't need to have your hands on it. This doesn't mean you can't modify it afterwards, but that might prove to be a bit more complicated than directly altering the parameter with the mouse, for example, the Trim automation mode or even deactivating the automation reading. If you were asking yourself why hadn't I dealt with automation earlier, now you know!

Next time I'll give you some last recommendations regarding automation.