The traps of automation - Part 1

When it comes to automation, most inconveniences are related to routing within your DAW. I'll take a specific example to illustrate my point. Let's suppose that you want to emphasize the passing from a verse to the chorus by, among other things, increasing the volume of the kick drum. To achieve that, you logically attack the volume fader of the appropriate track to automate the level variations. And bummer! It isn't exactly what you expected? What went wrong? This classic problem arises when you are sending the kick to a dedicated group bus for the drums where, as is very common, you have inserted a compressor to control the overall dynamics of your kit. The end result being that even though the compressor will have to work a little harder, it will still manage to keep the drums signal under a tight control, which makes your automation worthless. This very counterproductive strategy is not good. To get the right result, in addition to the kick's volume fader, you can automate the settings of the compressor on the group bus so the compression doesn't work against the automation of the kick. Another option would to insert an EQ on the drums group after the compressor, and automate a peak filter in the lows and even a second one on the mids for the attack, in order to get a satisfying result on the chorus. 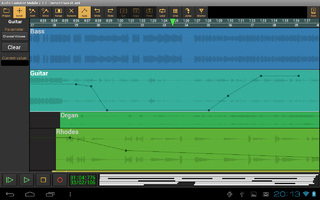 Another pretty common issue when automating volumes is managing the balance with the auxiliary buses. If you send something to a bus pre-fader, adjusting the volume of the source track will invariably affect the balance between the dry and wet signals. On the contrary, if the signal is sent post-fader, the balance will remain the same, which isn't necessarily what you want. To be more precise, if you send a signal to a reverb bus whose goal is to place the instrument in the sound field, bear in mind whether it's pre- or post-fader when automating the volume of that instrument, because it might end up undermining all your efforts.

I hope today's article managed to draw your attention to the undesired effects that the routing you choose might have on your automation goals. Before carrying out any changes, think about the possible repercussions it might have on the next steps in the signal chain up to the master bus, including all effects placed in parallel loops. I know it sounds a bit crazy, but trust me, once you get your head around it you'll see, in the end, it is only a matter of perspicacity and organization.

See you next week for the second part of this chapter dedicated to avoiding the pitfalls of automation.