Everything about Phase Problems - Part 1

Most times, beginners suffer from these phase "problems" without being aware of it. They just know something is wrong with the sound, but don't really know what it is or where the problem is coming from, and they grope for what almost always ends up being a dubious solution. Yet, you don't have to be a rocket scientist to understand phase and it might even become a precious ally if you dig a bit deeper into it. So, with that in mind, in this first part, we will address the issue in a simple manner to better understand the theory behind that nasty phase!

To simplify our task, let us consider one of the simplest sounds there is, a sine wave, which is made out of regularly alternating "peaks" and "valleys" (in this case at a frequency of 440Hz).In the beginning there was sound. As you know, sound is basically vibrations propagating through the air in the form of pressure variations. When you capture a sound with a microphone, the former is transformed by the latter into an electrical signal that can be represented with a waveform.

If you add to that first signal an identical sine wave, perfectly lining up the "peaks" and "valleys" (which means without any delay between them), you get a waveform oscillating at the same frequency, but with a 6dB increase in amplitude. It is said that these two signals are in phase.

Conversely, if you align the "peaks" of one with the "valleys" of the other, the signals will cancel each other out and you will get absolute silence. It is said that the signals are out of phase. 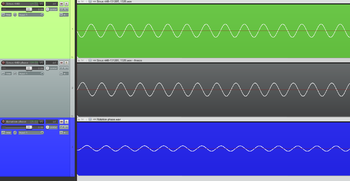 Without going to such extremes, any delay between two signals will result in a more or less intense level change at the output. This delay is called phase difference or phase shift and is expressed in degrees. A phase difference of 180° corresponds to an out-of-phase phenomenon, while a difference of 360° makes the waves line up perfectly again, but with a phase shift of one full cycle. 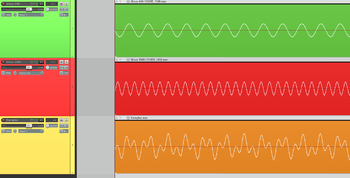 All that theory is very nice, but in real life you will hardly ever find yourself working with a pure sine wave. However, regardless of the complexity of the waveform, it will always be the combination of simpler waveforms at different frequencies. Thus, in the example opposite, the third waveform is the sum of the two others. While it is easy to understand what happens to a signal when we superimpose an identical in-phase or out-of-phase signal (an amplitude increase of 6dB or absolute silence, respectively, for those who aren't paying attention!), what happens when you apply a small delay that results in a phase shift of just a couple of degrees between both waveforms? 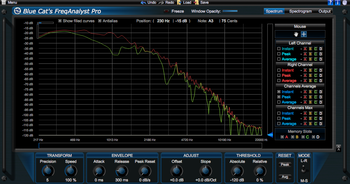 What you get is a phenomenon known as comb filtering, which is basically the reinforcement and cancellation of different frequency zones, as you can see in a spectrum analyzer. The red curve here represents the two signals in phase, while the green one shows the result of the delay in the previous image. This phenomenon can be easily explained taking apart a complex signal into simpler waveforms. It is thus easy to understand that delay leads to phase problems with certain waveforms, but not with others, and that's where the comb filter in the spectrum analyzer comes from. After reading this article, it seems obvious that phase issues can easily ruin your work. In an upcoming article we will dig further into this matter to turn this problem into an opportunity.