What format to use?

I won't linger too long on this subject because I think it's less important than what comes next. What you should know is that the "sample rate" represents the number of samples that the converter measures per second. You have all probably heard of 16-bit/44.1 kHz, if only due to the fact that it's what's usually called "CD quality." Recording at 44.1 kHz means that the audio signal is measured 44,100 times per second. And what exactly does the converter measure? The audio volume, but we'll come back to this later.

Modern digital interfaces are capable of working with sample rates of 44.1 kHz, 48 kHz, 88.2 kHz, 96 kHz, and even 192 kHz and more. In theory, the higher the frequency, the better the audio quality since the higher the number of samples the higher the precision, right? Well, yes, but you also need to consider that working with a higher sample rate means you'll end up with bigger files and you will need higher processing requirements. So, the question is: Is it really worth it? If you ask me, it isn't, considering that the difference in terms of quality isn't that significant. In fact, 44.1 kHz is in theory more than enough to reproduce audio frequencies up to 22.05 kHz, which is beyond what the average human being can hear (around 20 kHz) – in other words, this sampling rate is more than enough. Personally, I work at 48 kHz, but not because it makes me feel better about it, but rather for pragmatic reasons: 48 kHz is the standard when it comes to sound for video and the extra cost in relation to 44.1 isn't too high.

Let's move on now to the bit depth.

As I said before, the sample rate determines the number of samples per second of the audio volume. For its part, the bit depth is the measured volume itself. To be more precise, a bit allows you to capture (and transcribe) a dynamic range of 6 dB. Thus a 16 bit recording provides a dynamic range of 16 x 6 = 96 dB. That may seem more than enough for almost any modern production, considering that most of them display dynamic differences that hardly exceed 18 dB between the softest and the loudest sound. So why should you work with a higher bit depth? Well, there are at least three good reasons for that… 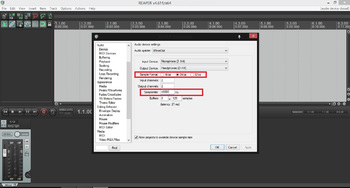 First, you shouldn't confuse the dynamics of a finished song with that of an instrument being recorded. And even if this dynamic range will certainly be reduced during the mixing and mastering phases, it is crucial to get the most faithful transcription possible of the source in order to preserve enough room for action during later stages.

The second reason has to do with an inherent limitation of the gear used to record. Every analog device (a mic, preamp, etc.) inevitably generates noise. And the noise from all the different elements is summed, which results in an overall higher noise floor. Not to mention the background noise of the place you are recording in. Imagine, for instance, that all this noise together amounts to 20 dB. In order not to get drowned in this racket, whatever you record ought to be above 20 dB, which basically means that the dynamic range of your 16-bit recordings decreases from 96 dB to 76 dB. But that's still quite a lot you'll say. Right, except that you are not considering yet another limitation of digital recordings...

In digital audio, 0 dB is an absolute limit. Beyond that you'll inevitably get clipping, in other words a very nasty noise that is anything but musical. This means you need to record well below 0 dB to be on the safe side. This, once again, reduces the dynamic range available and makes 16 bits start to feel somewhat limited. Fortunately, there's an easy solution: 24 bits!

At 24 bits, the dynamic range is 24 x 6 = 144 dB! Even with a noise floor of 20 dB and a hypothetical safety headroom of 15 dB before the digital clipping happens, you would still have 109 dB for the audio signal, which ought to be more than enough. Consequently, all recordings for this series will be made at 24 bits.

Before I finish, a quick remark regarding 32- and 64-bit floating point processing: These bit depth resolutions can be very useful during mixdown and mastering, but not so much during the recording stage. Why, you ask? Well, because, as far as I know, there are currently no converters that can actually record sound at such bit depths.

And that's it, see you next time!