Working at the source

Would you come to the idea of recording Smells Like Teen Spirit with a ukulele expecting to achieve the same spectacular tube sound of Nirvana? Would it be wise to choose a baritone to play the part of the Queen of the Night in a faithful reinterpretation of Mozart's famous singspiel The Magic Flute? Obviously not. It would be just as absurd as trying to play a Jimi Hendrix riff with a drum or trying to make a cat bark. 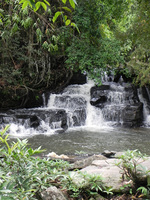 Behind these silly sounding examples lies an important fact often neglected by most home studio owners just starting out: you should try to make your instruments sound as close as possible to what you have in mind before you even start recording. You might have the best gear in the world and honed your mixing skills to perfection, but that won't be of much use unless you have put the same amount of effort at the source!

That's why I strongly recommend you to take all the time you need to search for "the sound" that you have in your head before you press the Record button. Pick the right guitar, test different effects combinations, choose the most adequate cymbal, etc. To cut a long story short, start off on the right foot. That's the best way to make sure that you'll arrive safe and sound at the destination you've chosen.

As a logical consequence you will also need to choose the right microphones and their placement. Again, take all the time you need to find that magic combination that will faithfully capture the sound of the source you have been painstakingly giving form to. In the end, it will only save you time in future stages. And don't be afraid to make radical decisions. If that's what it takes, then so be it. Trust me, you won't regret it during mixdown.

To err is human

What if you mess up your choices? Well, first of all you should start by playing it down a bit. It's not like it's an open heart surgery what you are doing here, so nobody is gonna die due to your mistakes, okay? On the other hand, only those who never try anything never make mistakes. In my opinion, mistakes are as encouraging as the lessons you learn from them. So take your best shot and make as many mistakes as you must, that's the only way to learn and do things better the next time around! Besides, the main advantage of a home studio compared to big recording studios is that you won't have any pressure regarding the time and money it takes you to get it right. Hence, if you ever feel lost, take note and go back to the source.

And yes, in case you are wondering, I have made some awfully nice mistakes throughout my career. See you next week!