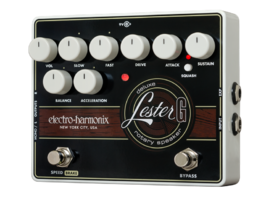 Like many of Electro-Harmonix’s pedals, Lester G ($224) is on the large side. Solidly built in a metal casing, it's 5.5" wide — approximately the width of two standard sized stompboxes — and 4.5" deep.

Lester G's Leslie emulation is achieved via digital circuitry. The pedal does include a buffered bypass, and its I/O consists of a mono input, stereo outputs (with a mono option) and an expression pedal input, which allows you to plug-in a standard expression pedal (not included) to control the rotation speed of the virtual Leslie. A 9V adapter is included. The pedal doesn't run on batteries.

The controls are dominated by eight large white knobs, with a cluster of four of them governing the Leslie functions. These include a Fast and Slow knob, which control the Fast and Slow rotation-speed modes, respectively.

At the same time Lester G came out, EHX also released Lester K ($178),  which is aimed more at keyboardists. The Leslie emulation and controls are the same, but it doesn’t have the compressor circuitry, which is likely why it's considerably smaller. It does have one feature the larger pedal doesn't: stereo inputs, which are quite useful if you're a keyboardist. 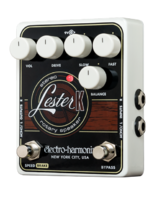 But despite the "K" in its name, it's not only a pedal for keyboardists. A guitarist could certainly use it, too. If you wanted to compress the signal, you could put your own compressor pedal after it in the signal chain.

Tapping on the Speed/Break footswitch toggles between modes, and the Acceleration knob sets the transition speed between the two modes after you tap the footswitch. You get a visual depiction of the rotation speed from an LED status light flashes in time with it.

Pressing and holding the footswitch puts you into Break mode, which decelerates the virtual Leslie’s rotation to a complete stop. Again, the duration of the slowdown is set by the Acceleration knob. After it reaches the stopping point, the LED glows one color. Although the Brake feature adds authenticity, I didn’t find it to be particularly useful when playing.

If you plug an expression pedal (not included) into the Exp Pedal input, it overrides the Acceleration knob, allowing you to control the rotation speed with the pedal. How fast or slow you can get depends on which mode you’re in and how you’ve set the respective speed knob. Pushing the pedal all the way down gets to you to your maximum setting, and pushing it fully up slows it down to its slowest possible setting for that mode, regardless of the knob position.

The overall output level of the pedal is controlled by the Vol knob. Some tonal control is possible with the Balance knob, which adjusts the balance between the simulated Leslie’s rotor and horn — the latter being much brighter than the former.

To give you a sense for the tonal range available, here's an audio example with the same bassic passage repeated three times: First with the Balance at its default, center position; next with it all the way to the rotor side, and finally all the way to the horn side:

The Drive circuit is controlled by a single knob. Starting at around half way up the effect starts to be noticeable. Cranked up full, it provides a smooth and hefty overdrive. It has no toggle switch to activate it, but when the knob is fully counterclockwise the Drive is off.

Likewise, the compressor is engaged by turning up the Sustain knob. You also get a knob to control Attack. For even more compression, engaging the Squash button kicks in a higher ratio. Having the compressor onboard increases Lester G's sonic flexibility, allowing to you squash down the sound, add sustain and reduce dynamic range,

It’s nice that Electro-Harmonix includes a paper manual (mostly a thing of the past these days), which is handy when you’re not around your computer to access the PDF version. Sure, you could download the PDF on your smartphone, but it would be pretty hard to read. Much as I appreciate the paper manual's inclusion, it's production quality leaves a lot to be desired. For one thing, it appears to have been printed on a copy machine. But worse, it's borderline illegible in spots, thanks to the big gray, extremely busy Electro-Harmonix logo that’s printed in the middle of each page, obscuring large chunks of text.

One thing I noticed right away is that no matter where the settings are, Lester G adds a warm and fat smoothness to your sound. The Leslie emulation itself sounds quite authentic. You can get fast and slow effects, from subtle to heavy-handed. I was able to achieve excellent clean, organ type sounds on my guitar.

Here's an example with a fast rotation speed (like all the examples in this review, it was recorded with Lester G plugged straight into a miked Fender Twin Reverb and played on a Telecaster.):

Here's an example with a slow rotation speed:

By pressing the pedal continuously (rather than tapping it, which you do to change speeds), you apply the Brake function, which stops the virtual Leslie from rotating. Here's what that sounds like:

Here's an example with the Drive knob turned to about 2 o'clock:

Here the Drive is full up:

This example features Drive and Compression with the Squash button in, combined with a fast Leslie setting:

With the Brake function on, the Leslie isn't "spinning" and you get more of a standard speaker cabinet sound. With the Drive and Compression on you can get fairly close to a standard distorted guitar sound. That said, you can't completely turn off the Leslie circuit to access those effects separately. Although there’s no rotary action in Brake mode, it still impacts the tone, sounding phasey and thick. Too bad, because that would turn Lester G into a multi-effects pedal if all three effects could be accessed separately.

Here's an example recorded with the Brake activated, and Drive and Compression turned on:

Although it’s a tad expensive and a little on the large side, Lester G offers an authentic and adjustable Leslie emulation in pedal form. It sounds really good, is easy to use, and has a nice feature set. The onboard compression and Drive circuits add to its sonic versatility.

I don’t have any major issues with this pedal, and the ones that I do have, like the partly illegible manual, are not that consequential. Overall, Lester G is an excellent way to bring the sound of a Leslie cabinet to your pedalboard.