Writing a Biography for an Artist or a Band

How to Write a Biography

For file format limitations in the context of a Press Kit, please refer to this article. Here we will deal with the content of the bio itself.

Avoid megalomania: your bio ought to be succinct and does not need to cover your whole life. Instead, mention what led you to your current musical project, detailing the human side of the project itself. Here are some general guidelines on what it should include:

• The geographical origin of the artist or band (region, state or city, with relevant information if the place is not well known: "Originally from the Chicago area" is much better than "Originally from Morris" ...)

• The music style of the artist or band. Is it rock, pop, metal or electronic music? Instrumental or with vocals? In what language? Again, do not be too abstruse: not everybody knows what the school of Canterbury or Black death grindcore is...

• The name of the artist or the members of the band, including their respective roles: who plays what? Who is the composer? Who writes the lyrics? Who is the leader?

• How long has the project or current lineup (if relevant) been around: it's important to distinguish an artist who's making his first album debut from an artist that has a 25-year-long career and is publishing his 12th album.

• Highlights that have marked the artist's career, if pertinent. For example, an important concert, the incorporation of a new member, the production of an album.

• A references section, if you have some press quotes about the artist or band: there's no need to be exhaustive, but if your project has already been the subject of an article, put an excerpt indicating the author, date, and where it was published. For example: "One of the most powerful performances we have seen in recent times." - John Doe, Whatever Magazine, September 2010.

Remember not to exaggerate and include only a few quotes from the most popular media, or alternatively, the most enthusiastic ones.

Depending on how much material you have available, focus more or less on particular passages. The goal is to produce a document that fits on a single page and can be read without the use of a microscope (font size 11 or 12).

If for any reason you are tempted to write a longer version, don't hesitate to write a more detailed bio that you can always provide additionally on demand or as download on your website. But never force journalists to read a whole novel of your life and your work without being completely sure that you are not going to deter people from learning more about you and what you do.

And, most importantly, have your bio written by someone who knows how to write properly. Apart from making sure that it does not contain any grammar or spelling mistakes, he/she should also make the text flow so it is easy to read and does not seem like it was written by an amateur.

Here you have an example of how it should look like:

The History of Tic Tac 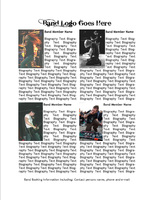 Tic Tac revolves around composer, bassist and singer Marc Dupont (ex Mademoiselle Yop) and guitarist, lyricist and singer Nathalie Legrand — two artists that discovered their music affinity by frequenting the rock scene in Orleans (France) in the early 2000's. On stage they are supported by Victor Henry (ex Mokull) on drums and Fabien Merthet (guitar), who, ever since his first album (Flowers for Algernon - 2008), has never hidden his ambition nor his influences.

Inspired by US Indie bands, especially Pavement and The Pixies, Tic Tac intends to shake the French rock scene combining subtle pop with electronic noise, and seasoning it all with intelligent lyrics for the less offbeat. Acclaimed at the "Printemps de Bourges" in 2009, Tic Tac has become even more effective on "Silent," the band's second album released in 2011, and whose single 'Repentant' has already won the "French Song 2012" contest organized by the Region of Ile-de-France. The pinnacle of their career? By no means — it's only the beginning.

What the press says:
"All guitars and vocals, Tic Tac was the true revelation of the contest." – Scott Bley, The Blue Whale
"Amazing! And invigorating!" – Amy Mollard, Music Kingdom
"A band to follow closely" – Excaliber, www.crock.com