After purchasing VMR, and downloading and installing it, you register it on the Slate website and are given an activation code, which you use to activate your iLok license via the iLok License Manager software. If you don't have an iLok2, you can buy one bundled with VMR for an additional $20 over the regular price of the software.

The 3D graphics in VMR are excellent and quite realistic. A couple of the modules even appear to have some of their paint worn off from use. Nice touch. 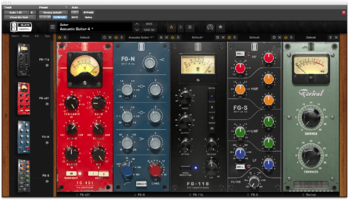 When you open up a default instance of VMR (which can be mono or stereo depending on the configuration of the DAW channel) you get a rack with three empty slots. Until you fill a slot with a module, it sports a faux “cover plate,” which the manual cheekily says is designed to prevent virtual dust from getting into the rack.

Graphic depictions of the available modules inhabit the far lefthand side of the rack, and can be dragged into the rack slots in any order you want. Once you’ve populated the first three spaces, each subsequent module you drag in creates a new space, until you reach the maximum of eight.

VMR comes with five modules (including the free Revival module), so there’s room for expansion, and Slate will be offering additional ones for purchase. Another free module, Trimmer, was in beta at the time of this review, and I’ll cover it briefly later in this review.

Each module has its own preset menu, and most of the presets offer useful starting points. You can also select from a menu of global presets, which utilize multiple modules.

Within the rack, modules can be reordered by dragging and dropping. Above each rack space is a set of controls including on/off, Solo, the preset menu, a tab labeled F that gives you automation information, and a button (X) that deletes the entire module.

Now, let’s turn our attention to the modules themselves, starting with the two EQs. FG-N is an EQ that’s based on what you’d find on a Neve console channel. For the high end it features a High-Shelf filter with a single control. Beneath that are three are semi-parametric bands: EQ1, EQ2, and Low Shelf. There's also a High Pass filter.

This EQ is not particularly subtle: small boosts or cuts cause noticeable changes. The sound is excellent, though, and, as with all the VMR modules, you’d swear from the sound and feel that you are adjusting a console, not a plug-in — the modeling is that good.

This example starts with an unprocessed guitar and then adds EQ (FG-N and FG-S) and compression (FG-116) when it repeats: 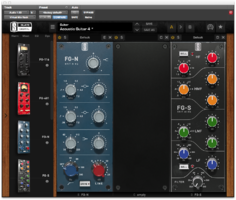 Additional controls include a Line/Drive knob and Drive switch. When the Drive is off, it’s an Input Gain control. When Drive is engaged, the input gain is compensated. Thus you can drive the signal harder without making it louder. The Drive control's effect is not as dramatic as you might expect. In fact, it's pretty subtle in many situations.

The other EQ module, FG-S, appears to be modeled from an SSL console EQ. It’s equipped with a semi-parametric High Filter band, which can be switched from a shelving filter to a bell filter with the push of a button. Below that are two fully parametric bands: High-Medium Filter and Low-Medium Filter. Then there’s the Low Filter section, which like the High Filter offers frequency adjust and boost/cut knobs plus a button to switch it to a bell filter. A High Pass filter rounds out the controls.

This module also sounds excellent, and lets dial in more narrow settings than the FG-N, thanks to the Q controls on the two parametric bands, and the separate frequency and boost/cut controls for the High and Low Filters. For really surgical EQing, I might choose something other than the EQs in VMR, but for almost all EQ tasks, they offer more than enough adjustability.

The red-faced compressor is called the FG-401, and it emulates a VCA compressor. It features Threshold, Ratio, Attack and Release controls, as well as a Makeup gain knob. You have a choice of two different compressor circuits, which are selectable with buttons at the bottom right of the module. The compression in Circuit 1 is a bit more pronounced than Circuit 2, which provides a more transparent sound.

You can also switch in the Transformer circuit, which changes the coloration, producing a more harmonically rich and present sound.

A Mix control makes this compressor even more useful. It defaults to 100% compression, but you can lower that in relation to the dry signal, making it possible to do parallel compression. For example, for a stereo drum track, I dialed in extreme compression settings but then lowered the Mix control until I found the sweet spot.

Here's a drum pattern, with no processing the first time through and then parallel compression from the FG-401, and EQ from the FG-N when it repeats: 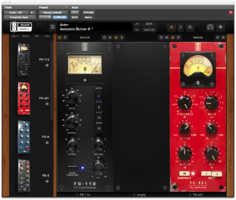 The second compressor module FG-116, is a model of a Urei 1176. It offers the standard 1176 knob collection (albeit in a vertical orientation), including Input, Output, Attack and Release controls, and four Ratio buttons. Like the FG-401, it has a Mix control, and it’s also equipped with a switchable Noise Reduction circuit.

The compressor sounds excellent, and offers everything from a subtle squeeze to heavy pumping. Like the hardware 1176, it has no threshold, and the amount of compression is governed by a combination of how hard you hit the input and what the ratio buttons are set to.

Both VMR compressors are quite useful, and having both gives you more sonic choices.

One missing element in VMR’s dynamics processors is a noise gate. Especially for those mixing live drums or buzzy electric guitars, a gate would be a nice addition. In the meantime, you can simply insert a third-party gate plug-in after VMR in your DAW's insert chain. That said, it would be more convenient to have one built into VMR. Since Slate will be selling add-on VMR modules, I have a feeling a gate of some sort will be available sooner or later.

The Revival module, which is an exciter of sorts, comes free with VMR. Even if you downloaded the VMR demo and decided not to pay for it after the trial period, you could still use the rack and the Revival module. Its interface is very simple, consisting of two control knobs: Thickness and Shimmer.

The former enhances the bottom end of a track and the latter the top end. It’s as simple as that, and it works quite well, especially when used judiciously. I found the Thickness band to be useful on all sorts of tracks, from kicks to snares to guitars to vocals. The Shimmer band is best for adding a little air on top, and is more sublet than the Thickness band.

Here’s an example of Revival’s Thickness effect on a kick drum. The first two measures it’s bypassed and then you’ll hear it when it’s engaged:

As mentioned earlier, the Trimmer module is now in beta, and will soon be available for free. It's simple, but very useful. It has a large knob that’s at unity gain when set to 12:00, and can cut or boost the signal by 24 dB. Since not all the modules have output controls, it can be handy to have Trimmer around. It also features a phase reversal switch. 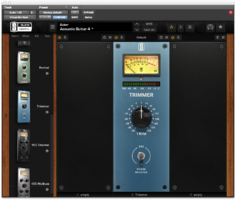 Considering that VMR is a channel strip, it’s important that it be CPU efficient. To see how much CPU it uses, I created a 40-track session in Pro Tools on my Quad Core Mac Pro, and opened a 4-module instance of VMR on each track. When the transport was in play, my total CPU load was at about 36%. On an Intel Core i5 MacBook Pro, the same test pushed the total CPU to 66%.

Overall, VMR seems reasonably efficient considering its power, and unless you have a really slow computer or a really large session, you should be able to put it on every track.

Not only is VMR ($199) a high-quality, analog-modeled plug-in featuring multiple modules, it also represents a great value for the money. It gives you flexible analog-style console processing, ease of use, and expandability, for a more-than-reasonable price. The sound quality is superb, and the feature set is well thought out. Slate Digital is known for making great sounding software emulations of analog processors, and VMR is only going to enhance that reputation.