A Look into the Vision

January 2013 marked the start of a collaboration between UA and celebrated manufacturer API with the announcement, during the Winter NAMM, of the imminent arrival of the API 500 Series EQ Plug-in Collection. The outcome seems to have pleased both partners, because last October they unveiled the modeled version of a channel strip taken from the API Vision mixing console. Let's see and, especially, hear what that's all about… 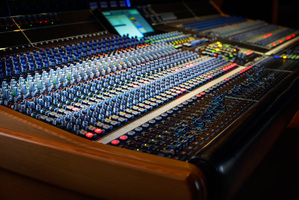 Launched in 2003, the Vision mixing console was conceived by API (Automated Processes Inc.) with the intention of offering a flexible work tool for surround that respected the sound character responsible for the brand's success. From the several configurations available, UA chose to model the following modules: the 212L preamp, the 215L hi-cut and lo-cut filter section, the 235L gate/expander, the 225L compressor/limiter, and the 550L four-band EQ.

The 212L mic preamp is inspired on vintage API 2488 consoles, which feature API 2520 op-amps and transformers. The sound delivered is described as being very detailed in the high end of the spectrum, without sacrificing the powerful and generous lows that made the brand renowned in the '70s.

The 215L passive filter module is conceived to delicately clean the signal, in order to keep it as natural as possible. The low-pass has a very soft slope (6dB per octave) and a continuous range from 40.8kHz to 643Hz. For its part, the high-pass has a 12dB-per-octave slope and goes from 12Hz to 596Hz.

The 235L gate/expander has a 25- or 100-millisecond attack time, which is meant to be fast enough to choke unwanted noises without actually grasping at the signal. Continuously variable threshold, depth and release time controls are also available, as well as a switch that toggles the release to "Hold" mode, which affects the time the gate is open. The expander mode offers a "downward" expansion with a fixed 1:2 ratio and a gain reduction determined by the depth control. 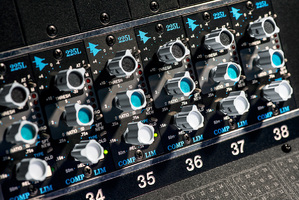 Seemingly inspired by the magnificent API 2500 compressor, the 225L module features continuously variable ratio (1:1 to ∞:1), threshold (+10dB to -20dB) and release (50 milliseconds to 3 seconds) controls. You can choose the attack time with a three-way switch (2, 18 or 75 milliseconds). Further, it can operate with hard- or soft-knee characteristics, which are very typical options. Not so typical is the possibility to change the compressor's detection circuit type. The "Old" mode offers a typical "feed-back"-like gain reduction, while the "New" mode works with a "feed-forward" design. In plain English, in the first case, the detection signal is taken after the processing, while in the second case it is taken before the processing.

To close this brief overview we have the 550L equalizer. Taking after the brand's 550B, it operates with peak filters divided into four bands (low, low-mid, high-mid, and high frequencies), each with seven fixed frequency settings and +/-12dB of gain. The HF and the LF bands can be switched to shelving filters. This module uses API's characteristic Proportional Q factor, which narrows the bandwidth depending on the gain. The "PREDYN" switch allows you to place the EQ before dynamics processing. 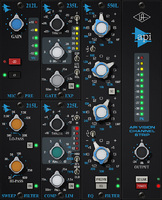 The Universal Audio virtual version recreates, more or less, the functions of the hardware modules, meticulously reproducing their look and design. Extremely well thought-out, the superb GUI is a proof that skeuomorphism is possible without sacrificing on the effectiveness of the design. A word to the wise.

First of all, we have the preamp with adjustable gain (up to 65dB), -20dB pad, polarity invert switch, and virtual LED VU-meter indicating the output level of the preamp. Unlike the other modules, this one cannot be disabled, unfortunately. It's a real pity, given the quality of each module, which would've been interesting to be able to use without the coloration of the 212L and, especially, without the additional resource consumption.

Speaking of coloration, what we're dealing with here is not very discrete, but, oh, so effective! The sound gains "punch" but has a moderate transparency tending towards translucency. But don't panic, the source signal is far from being deformed. However, if you want the signal to remain entirely unaltered, look somewhere else. In use, there's only one thing that made us raise an eyebrow: The very small margin between an openly colored and a completely distorted signal. We would've liked to be able to explore a bit more between these two options, given the very pleasant coloration. But we will come to that later, when we listen to the examples…

Let's move on now to the gate/expander. Incredibly faithful to the original, the 235L is the module that impressed us most. As you will see in the following section, its musicality and ease of use will surely render reliable results.

The compressor/limiter is also at the top of the list. Despite our fears, the absence of a continuously variable attack control is not a hindrance. The hard/soft knee modes and the feedback/feedforward type options have a lot to do with that. Having had the chance to work with a hardware API 2500, we can confidently report that we've had very similar sensations with the virtual 225L. The only negative aspect is the non-switchable auto-gain, which makes up for the gain reduction automatically. This behavior is faithful to the original, but we would've like to have the option to disable it.

And, what can we say about the 550L EQ, except that Universal Audio has pulled it off nicely. But that's no surprise, considering its previous attempt with the API 500 Series EQ Plug-In Collection. The sound is clear and punchy. In short, it's musical with the API touch. Furthermore, this module also features a switch to place it on the dynamics processing sidechain. The amount of flexibility is impressive.

To finish, this API Vision channel strip has a LED peak meter at the end of the chain, as well as a gain knob ranging from -24dB to +12dB, to control the output level. This section also features an "SC Link" button to link the sidechain circuit's right and left channels of the 225L and 235L modules, in order to avoid any imbalance when using stereo signals. Finally, the "Power" button allows you to disable the plug-in.

Before starting with the audio samples, a brief word regarding the technical aspects of the product. It's a plug-in for UAD -2 cards available for Mac (OS X 10.6.8 and higher) and PC (Windows 7 64-bit) in VST, RTAS and AU formats. An AAX 64-bit beta version is also available, but only for Mac at the time of writing this review. Regarding DSP consumption, we won't beat around the bush: It is really resource-intensive! One single mono instance uses 22.4% of the card's DSP at 44.1 kHz, and it rises to 29.7% in stereo. You can reduce the consumption by disabling certain modules, but you will need a really beefy setup to mix a project with an API Vision per track. Especially if you plan to use more UAD plug-ins.

After reading all these beautiful words about the API Vision, it's about time we listen to the beast. Let's start with a virtual electric piano.

The unprocessed sound was a bit dull, so to put things straight we raised the input gain of the plug-in to warm things up (the LED VU-meter flickers at +8). We added a hi-pass just above 100Hz to clean up the signal a bit, a pretty tight compression in HOLD mode, but with a medium attack time to get some bite, an EQ with a very slight dip in the low mids and +10dB in the highs to give it some air. And the resulting sound was much more convincing! For the third example we used the exact same settings, but with a bit more gain, which makes the signal distort. To make it more clear, the fourth example is identical but with no reverb. It's not unpleasant, but hardly useful, and it's just a hair's difference in the gain setting. That said, if we apply this distortion not to the original signal but rather to a delayed one, it becomes really interesting, as you can hear in the sixth example.

Let's try it now with a synth bass line.

Very aggressive originally, this riff gained even more "attitude" with the input gain cranked all the way up, the hi-pass set at 10kHz, pretty extreme EQ settings in the low and high mids, and some compression. The result remained always musical, despite a very severe processing.

For the next example we used only the gate/expander section on the choir, where you can hear a very obvious breathing problem.

We were able to remove the breathing noises quickly and easily. The processing is amazingly transparent and effective. Hats off UA!

This gate module is capable of acting in a much more drastic way, as you'll see in a moment with drum overheads. 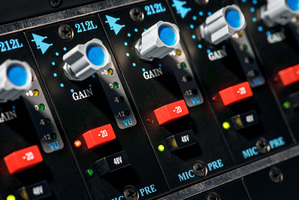 The bleed from the bass drum was very present. A lo-cut and a gate got rid of most of the problems. However, while the snare opened the gate systematically, the hi-hats didn't make it through, despite our efforts in example 12. But, fortunately, we recovered the hi-hats by placing the EQ on the sidechain. We only needed to adjust the depth of the gate and we ended up with a very usable result.

On the snare, it was easy to get rid of the bass drum bleed with the gate and hi-pass filter.

And, finally, here is the entire kit together. We added a plug-in instance on the bus to heavily compress the whole kit (except for the low end, due to the lo-cut on the sidechain) and a bit of EQ. The final result was a drum kit with much more character!

The time has come to draw a balance. So, is it faithful to the hardware version or not? To be honest, we don't know, since we have never had the chance to put our hands on an API Vision console. And, after all, is that what really matters? Isn't it more important that it sounds and works fine? After this review, we can assert that, despite the minor defects, we could easily mix an entire song using only this virtual channel strip. If only we had enough DSP power. And while that might reassure some, you ought to know that, in our experience with the "API sound," using the 500 series modules and the 2500 compressor, the kinship is obvious. As usual, we cannot encourage you enough to try out the demo version to make up your own opinion. But be warned, there are many chances that after the trial period of 14 days you'll end up like Droopy with a sign reading: "You know what? I'm (H)API"!