Why Not Add Eight?

Your ins and your outs 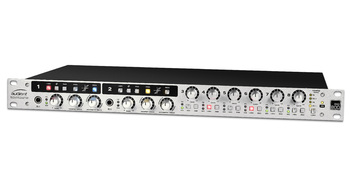 The 1U rackmount ASP800 is designed with all of its mic/line combo jacks on the back panel, and all of its channel-specific controls on the front. The only front-panel jacks are 1/4" DI inputs for channels 1 and 2. Having all the mic pres on the back makes it possible to have a lot of front panel knobs, but I would have found it more convenient to have at least one mic input on the front, for easy connection without having go to the back of the rack.

Each input channel has individual 48V phantom power switches and -15 dB pad switches plus gain knobs. Audient calls channels 1 and 2 the “Retro Channels," because they’re equipped with two types of coloration circuitry (Dual Stage Color Saturation Controls) that can add vintage style sonics to the input . HMX is a tube emulation. IRON is a transformer-based circuit. When they’re off (both channel 1 and 2 have individual on off switches for the HMX and IRON features) the preamps are designed to be neutral.

In addition individual switches to turn on HMX and IRON, each channel has control knobs for each of the Retro flavors. The HMX knob ranges from Sweet to Thick, and the IRON knob from Sparkle to Growl. (I’ll talk about what they sound like a little later in the review.)

Channels 1 and 2 also have phase reverse switches. All eight inputs are equipped with peak and signal present indicators. A manual sample rate adjustment switch is provided on the front. The max sampling rate it can handle is 96 kHz. The unit features Burr Brown A/D converters, which are an important part of the excellent sound quality you get through the digital output. 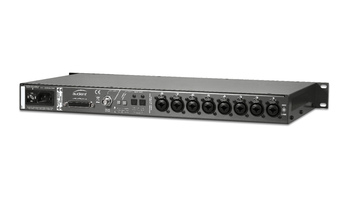 In addition to the combo inputs, the back panel has a DB25 (Tascam format) connector, which gives you analog outputs for the channels, but you’ll need to buy a DB25 cable snake from a third party to access them. Figure on about another $60-120 to buy such a cable. If you’re only using the optical output, though, you won’t need access to the analog outs.

The optical outputs are ADAT SMUX format, and can give you eight channels at 44.1 or 48 kHz, or four channels at 88.2 or 96 kHz. They can also be configured as two channels of S/PDIF.

A word clock output is supplied, as are switches to change the reference level between +18 dBU and+12 dBU depending on what kind of interface you’re using. For the iD14, Audient recommends the +12 dBU setting. If you’re using the ASP800 with external optical devices, a 75 OHM termination switch is provided for when the ASP800 is the final device in the chain.

The unit is powered via an IEC mains input on the back, with switchable voltages, giving it international compatibility. There is no on/off switch, however. I guess it’s assumed that your rack will have a master power switch, but I like having the ability to turn a unit on and off individually, when needed.

I was impressed with how easy it was to get the ASP800 connected into the iD14 system. It’s outputs showed up in the iD14’s iD Mixer software right away after connection. I also used it with my MOTU828 MK3 Hybrid interface, which has an ADAT optical input. In both cases, the inputs showed up in my DAW, and the only thing I had to change was the clock source, to make the ASP800 the master.

I was very pleased with the sound of the mic preamps. In their normal state (without the coloration circuitry on channels 1 and 2) they sounded present, quiet, and clean. I used an Oktava MK-012 for recording acoustic guitar, mandolin and spoken voice through the ASP800. I used the DI for electric guitar and bass. The results were uniformly excellent.

I also compared those same sources with and without the HMX and IRON circuits provided in channels 1 and 2. When they were on, I was able to add some nice coloration to the input signal. Here are some examples. 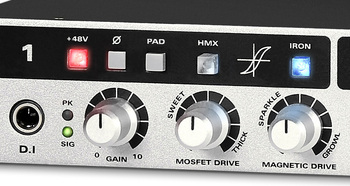 This is a miked Taylor 510ce acoustic. The first time is through the ASP800 with no coloration. When it repeat after stopping, it’s with the IRON circuit on and set on the Sparkle side.

This example features a miked Eastman F-style mandolin. The first time it’s without IRON, but after the stop it's on. I used the same setting as on the acoustic guitar example.

Now here’s an old ESP Strat through the DI input using some amp modeling from Digital Performer. The first time the ASP800’s coloration is off. When it repeats, the HMX knob in the area marked “Sweet” and the IRON knob set to “Sparkle.”

Finally, here’s a spoken voice recording. It will tell you when the effects are on and off.

Overall, I found the coloration circuits to be a nice addition, which allow you to subtly alter the sound of the preamps. It’s almost like having a collection of pres with different sonic characteristics.

The ASP800 ($799) is not the least expensive 8-channel mic pre unit out there, but it's pretty reasonably priced, especially when you consider that you’re getting eight Audient console mic pres and all the other features. It’s easy to configure and it sounds excellent. The HMX and IRON circuits on channels 1 and 2 give you some nice additional tone-shaping options. If you have an iD14 that you want to expand, it seamlessly fits into the system and can be controlled with the iD14’s iD Mixer software. It will also work well with any other mic interface with an ADAT optical input.

My only complaints were basically pretty minor, such as the lack of an on/off switch or front-panel mic input, and the DB25 connector instead of 1/4” outputs.

If you’re looking to add additional mic pre channels to your system, and you want excellent sound quality with some cool coloration options, you should definitely give this unit a serious look.