An introduction to Granular Synthesis

Granular synthesis, the focus of our efforts today, is yet another example of this convergence. This type of synthesis is based on a new basic unit of sound, which we already mentioned briefly in the fourth article of this series, namely: The grain.

A bit of history

Without going into any details, you could say that granular synthesis was mentioned for the first time in 1925 by Norbert Wiener. He was the first person to think about the idea of applying the concept of "energy grains," taken from quantum physics, to music. 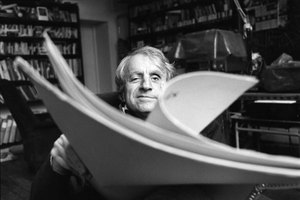 But it was Dennis Gabor, winner of the Nobel Prize in Physics and inventor of the hologram (see next paragraph), who made a theory out of it in 1947, which was later validated by Martin Bastiaans in 1980.  Curtis Roads implemented some of its elements in software form in 1978.

Iannis Xenakis (pictured on the left) and composer Barry Truax are the main ambassadors of this type of synthesis.

Gabor and the limits of Fourier's theory

Gabor observed that while the theory of Fourier is perfect to determine the harmonic components of an audio signal, it is nevertheless insufficient to determine their time localization. Consequently, it's not suited to the task of analyzing and resynthesizing a signal that evolves in time.

To simplify things for musicians like us, you could say that it's incapable of differentiating between a chord (a given number of notes played simultaneously) and an arpeggio (the same notes played in sequence). That's due, among other things, to the fact that Fourier's theory reduces the signal to simple sine waves...of infinite duration. This means that other basic elements are needed to synthesize an evolving sound. Grains are the result of this research.

Grains under the microscope 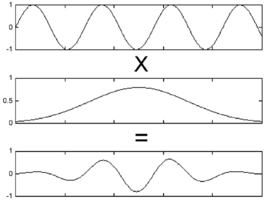 Grains present a great advantage in relation to Fourier's sine waves: They are limited in time! They have both a starting point and a modulating envelope (see article 8 of this series), which encloses the waveform itself.

The illustration on the side shows a sine wave enclosed by an envelope. This waveform can be a simple waveform or a signal produced by other types of synthesis, like frequency modulation (FM synthesis), which we will see shortly. The waveform could also have been stored in a wavetable (see previous article). Or it could even be an element taken from a complex audio signal like the digitization of a music note played by an instrument.

Each grain comprises its own frequency (which defines its pitch) and phase information. The length of a grain determines our capacity to perceive its pitch. In fact, it has been proven that the human ear cannot estimate the pitch and spectral (harmonic) content of a grain of less than 100 ms. The shorter a grain, the easier it is to locate it in time, while the longer it is, the easier it is to identify its harmonic content.

The length of a grain, as well as the amplitude of its waveform, are defined by its envelope. The latter can be "segmented" (attack, "steady state," which corresponds to the sustain of a traditional envelope, and release) or "functional," meaning it's based on a mathematical function. It can be stored in a wavetable ─ or rather an envelope-table ─ with the same advantages as a sample (see previous article).

The envelope can also be provided with a pan parameter, to locate the grains in space.

The idea here is not to play back grains in sequence, like samples (as determined by the first definition of sample in the previous installment). In the next article you'll learn that there are different ways to play back grains, each of which constitutes a subcategory of granular synthesis. However, you could say that, regardless of the scenario, playback is subject to the spacing between grains. This spacing can be represented by a frequency or a fixed time (period). 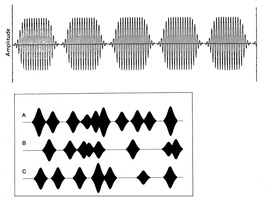 In the image on the side, you can see sound grains grouped in different ways. In line with what was stated in the last two paragraphs, while the pitch of each grain is contained in itself, the perception of the overall pitch of an audio signal made up of grains depends on two factors: The length of the grains and their density (determined by the triggering frequency).