Let's start with an effect we already evoked in the previous article, namely...

This effect, as we already mentioned in the previous article, is one of the most widespread.

The pitch wheel allows you to modify the pitch of a note in real time. It's a continuous-type effect. Do note, however, that on certain devices the wheel is replaced with a touch strip or keypad. This allows you to hit certain values directly depending on where you touch the strip or keypad.

On synths with several oscillators, the Unison function allows you to make the different oscillators work together in order to create a fatter sound. This "fatness" effect can be emphasized by modifying different parameters.

The most common are the detuning of one or more oscillators or spreading sounds across the stereo field, if you have a synth with stereo outputs. Like any stereo effect, you should make sure that the mono mix doesn't create any phase problems (read the second article from this series to review that issue).

Do note that certain virtual-analog (VA) synths ─ which have strictly digital oscillators, DOs, as we saw in article six ─ provide waveforms, like the SuperSaw, that reproduce this detuning effect between multiple waveforms.

The portamento effect reproduces the frequencies between two notes. It corresponds to the Glide parameter commonly featured on synthesizers. This parameter often has two modes: Mono and Legato.

The Mono mode produces a portamento effect, regardless of the length of the notes or whether they overlap or not, as you can hear in the following example. The sequence starts without portamento and finishes with the effect enabled.

In this audio example, you can hear a melody composed of notes played one after the other, first without and then with portamento in mono mode:

Legato mode only works with overlapping notes. Like the previous example, the next one starts with a musical sequence without any effect where the 5th and 6th note, as well as the 10th and 11th, overlap. Consequently, even if the portamento effect is active, it only manifests itself on the aforementioned notes. 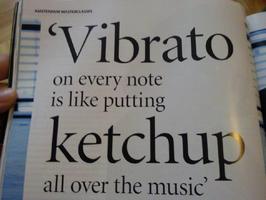 Vibrato is an effect consisting in very fast pitch variations of a waveform's fundamental frequency.

In the following example, the vibrato effect increases gradually and ends up fading out.

Tremolo, for its part, is an effect obtained by very fast variations of the amplitude of a waveform.
The example evolves exactly as the previous one:

As we saw in the seventh installment of the series, a filter's cutoff frequency can be fixed with a potentiometer or it can be controlled by an LFO to make it vary over time. In both of these cases, the notes played on the keyboard while the filter is active will be subject to the latter's action.. 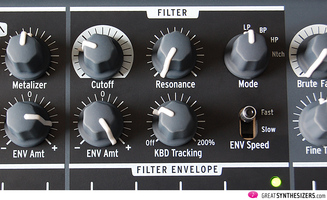 Take for example a low-pass filter whose cutoff is fixed at a given frequency. It will not let through any notes whose frequency is above the cutoff. To remedy that, Keyboard Tracking lets the cutoff frequency change depending on the note played. This allows you, for instance, to retain the fundamental frequency of each note, regardless of its pitch, while filtering out the overtones.

In the upcoming article, we'll see other effects that are pretty common on synthesizers, like flanging and even Pulse Width Modulation (PWM), which we already mentioned in part four.