The Different Forms of Granular Synthesis

Granular synthesis in itself is a very vast subject. It includes multiple sub-categories, which Curtis Roads describes in detail in his book The Computer Music Tutorial. I'll focus here on the four that seem most representative to me, even though I know this is entirely subjective and anybody could question my decision.

The first two are based on so-called Fourier grids and wavelets. The main characteristic of these two very similar forms of granular synthesis is that they offer the possibility to modify the pitch of a sound without affecting its length and vice versa. Most modern time-stretching and pitch-shifting tools, which you can now find on almost any audio software, are based on this principle.

Despite the complexity of this method, it's easy to find its counterpart in the analog realm ─ the Tempophon, which I'll describe in the following paragraph. 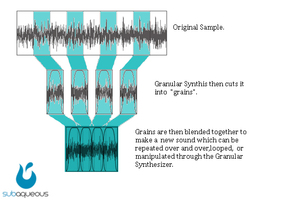 The image on the left depicts the principle of granular sampling, as well as the repositioning of grains between themselves.

For its part, pitch synchronous granular synthesis (PSGS), another form of granular synthesis, is designed for the generation of sounds with formant regions in order to synthesize human voices very convincingly, for instance. Remember that a formant is a characteristic of sound that defines vowel sounds produced by the human voice.

And, finally, asynchronous granular synthesis (AGS) allows you to scatter grains in the soundscape. The groups of scattered grains are called clouds. The parameters of each cloud of grains are defined statistically. This is the preferred method to create spectacular sonic mutations and to blend individual sounds more dramatically.

The illustration below shows clouds of grains represented in the frequency/time plane. 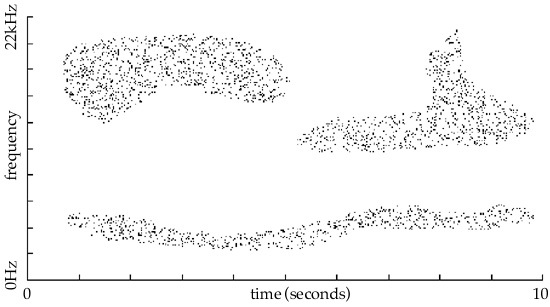 Dennis Gabor (see previous article) didn't just settle for theorizing about granular synthesis. He also put himself to the task of inventing machines that translated his theories into practice. However, given the lack of computers to process the data generated by this new form of synthesis, these machines couldn't take full advantage of the theory.

But his work spawned and inspired very interesting products, like the Tempophon, which was manufactured by the Springer company in the 1950s, and ended up in many acoustic-electric and electronic studios.

Even though it takes us away from synthesis per se, it's useful to describe how it works because it clearly illustrates how grains are used for time-stretching and pitch-shifting.

So, in the case of the Tempophon, the original sound, which is printed onto a magnetic tape or film, is copied in "small bits" ─ grains ─ onto another tape by a rotary recording head. This head is in contact with the original sound only once per turn. And, depending on the speed of rotation, it will capture bits of sound that are separated more or less from each other on the original, but which are nevertheless recorded closer to each other on the second tape. Thus, the head might record only the beginning and the end of a sound, omitting the middle part, during two turns and put them together on the second tape. When playing it back it gives you the sensation of being sped up (beginning+end with no middle part), without the pitch being modified. To modify the pitch you can vary the playback speed of the second tape.

"Aha, but if the signal's playback speed is modified as well, won't the relationship between it and the pitch be affected?" you ask. Well, you only need to compensate the playback speed by time-stretching/compressing the signal beforehand by means of the granulation process described earlier. Clever, isn't it?

As you saw in the previous installment, "producing" grains consists basically of applying an envelope to ultra-short waveforms. This could be easily achieved with an analog system based on a simple oscillator — if you were to forget that, on average, a grain represents between one hundredth and one thousandth of a second of the audio signal!

It's easy to understand the difficulties Gabor had trying to translate his theory into reality within the analog realm. It's also clear why the development of computers sparked new interest in it. As I mentioned above, the principle behind grains is at the core of most time-stretching and pitch-shifting tools in modern-day DAWs. On the other hand, grains are used as audio sources on virtual instruments as powerful and widely used as Native Instruments' Absynth, Spectrasonics' Omnisphere and Propellerhead Reason's Malström. Not to mention all manner of synth-freaks who have a blast developing tools with programming languages such as MAX/MSP.

Granular synthesis is winning over supporters mainly because it allows users to create the most bizarre sounds, positively abolishing the frontiers between all types of sound-generation tools. And now that I mention it, there's another form of sound generation that I have only briefly addressed but which nevertheless deserves to be studied in detail in an upcoming article: FM synthesis!