Super Heavy Sound Made in L.A. 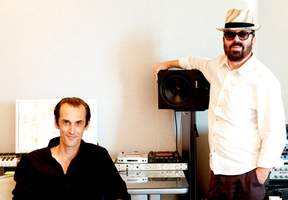 Hi Ned! I know that you’re Dave’s staff programmer and engineer @ Weapons of Mass Entertainment in Hollywood. You’ve been using the Dangerous D-Box along this project. How did you end up setting up this gear for Dave Stewart’s album?

I’ve been working with Dave for a long while now, nearly 15 years as engineer and programmer. He’s marvelously creative and diverse and it’s a constantly exciting and interesting job. When we moved studios last year I took the decision of losing the desk we had as the faders used to stay a zero most of the time, it felt like it was a waste of space. Having the D-Box has allowed me to keep an analog stage in chain which is great, it has also means I have quick hands on access to talkback, headphone levels and inputs.

How did this idea of creating a "supergroup" come to reality?

Dave has always done a lot of work with Mick Jagger and the idea of forming the supergroup came out of a session they did together about 3 years ago. We’d worked with Mick and Joss Stone previously on the Alfie soundtrack so we knew they sounded great together. Damian and AR were then brought in as they wanted to create a truly international and diverse musical project. Everyone worked together for a two week session at Hensons’s studio (former A&M in Hollywood, NDA) where the bulk of the tracks were laid down, all the songs were created in the studio and born out of jam sessions with the band. The rest of the album was finished in a variety of countries and studios (including on a boat and a Caribbean island) and I’ve been involved throughout the entire project. Keeping track of it all has been white a mission !

With all these sessions in different places around the world, how did you manage to keep a coherent vibe and sound ?

With the bulk of the band tracks being laid down in the initial monster jam sessions the backdown of the songs has remained pretty consistent (thanks to Damian’s drummer and bass player). For most of the the sessions we’ve done elsewhere we’ve had it so that we can pull up a great sounding mix with almost noplugins from a stereo Protools session (thanks to engineer Cliff Norrel!) which meant that I could turn up with a laptop anywhere and have things as they were last heard with full access to the parts. A lot of what we did outside of Henson’s were vocals and lyrics but some  songs like "Beautiful People" and "Warring People" were started fully programmed on my laptop and then recorded with the band later.

For this project, did you have to deal with unusual instruments or recording moments ?

AR Rahman has an interesting setup, he uses a midi controller called a Continuum which allows him to do micro tonal performances. He had it hooked up to a Indian sound module (who’s name I forget) which had the most bewildering midi setup I’ve ever seen. It meant he could do some pretty cool stuff though. 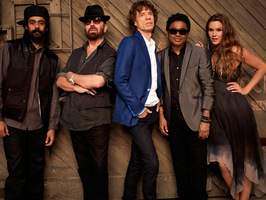 You ended up recording Mick and Joss vocals at WOME. Can you describe the audio chain for recording these two amazing singers?

For recording Joss and Mick I used an Avalon vacuum tube compressor and a vintage U67 ! I generally don’t use any eq and only a minimal amount of compression.

Back to you, I’ve seen that your background - and present activities ! - are based on programming and producing. How and when did you start programming and how did you end up engineering?

I went to the SAE in London which gave me my basic knowledge (nearly 20 years ago) and then started as an assistant in London. I started programming very early on using Digital Performer as it was the only software you could get on a mac at that time and an assortment of midi gear. I still love the AKAI S1100 samplers although I haven’t used one for years, there’s something about being hands on with knobs and buttons that I miss.

Apart from Dave Stewart, your client list is quite impressive, including programming credits for Mick Jagger, Katy Perry and No Doubt. What is exaclty your work with these artists and what do you use?

I was lucky enough to be involved with all these artists as the songs were being written, often not in a traditional studio setting. I have a small and light working setup with which I can record and build up tracks as the ideas come together. It means that we can work in a relaxed and informal manner which is invaluable during the writing process.

I usually run Digital Performer along with a traveller interface and use a combination of plugins: I love the Spectrasonics stuff, particularly Omnisphere for keyboards and synths. The scope of sounds is great and I love that it’s quick to get things up but there’s also the depth to allow you to really tweak things to my needs. I’m often working in writing environment where vibes have to be gotten together quickly so it’s important to get to sounds quickly and easily.

I also like the Rob Papen plugins for analog style synths, BFD for ‘live’ drums, Machfive for sampling and the Native Instruments stuff is good for a broad range of traditional instruments and real geeky synth stuff. Slightly less well known plugin I like are Sonic Charge’s Micro Tonic and Synplant. For strings I use an East West library, Pianos - Ivory, traditional bass - Trillian. I also use a Receptor that runs a lot of the plugins which is particularly useful when traveling as it reduces the strain on the laptop.

Once ideas are down, I start building the track up around them. I mainly use Digital Performer it has some nice built in features (like autotune) and work well with MIDI but I also use Protools a lot as it’s the standard DAW for so many things. The main room I work in has an 896 MOTU with two 8Pre’s so in the inputs along with an Avalon and an 1176  with Focusrite pre for a couple good mic chains. Plugin wise I use a lot of the UAD stuff, the EQ’s and compressors are really well modeled and sound great.

After the song has taken form we usually move to a larger studio to finish off, adding live drums and other overdubs. Working in this way means that the initial vibe and excitement that comes when writing a track can be captured and maintained through to the final mix.

You also have engineering credits for great artists, like Ringo Starr for example. How much of engineering do you do today, compared to programming ? Is there a definite, clear separation between these activities or do you see it as a whole production work ?

The majority of my work is geared towards the programming side of things, obviously that does include engineering i.e. vocals, guitars and doing mixes but for me true engineering is sitting behind an SSL and micing drums, orchestras, full bands etc.. And that’s something that I don’t really do very much of these days, although I always enjoy working with great engineers and live musicians.

On recent Stevie Nicks project, you basically did... everything, from keyboards to engineering, via Protools and programming ! Do you see yourself as a producer or do you work like that because of the tools we have today ? Or both ? Or is it a time/budget constraint ?

I had a great engineer, Scott Campbell, to work with on the Stevie project which I really enjoyed. It meant that I could concentrate on getting the programming sounding the way I wanted whilst he worked on getting the band sounding great, hopefully making something that was more than the sum of it’s parts. A lot of the work with Stevie was done at her house as it was a great environment and we could work in a relaxed way. The tools available today made it possible to do all the writing and vocals there with a massive and costly studio install. 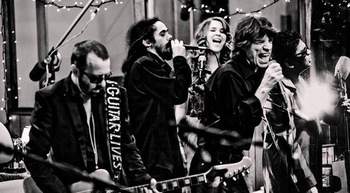 Is there something you try to achieve in every work you do ? From an artistical, technical and human point of view, which aspects in the music production process do you take care about the most ?

Something that I’ve learnt from working with Dave Stewart is that the vibe in the room in pretty much the most crucial element (and he’s a master at it) and that nothing kills a vibe faster than having to wait on technical reasons. Being able to quickly interpret people’s ideas and get things sounding exciting with a minimum of fuss is essential. In essence: people do their best work when relaxed and having fun and if that means recording in someone’s living room on a SM58 to get the best vibe then that’s the way it should be done (especially during the writing process).

The most important lesson I have learned however is: Always be in record!

As long as you can remember, what was your best studio moment ? And your worst technical nightmare ?

Be able to witness the writing process with great songwriters, as I’ve been lucky enough to, is always a magical experience. To start the day with nothing but an empty session and finish it with a song, created from thin air is something that never gets boring. Technically working in Jamaica has posed a few moments, unreliable power, blown speakers and the like... We ended up hiring a sound system from the local DJ when we worked with Shakira out there !

Just to finish, please can you tell us the 5 pieces of gear you couldn’t live without and why!

My Mac (obviously). KAOSS Pad (great fun for FX), portable M-Audio keyboard, MOTU interface and my sample library. Pretty much ready for anything !