When Antelope goes for greater Synergy

The first thing to observe is that the Discrete 4 Synergy Core IS a Discrete 4. It has the same physical traits, same dimensions (261 x 44 x 208 mm for 1,7kg), same screen, same knobs (who changed from black to grey) and same connectors. Eventually, the “Synergy Core” logo on the front panel was added.

On the front panel, we can find the first two XLR-Jack (6,35mm) combo inputs with switchable line/mic/instrument preamps. The other two analog inputs are located on the rear panel and can only be switched to line and mic level. On the right side of the front panel, we can take notice of four headphones output; it is rare enough that we should mention that all of those outputs are independent in terms of both volume and origin of the signal. In the center, there is the screen with a rather high level of definition, the three buttons and the big pushable notched knob. All of those will enable you to adjust levels for inputs (preamps) and outputs (headphones, analog monitor out and line out), and also to have a visual general overview of gain levels for the inputs, as well as to get a quick look at the clock sync and sample rate.

Even though it can be a bit more time consuming to scroll through the menus to configure this input or that output instead of having dedicated knobs, the machine is pretty fulsome at this point. But we’ll stay honest and point out that this is one of the reasons why the interface remains so compact.

On the rear, no big surprise too, with the two analog inputs we talked about earlier, plus three pairs of Jack stereo outputs (four line out and one monitor out), the BNC format Word Clock input/output, USB 2 and Thunderbolt 2 connectors, and ADAT and S/PDIF digital input/output. The external power supply can be plugged using its connector including a screw-on fitting feature, to avoid any untimely unplugging. Last thing to know is that the Discrete 4 does not have a power switch, which can be inconvenient for some people. 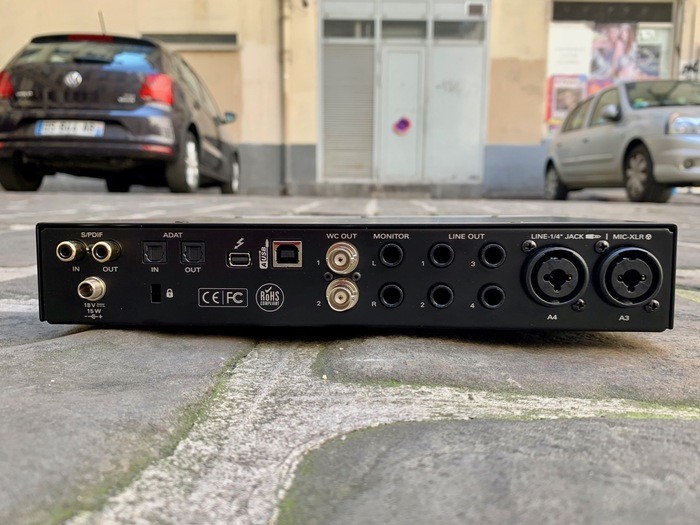 The major innovation about the Synergy Core is the two added DSP chips to support the FPGA module, which was already in the original Discrete 4. After a few questions to the developers about this, we found out that they faced extensive period of development for the powerful FPGA. They had satisfying results for EQs, preamps and compressors, but they had to spend too much human resources to program the reverb known as the Auraverb, and that is why we could not find any modulation FXs in their plug-in catalog. This shift towards DSP would allow them to enlarge their catalog and make it more diverse, allow for shorter development times and also to integrate plug-ins from third-party software publishers. But we must keep in mind that those are just promises from the developers and potential buyers are making a bet on the future. However, Antelope promises a first plug-ins delivery at the end of the month (update 11/21/19 : 3 new plug-ins available : Vari-speed Tremolo, Space Flanger and Opto 2A. More is coming with Antares' Autotune), even though with the 36 included effects (mainly compressors, EQs, mic preamps and amp simulations for guitar) you can already keep yourself busy. Those are good, but not replacing our personal favorites that we can find at Positive Grid for example. The EQs and compressors, still, offer solid value and we use them on our live monthly podcast. Antelope also offers to sale plug-ins, which prices are gravitating around those of Universal Audio’s (250 to 300€). Apparently, this is the price to pay for integrated effects to audio interfaces…

We will observe as well the presence of the Auraverb reverb, of many good uses, even though you can use only one at a time. A master de-esser and the AFX2DAW are also available in the store. The latter will allow you to use Antelope effects in your favorite DAW (up to 16 plug-ins, 4 effects per plug-in) which is a great news! However, only Mac and Thunderbolt users could benefit from this feature and its price is fairly high (195€). Too bad!

We set the buffer size at the minimum (32 samples) in order to get the lowest latency possible: 0,96ms for input and 0,96ms for output (in 96 kHz) were measured. That’s an excellent result, thank you Thunderbolt!

To test the interface, we assessed it with our APx515 by Audio Precision, and we will compare the results with the ones from previously tested interfaces.

Here are the results with line level signals, at a sample rate of 96 kHz: 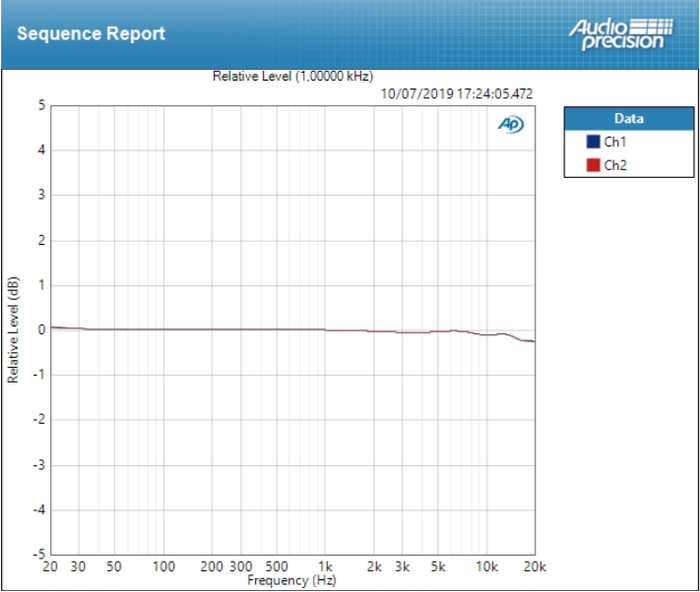 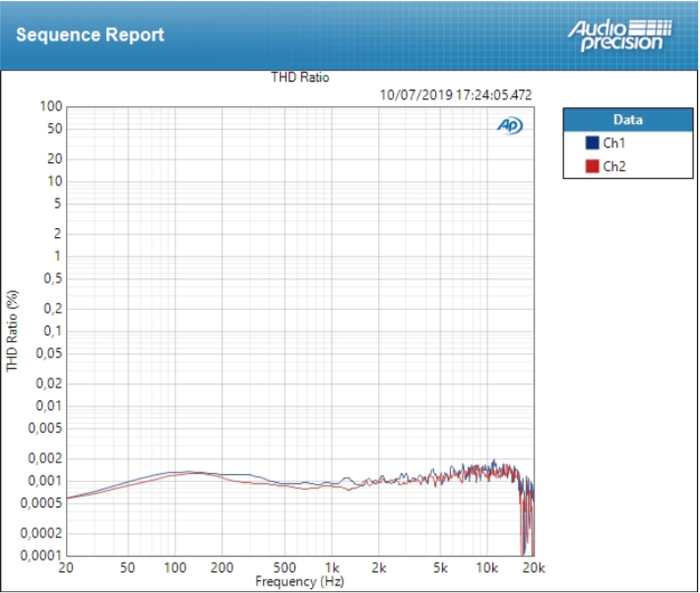 With a deviation of ±0,171 dB, the Discrete 4 Synergy Core is ranking pretty well, given its price and the amount of inputs/outputs it offers. We can find better results elsewhere (the last Apollo got ±0,097dB), but most often for a far superior price (2,5 times more for 4 preamps). This result seems pretty much normal to us, and we’ll notice a very light roll-off at the upper end of the spectrum (talking here in one-tenths of a dB).

The distortion always remains under the 0,002%, whatever the frequency might be. This result is also very good at this price tag, even though we can find better elsewhere but often at much greater expenses.

Here are the results for mic level signal with the gain set at 34 dB. 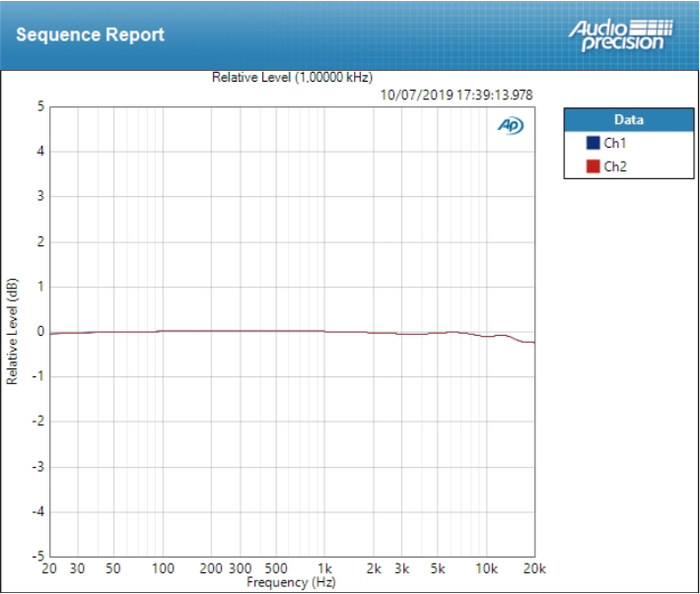 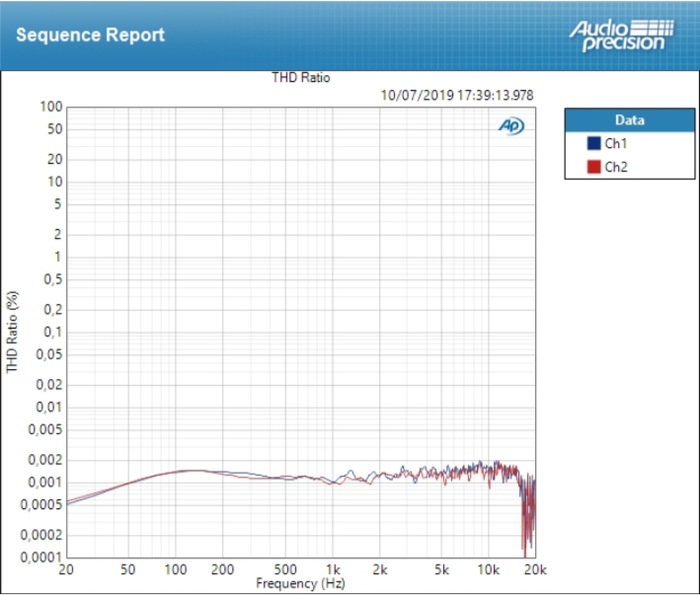 The deviation got us surprised as it is slightly better (±0,138 dB), which is greatly appreciated, and we’ll notice the same outline with a light roll-off at the upper end of the spectrum. The distortion remains identical with the line level, with less than 0,002% throughout the spectrum. Those two results show that the integrated mic preamps are very transparent, which is a good thing considering that the manufacturer is offering preamp simulations in its catalog.

As far as the background noise goes, we obtain 93 dB of signal to noise ratio at 34 dB gain level, a very honest result considering the price.

We also tested the headphone output and the results are quite satisfying as well, with an almost identical deviation of ±0,144 dB, a distortion rate lower than 0,003% (at maximum volume), a signal to noise ratio at 95 dB, and power at 7,9 Vrms, which is not a lot but highly sufficient with the majority of headphones.

To sum up, audio performances seem ultimately satisfactory given the price and the number of inputs/outputs. This is often one of Antelope’s biggest strength.

Antelope adds one more string to its Discrete 4 bow through the addition of two DSP chips, a sign of a brighter future as far as plug-ins goes. The developers’ promise is to offer more diverse effects (reverbs, modulation effects) and in a larger amount, even though the included catalog is already pretty full (36 effects!). We hope that they’ll keep their word (update 11/21/19 : already 3 new plug-ins available), because the Discrete 4 Synergy deserves it, considering its good price to performance ratio.