Apogee One for iPad & Mac Review

At a time when "nomad" rhymes more and more with iPad, Apogee has introduced an update of its product that, even if not overtly presented as V2, offers several new features, besides iOS compatibility, that make it worth the detour.

The first obvious change is the interface's new look, which is less stocky and larger than its older sibling (renamed One for Mac) with the following dimensions: 6.4 in x 2.2 in x 0.8 in (16 cm x 5.5 cm x 3.2 cm). So, despite it having grown, it still remains ultra-portable. It is almost the size of a TV remote. This modification is easily explained by the fact that several new features have been added in order to make it usable with iDevices that cannot power it solely via USB: on the back side there's a compartment for two LR6 batteries, as well as a connector for a PSU (included). Apogee did a good work and, in case you use a PSU, the Apogee One will also use it to charge your iPad or iPhone. 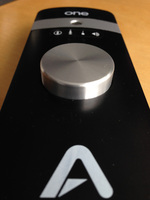 These novelties in terms of power supply come hand in hand with a minor reorganization of the interface, with the mic being moved to the top while the multi-function encoder is more in the center. In order to highlight the presence of the mic, which distinguishes this One from many competing products, Apogee underlined its presence with an aluminum band, giving the interface a very nice touch. And let me use this occasion to praise its built quality, which has been improved by replacing the old plastic body with a die-cast metal one for the most essential parts of the interface, and with a rubber base to guarantee a good stability: a major change with respect to numerous cheap plastic products that abound in the field.

One brief remark: besides some cables that are much welcome (USB 2.0, 30-pin and Lightning) and a clear and helpful user guide, Apogee also includes a clip to attach the One to a mic stand: a nice detail considering that it used to be an optional accessory costing $20. It only lacks the table top mic stand…

There are no more visual novelties, but the essential changes are to be found elsewhere, because this One for iPad & Mac also made progress in more than one functional aspects. 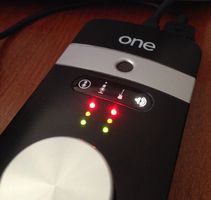 While the sampling rate of the first version was limited to 48 kHz, this new version can presently handle up to 24 bits at 96 kHz. But even more interesting is the fact that it allows us to manage two inputs, which gives us many more possibilities than before: we can record the instrument and the mic inputs at the same time, or the instrument input and the internal mic, or both mics at the same time. To cut it short, apart from iOS compatibility, this is clearly the greatest evolution of the interface, which might motivate owners of the One for Mac to invest in this One for iPad & Mac.

To accompany all this, Apogee included an iOS version of the Maestro software that allows us to manage optimally the interface's inputs/outputs and the different possible combinations. An important note for all iAddicts: it is compatible with all iPad models (including the Mini), iPhone 4 and higher and iPod Touch 5th generation, as long as the latter are running at least iOS 5.1.1.

It's time to see how it performs together with an iPad 2 running iOS 7.0.2 and Cubasis.

There's not much to say in terms of sound: being specialists in converters, Apogee knows its trade in the digital audio world. With 62dB verified gain, the preamps are also up to the standard, especially since they are pretty noiseless.

To back this up, here are the results of the test we did with our Audio Precision rack: 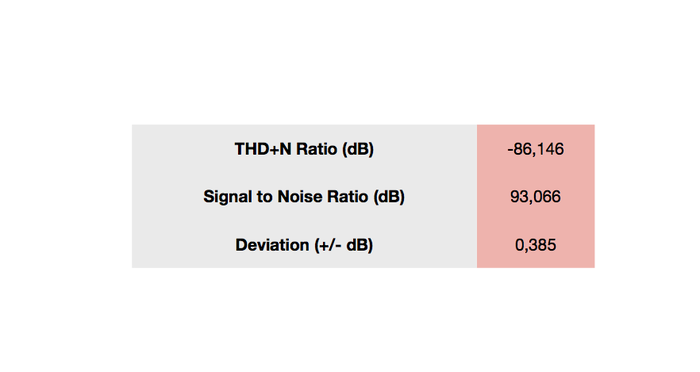 And to be more practical, here's a recording of an acoustic Takamine guitar using the internal mic: 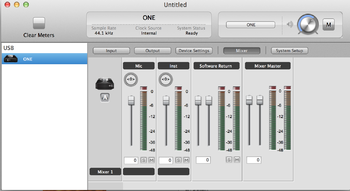 With this take, recorded at the 12th fret, it is obvious that the mic is clearly less aggressive than on the first version. And we gain quite some low end, which is, once again, very good news.

In terms of sound, the free Maestro app proves to be excellent to the extent that it is very easy to use both on a Mac and iOS, and it allows us to control all the interface's parameters without the need of touching the latter: sources (with all possible combinations), input gain, volume and pan for the mix, plus VU-meters to monitor better the levels.

In short, apart from the impossibility to use it in portrait mode on the iPad, I can't think of anything else to criticize the app for. 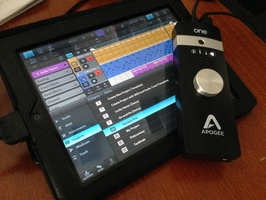 Nevertheless, we have to mention that during the review the interface crashed two times and did not respond anymore with Cubasis (but everything went fine with Garageband). Anyway, I don't think it's necessary to make too much of it given that the previous One proved to be very stable and it probably had more to with my iPad's iOS 7, which despite some very nice features it has, it is far from being an example in terms of bugs, optimization and stability (FYI, updating my iPad 2 to iOS 7 had a big impact on the autonomy of the device, so we have to weigh the pros and cons before making this update, while waiting for Apple to offer an adequate software version).

This revision of the One (which had already seduced us) reveals to be very exciting, whether or not we are sensitive to iOS compatibility. However, while Apogee's interface certainly provides many advantages in the all-in-one nomad segment, it is also not less true that this new version also inherited some of the defects of its older sibling. Still incompatible with PC and Android tablets, ignoring the tendency of the market, the One doesn't have MIDI connections yet. It is not that annoying on a Mac, considering that we have other USB ports to connect a keyboard controller, but on an iDevice, it will force you to connect and disconnect continuously when you want to go from the interface to the keyboard and vice versa, since the One uses the main USB connector without providing another one. 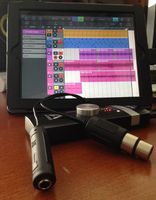 While we celebrate the fact that we can record two inputs at the same time, it would've been nice to have two integrated mics available to be able to record in stereo or even to have several configurations like on the Zoom portable recorders, for example. Even without going that far, the choice of an omnidirectional mic can be questionable: it is true that it will provide a more natural sound than a cardioid mic, but it makes the interface more sensitive to environmental noise. We will be forced to use it in silent environments, which is not very compatible with the mobile experience and certain types of use (interview in a restaurant during lunch time or live music, for instance), where we will need to resort to a remote mic.

The only thing left to talk about is the price. Costing 100 dollars more than the previous version, the increase might be justified considering the evolution of this new model in comparison with the previous one, but it exposes the One to more competition, starting with the Zoom H6 that, on paper, seems to be an even better audio Swiss knife. Depending on the importance of the integrated mic and the appraisal we do of its limitations, we might also consider the Roland UA-22 Duo-Capture EX, which is less attractive, has no mic, works at 48 kHz, and is more bulky, but costs less than half the money and features MIDI, separate outputs for monitors and headphones and is compatible with iOS, OSX and Windows. To sum it up, while Apogee definitely pulled it off nicely, this One still has a lot of progress to do before becoming an indispensable tool for the mobile musician.