The iD14 is clearly an Audient and it certainly holds a strong similarity to the iD22 we reviewed almost two years ago. And like the iD22, its manufacturing quality is excellent and the interface's aluminum housing seems sturdy enough to withstand rough handling in the studio. Its weight is perfect, it's heavy enough to remain firmly anchored to the desktop but light enough to be easily transported..

In terms of connections, Audient seems to have learned from its mistakes and placed the headphone output and instrument input on the front panel (one of the cons of the iD22). They also increased the number of LEDs for the meters (2x8 instead of the 2x4 on the iD22). So the iD14 is by no means a cheaper iD22. In fact, it fixes some of the mistakes of its big brother. We truly salute Audient's efforts in taking heed to criticism. 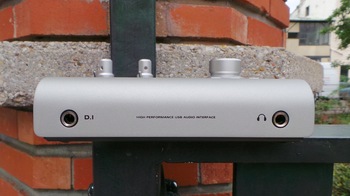 On the other hand, the iD14 lacks an On/Off switch, which isn't particularly critical considering that it can be USB powered (unless you want to use phantom power) and it will turn off as soon as your computer is shut down.

On the rear of the interface you'll find two XLR/TRS combo inputs so you can use it with line and mic level signals. Right next to them are two TRS output jacks to connect your monitors. Finally, a nice surprise is the ADAT input available right next to the USB port. Very good news to those who wish to increase the number of inputs later on (or even right away) by connecting an ADAT-equipped mic preamp unit! Incidentally, Audient recommends the ASP880, which seems to fit the bill perfectly. We really appreciate this expansion possibility, especially for such a compact interface. 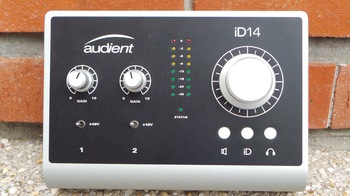 It's easy to get to grips with the main control panel of the iD14. Each of the two mic preamps have a gain knob and a switch to activate the 48V phantom power. The rest (phase invert, PAD and low-cut) is software-based, which is quite understandable (considering the size of the interface) and not too annoying in practice.

On the right hand side there is a big, stepped rotary-push encoder to control the volume of the speakers and headphones, as well as lots of other things, thanks to iD mode. In fact, the latter allows you to choose several actions. With ScrollControl you can use the encoder as a scroll wheel. So, once the cursor of your mouse/trackpad is on top of a virtual knob, you can use the encoder to modify its value. This might prove more natural than the scroll of the mouse or two-finger scrolling with the trackpad for some ─ a brilliant idea. If you don't like this function, you can use the iD button to activate the mono and mono+polarity modes (the second one cancels anything that is in the center of the mix), the dim (-15 dB), or even the talkback (you will only need to choose the source for the mic). In short, the iD button provides access to different practical controls, be it during recording (talkback) or mixdown (mono, mono+polarity and dim).

Show me your iD

There are not many surprises in terms of software, since it comes with the same software as the iD22. But that's not a bad thing, because we really liked this virtual mixer. It's nice, functional and there's not much to add. 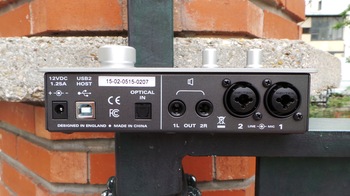 In it, you'll find the two analog inputs, the digital inputs and the software returns. Each has its own pan control and a send towards the Cue bus, which is an alternative mix usually used for musicians via the headphone out. The inputs feature a solo, mute, 10dB (digital) boost, and phase inverter.

The Master section features the two volume knobs (monitors and headphones), as well as the mono, phase inverter and talkback buttons. The Channel View panel allows you to make the mixer less cluttered, visually speaking, by hiding some inputs (analog, digital or the DAW returns). Finally there's a Master control for the Cue mix, as well as a Solo button so you can quickly check the mix you're sending the musician.

Last but not least is the System section. It allows you to choose between ADAT and S/PDIF for the digital input, the source for the digital clock and the talkback, as well as the channel for the mono mode (L, R or C). You can also choose the source for the monitor and headphone outs (main mix, cue or the DAW returns). To finish, you can easily save and recall your settings with the Save and Load buttons.

There's no doubt that the software part is both pleasing and intuitive. Additionally, the manual is comprehensive and easy-to-use, which is a good thing. 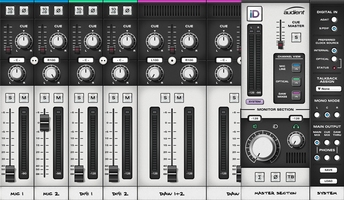 Once we plugged the iD14 into our MacBook Pro, we set the buffer to the minimum (32 samples) to get the best latency: 2.93ms at the input and 2.59ms at the output (at 96 kHz). The results are pretty good for a USB interface, even if they're obviously slightly below some of the recent Thunderbolt interfaces we've had the chance to get our hands on.

To test the interface, we did some benchmarks with our Audio Precision APx515, and we were able to compare the results with those of the interfaces we have previously tested.

Here are the results with line level signals at 96kHz: 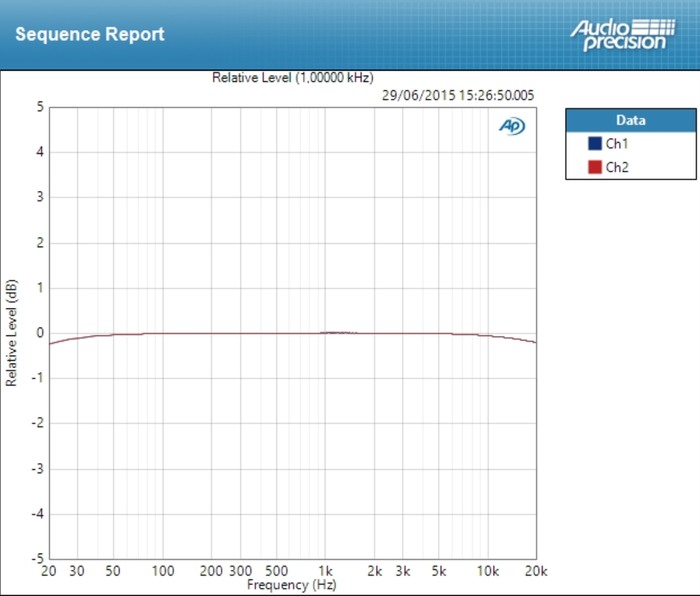 With a deviation of ±0.116dB, the iD14 is far from the major players in the field (with values closer to ±0.03dB/0.05dB) and almost identical to the Focusrite Scarlett Solo which goes for less than $100. Overall, it's still much better than most entry-level interfaces we have tested (which are usually around ±0.5 dB). So let's just say it's a decent result, nothing more and nothing less. To be fair, the small Scarlett is exceptional in this regard, considering its price. 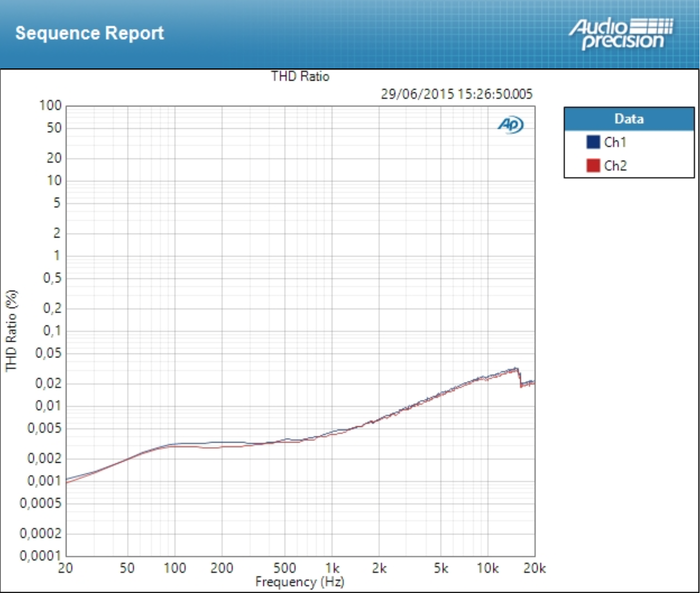 In terms of distortion, it performs pretty well in the low end of the spectrum and increases a bit towards the high end. Overall, it's respectable once again, without being outstanding. Entry-level interfaces usually vary between 0.01% and 0.02%, while the best are usually below 0.002%.

The built-in preamps have 56dB of gain (plus a +10dB software boost), which is very good, particularly for an entry-level USB interface. 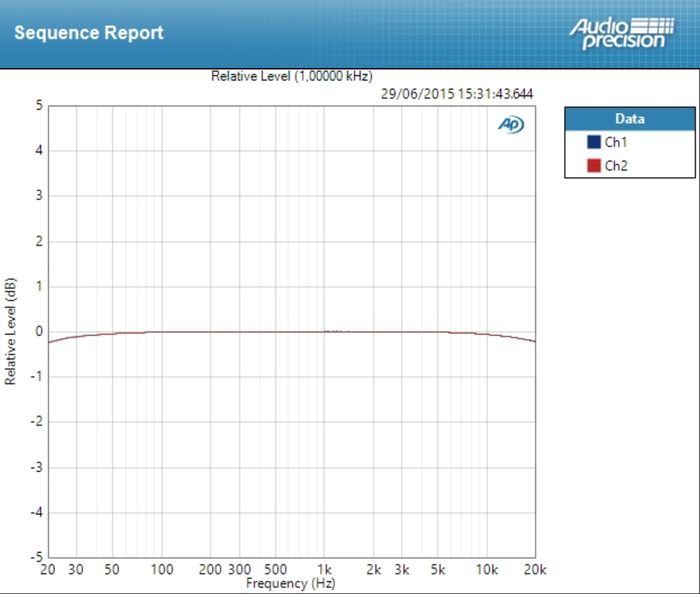 It's obvious that Audient knows how to make preamps. In terms of deviation, with the gain set to 34dB, the result is almost the same as for the line inputs: ±0.122 dB. This means that the preamps of the iD14 are transparent, a very good thing. 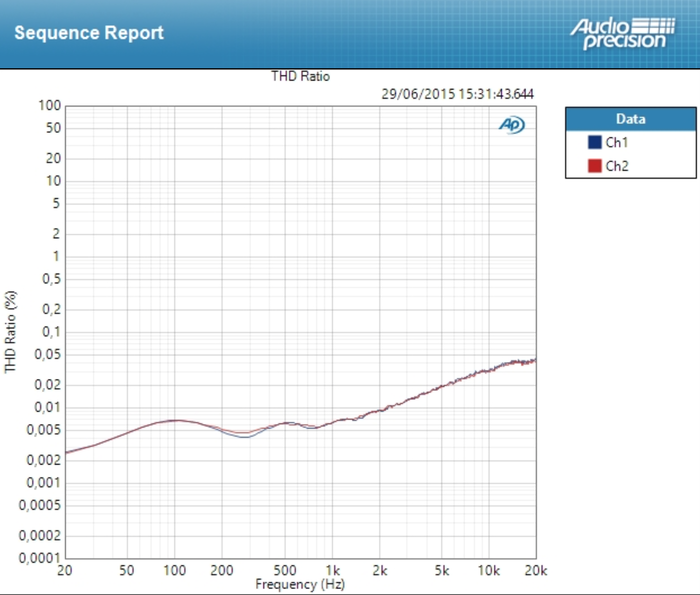 As for distortion, it's pretty much the same thing, the results being very similar to the ones achieved with the line inputs. This just goes to show that the British brand knows what it's doing when it comes to preamplification.

You could say that the preamps make almost no noise at all, considering their signal-to-noise ratio of 100dB when the gain is set to 34dB. And even if it can't rival the Apollo 8 or MOTU 1248 we have reviewed (108 dB), it definitely sits up there among the cream of the crop. It's an especially good result for an interface that sells for around $299 in stores!

To summarize the benchmarking session, you could say that the converters of the iD14 are good but nothing more, while its preamps are noiseless and transparent.

The Audient iD14 is a solid, practical and compact interface with noiseless and transparent preamps and a digital input ─ all for about $299. The virtual console is very nice and easy to use. The desktop format allows you to easily access the encoder, knobs and buttons, especially the very practical "iD" button. It fixes some of the defects we found on the iD22 when we reviewed it, like the number of LEDs for the VU-meter and the placement of the headphone output and instrument input. There's not much more to add about the iD14, except the lack of any internal processing (although for the price, let's not get greedy…) and the need to plug it into the mains to use the phantom power. If you are looking for a high performance, entry-level USB audio interface with two preamps and your budget allows you to go a slightly above the common entry-level contenders, the iD14 might prove to be a lasting solution.