Given their expertise and know-how in the world of consoles and preamps, it was pretty logic for the brand to one day come out with an audio interface. The English decided to start with a relatively simple one, but which nevertheless doesn't lack any sex appeal.

With its desktop design, the iD22 is destined to stand on a table top and once it is on its fours it will not move. Its weight is substantial (4 lbs / 1.8 kg) due to (or thanks to) its chassis made entirely out of metal. The iD22 is quite big for a desktop interface featuring two preamps (227 x 181 x 65.5 — 48 mm) and can't be transported as easily as a Duet 2, a Babyface, a Forte or a Track16. But anyway, this interface wasn't conceived to be mobile because it needs to be connected to the mains. A matter of audio quality, according to the manufacturer… 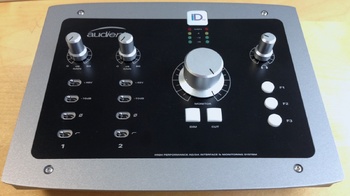 Inside the box we find the interface itself, the PSU, the USB cable and a 2GB USB key with a link(!) to download the latest driver and the documentation, which is very comprehensive. Overall it has a very serious look and it seems pretty sturdy. The volume knob has a very pleasant feel and slides perfectly. The gain pots are a bit tougher, which seems ideal for doing fine adjustments. Nevertheless, we would've preferred digitally controlled gain knobs, which are more practical to recall a specific setting.

Below each mic gain pot there are four switches to activate the phantom power (48V), a -10 dB pad, the phase inverter, and a low-pass filter set at 100 Hz (with a 12 dB/octave slope). Below the big volume knob (which is impossible to control software-wise) two buttons allow us to mute or dim the level (up to -30dB) of the main outputs, generally connected to the speakers: very practical.

Below the headphones volume knob there are three additional buttons that can be assigned to different actions, like activating the talkback (to which we can assign a mic input) or the mono mode (mix both left and right channels or only hear one of them), reversing the phase of the right channel (in order to blend out everything that is in the center, for instance), or even switching to a second pair of speakers. We only regret the number of LEDs (4) for the output VU-meters and the absence of VU-meters for the inputs, which will force us to use the software to set levels. Other than that, nothing seems to be missing and we have everything we need to make our lives easier! 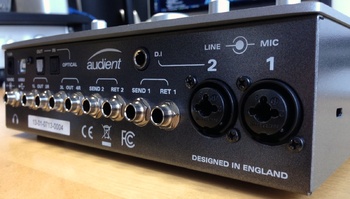 Our first disappointment: all connectors are on the rear panel, even the headphones output and the instrument input, which would've been nice to have in the front. It's a pity, because there's enough space... while the rear panel is pretty crowded. On the right hand side we have the XLR/1/4" jack combos for the mic and line inputs, the instrument input (which replaces the second mic input if we connect anything to it), and the two balanced sends and returns that allows us to connect outboard gear before going through the A/D converters on the iD22 — seldom enough in this type of interfaces to be remarked, a very good point! What's more, the returns can be used as line inputs without going through the phase reverse, the low-pass filter and the pad. The four line outputs for the speakers, for example, are on TRS jacks. And to finish this recount, we have the mandatory USB 2 port and the optical inputs/outputs in TOSlink format for ADAT and S/PDIF. There's no on/off switch, which is a pity given that electricity is not free and disconnecting the cable on the back is not very practical. We also noticed the lack of MIDI connections, which will put some people off.

Another disappointment, which nevertheless seems to be temporary and hopefully will be fixed soon: the iD22 is only Mac-compatible for the time being. According to Audient, Windows drivers ought to arrive soon and since the interface is Class Compliant, it should also be iOS compatible without the need of any certification by the manufacturer. The installation is very straightforward. A very nice virtual-mixer-with-an-old-console-kinda-look icon named iD22 appears in the "Applications" folder: it's cute and not over-elaborate (it reminds me of what Universal Audio did with the Apollo) and it fits perfectly with the hardware. 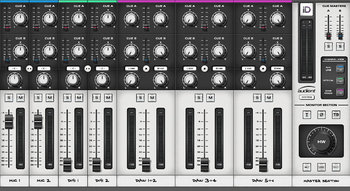 As for inputs, we have two analog ones (Mic), two digital ones (Digi) and three pairs of stereo returns (DAW). You can hide some of these inputs in order to make the interface more easily readable and not to have to scroll horizontally across small screens. Each channel has two sends (Cue A and Cue B), which are stereo mixes that we can get from any physical output, be it analog or digital. We can use them to make mixes for the musicians when tracking or to send only certain things to an outboard processor that can be later routed to the interface's inserts. Each Cue has a volume in the virtual mixer's Master section, as well as a Solo button. Each channel also features the traditional Solo and Mute buttons, a panorama control and the indispensable fader. 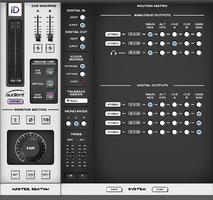 Besides a VU-meter, the Monitor section features controls that we can also find on the interface itself: the mono, phase reverse and talkback buttons, a button to toggle between speaker sets, as well as dim and cut options. The volume control is also depicted but we cannot touch it because it's a hardware-only control. But then why depict it? A mystery... since we only have dim and cut options on the audio interface, it is here where we can assign a function to the three F1-F3 buttons. A simple right-click on the phase reverse or the mono button, for example, makes a context menu pop up where we can assign the selected function to either one of the three physical buttons. So anyone can choose whatever he wants. Cool, uh. Nitpickers will regret the fact that we cannot control functions of third-party software (like a sequencer) with these F buttons.

A small system button gives us access to additional parameters, like choosing ADAT or S/PDIF for the digital I/Os, the clock source (internal or via optical input), the talkback input, the mono mode, and even the trims for the dim levels (up to -30 dB) and for the alternative speakers. This last setting is very practical because the speakers don't usually have the same level, so this option allows us to go from one set of speakers to the other without any volume jumps. 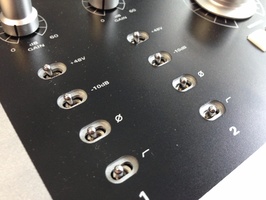 To finish this section, we have the matrix that allows us to assign any source (Main Mix, Alternate speaker, Cue A, Cue B, Daw Mix) to any analog (the two stereo pairs plus the headphones, which have their own channel 5-6) or digital (eight channels) outputs. Once everything has been set, we can save our configuration to recall it later when we need it. Sweet!

We regret the lack of processing options like an EQ, a compressor or a reverb that could come in handy when recording. This problem can be solved partly with the inserts, but not everybody has outboard gear…

Thanks to our Audio Precision unit, we did some benchmarking with the mic inputs. The gain was set to 40dB (the interface provides 60dB of gain. Here are the results: 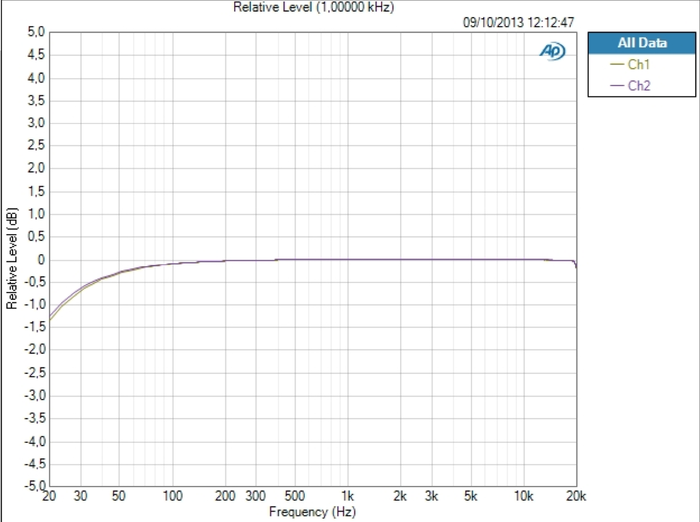 It would have been nice to have a bit more headroom on the mic inputs and with a more linear pot, but since the preamps are very silent it is not that annoying: they work perfectly well throughout the full travel. We noticed a slight attenuation in the low end (-0.5 dB at 35 Hz): nothing to worry about considering the linearity they exhibit across the rest of the spectrum.

To test the line inputs we used the insert returns that have the advantage of being right before the converters. The low-pass filters and phase reverse switches only affect the line inputs on XLR/jack combos. 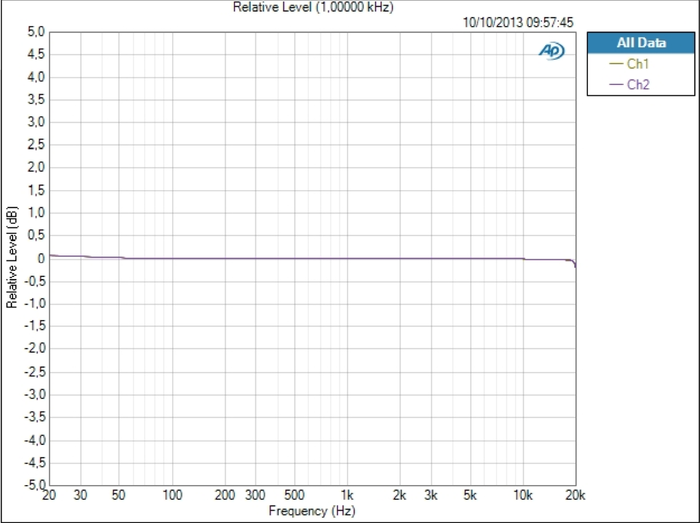 The results certainly met all our expectations, with THD+N values very close to those of high-end interfaces (Antelope Orion 32 and Metric Halo ULN-8), a good frequency response, and especially a very good signal-to-noise ratio and stunning dynamics, the best we have tested so far.

The instrument input also proved to be of very good quality, with a pretty linear frequency response and very good dynamics. 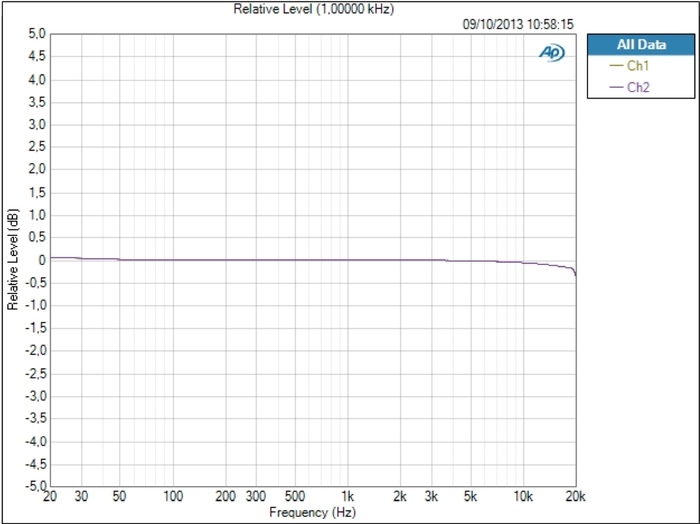 Finally, the analog outputs have a THD+N somewhere between the Orion and the ULN-8 (in other words, very good), a frequency response that isn't as linear as that of these high-end interfaces, but still very acceptable for its price (less than $800), and very good dynamics, just below our Metric Halo. 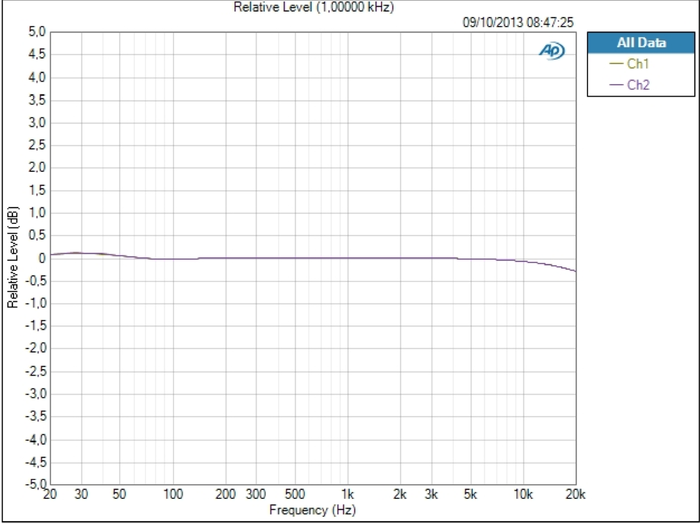 In terms of latency, we measured 3.72 ms at the input and 2.77 ms at the output with a minimum buffer of 32 samples. The driver was very stable with our setup, but unfortunately we cannot say anything about the Windows driver because it wasn't available at the time of this review. And to wrap up this test, here's a take of our Takamine guitar recorded with an Oktava mic (which needs quite a bit of gain) placed in front of it.

This iD22 has some very attractive features, starting with a sturdy build, an impeccable look and a very hands-on aspect due to the desktop format and the directly accessible buttons. Its audio performance is exceptional thanks to its quality converters and noiseless preamps. We would've liked to have some more headroom, but the preamps are still very good, even when pushed to their limits. The instrument input is along the same line and Audient lives up to its reputation.

However, it does exhibit some beginners' mistakes, starting with the lack of internal processing options (reverb, EQ…), a stand alone mode, VU-meters for the inputs, an on/off switch, badly located headphones output and instrument input, and the impossibility to power it solely via USB. Home studio owners looking for a truly mobile interface will opt for a smaller and lighter model. But those looking for a good interface with two preamps, inserts, ADAT, a nice and practical virtual mixer, a reasonable price (less than $800) and a very sturdy build might want to look closely at this iD22 — if they have a Mac.