An RME On My iPad 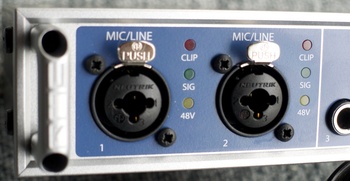 Since the software is exactly the same as the one provided with the UFX interface, do read Red Led's review so you can remember its features.

How Does It Sound?

Unfortunately, we were unable to compare the new UCX with former RME interfaces. However, here is a guitar recording that will allow you to compare the device with an Avid MBox Pro and make your own opinion. Notice that these Gibson J200 recordings were made with an Oktava MK012 microphone and that the gain setting on the UCX was set just below the center position.

With the reference monitors we used for this review (Adam A7X and Focal Solo 6), the sound difference seemed to be minimal (although we still have to double check with a bigger monitoring system). In order to avoid sound differences due to the different preamp stages of both interfaces, we also made two recordings using the line inputs. Once again, if there is an audible sound difference, it is very subtle with our monitors...

Although the manufacturer points out that the UCX is not the successor of the Fireface UC, which is still available today, it's difficult to have a clear overview over RME's product range because the UCX looks like the UC while providing the features of the UFX. A brief summary will be much helpful for all:

Compared with the Fireface UC and Fireface 400, the UCX includes DSP effects (to be used from the TotalMix FX software), new low-latency converters, an Autoset function, and it supports RME's remote control units (the basic remote control is provided with the interface). The only disadvantage of the UCX compared with the FireFace 400 is that its operation requires an external power supply while the 400 can be powered via the FireWire bus.

There are many differences between the UCX and UFX: the UFX is a one rack unit while the UCX is a half rack unit, the UFX can manage up to 30 ins/outs against only 18 for the UCX, the UFX provides four additional analog inputs, one additional ADAT in/out, and has four preamp stages while the UCX features only two. The UFX also offers an AES/EBU in/out (not provided on the UFX), an additional headphones out, a USB port for direct-to-disk applications in standalone mode, and last but not least a small color LCD instead of the two-digit display of the UCX. Also notice that the UCX should have more modern converters than the UFX — we say it "should" because the information provided by RME is not very clear about this.

The last difference is that the UCX is sold with a Basic Remote control and supports the Class Compliant norm.

If you want an RME, your choice will depend on the money you have as well as on your needs. The product range of the German manufacturer is wide enough and only misses a real budget product below the nice BabyFace...