Copper Reference: Is it a bird? Is it a plane? No, it's... Tracktion's debut on the audio interface market. And, it does have tubes. Yes: TUBES.

Described as "American hot rod mentality applied to a boutique, high-end stereo interface", the Copper Reference Superior Stereo I/O Interface (guess we'll go with its shorter nickname, huh? so, howdy, "Copper Reference"?) is to be handcrafted in Seattle, WA using "the finest silicon" for the greatest possible transparency. And, in case it's not the first thing you've noticed, it has a pair of tubes to feed an overdrive circuit so as to add character to just any sound you like. Well, it seems now we've seen this, transparent-sounding interfaces are already sooooooooo 2015, right? Anyway, as they say at Tracktion, this one is "not your ordinary computer interface" (you don't say so?). And, as for its name, it's encased in solid copper.

Little details have surfaced yet, except that it's to be USB connected, that its sample rate goes up to 192kHz and that it is planned to be released this Spring. No MSRP announced as of yet, although the "boutique", "high-end" and "solid copper" references (among others) can certainly be taken as indications as to the kind of (high) price range to expect. 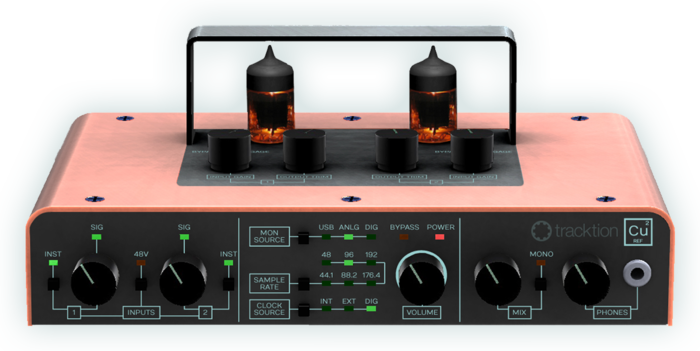