Do note that most of the virtual bass guitars below include the software that allows you to use it with your sequencer. We indicate those cases where that is not possible or where a soft key is needed, which might have a big influence on the price, depending on your gear.

It's also worth noting that, however good they might be, none of these software products is able to replace a real bass player, since none have the ability to translate what the drummer is saying to the bassist and vice versa, yet. ;-)

Here is the list presented in no particular order:

Except for the Rickenbacker, released in 2013, the Scarbee bass guitars are among the oldest virtual bass guitars on the market, which nevertheless does not stop them from still being among the best. It must be said that there is a before and an after Scarbee when it comes to sampling of pianos and bass guitars. Why? Because this former bass player was able to create sound libraries that were at the same time light (several hundred MBs), versatile and featuring very fitting mappings and scripts (with the possibility of defining, for example, on which string the note ought to be played), making MIDI programming much simpler than on certain competing products. And with stunning results! The foundations, the sampling, that is, is simply flawless. From a sound point of view, Scarbee opted for a realistic but unproduced sound (DI-box or amped), which might throw off Trilian users, for example, and will put big sound lovers to work on the mixer. But it does have some defects, like the lack of certain instruments (no Precision Bass with pick for example, no fretless, no 5-strings) and a price/quality ratio that, while being excellent for a single instrument, is far from being exceptional for those who want to get the whole collection. In the absence of a dedicated bundle, the five bass guitars and their amped versions amount to $500, which is very disproportionate in relation to competing products.

Trilian is unquestionably the most exhaustive virtual bass on the market. Besides basses (fretless and fretted, fingered, with pick and slapped) and double-basses, it provides an impressing collection of synth basses, and everything with multiple editing and processing options organized in levels. In terms of sound, it is as splendid as generous, as always at Spectrasonics (too much for the taste of some because it is sometimes necessary to fiddle with the EQ to make it fit a mix). Add to that the possibility to create interesting interactions with Omnisphere or Stylus RMX and you'll agree that, for $299, it offers an excellent price/quality ratio, even if not without defects. Trilian is relatively RAM hungry and programming is not as intuitive as with other products. Nevertheless, it remains the most comprehensive of all instruments dedicated to bass guitar.

Being the most old-fashioned selection, this Broomstick Bass doesn't provide a very detailed sampling nor such a realistic sound as the rest, but it still remains very interesting due to its rather different approach. Conceived by the creators of Virtual Guitarist and Groove Agent, it has the Patterns approach of the latter, which will thrill fans of ready-to-use options, considering that Steinberg's Virtual Bassist, based on the same principle, isn't available anymore. It comes with a lot of combinable grooves with all kinds of bass sounds (electric, acoustic, double bass, synth bass, etc.), plus it has a very attractive price tag ($65) and is uber-easy to use.

Another rather old product, ManyBass is one of those old pots that can still make a good soup. We must admit that, despite their age and even if they aren't among the best, the electric basses offered by this virtual instrument do hit a high mark in terms of realism and the instrument has a relatively versatile sound, thanks to its effective amp/cab section. However, with a price tag of $140 for the basic instrument and $180 with supplementary libraries, it might seem a bit expensive in comparison with competing products. 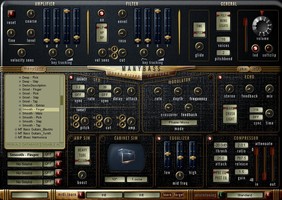 Available only to Reason users, this electric bass collection cannot compete in terms of scripting with what Kontakt or UVI Engine have to offer. But that doesn't make it any less interesting in more than one way, starting with the choice of sampled instruments: besides the indispensable Jazz Bass, Precision Bass, Rickenbacker or Stingray, this Refill also offers a Les Paul (yes, a Les Paul bass guitar), a Gibson EB-0 and a Kay Hollowbody. If we add to that the fact that it is all served with a pile of Combinators that make very good use of Reason's effects, it's hard to disagree that $99 aren't unreasonable. Yet, we have a question: what happened to slap bass?

If Trilian has a competitor in the Kontakt galaxy, this is it without a doubt. In the same manner as Spectrasonics, Vir2 has put a lot of effort into developing the most comprehensive library around: modern or vintage, fretted or fretless, the bass guitars presented here with different playing techniques are complemented with a nice double bass and a fine collection of synht basses. While it does not offer the same richness in terms of editing as Trilian, we must also admit that the instrument is much more accessible: the interface and programming are very simple thanks to some very good scripts. And with a price that has gone down to around $200, it is obvious that BASiS is a good option to consider for fans of Native Instruments' sampler.

As usual, the Frenchmen at AcousticSamples offer well-conceived instruments both in terms of sound and scripting. The electric basses are no exception to the rule and make very good use of the UVI Engine, which allows us to get very realistic-sounding bass lines without breaking our heads. Three models were used to create five libraries: a Fender Jazz Bass (fingered, with pick, both techniques with or without palm mute), a 5-string fretless Ibanez and a Music Man Stingray with three different libraries (Muted/Slap/Fingered). The good news, apart from the quality of the instruments, is their price, because except for the Jazz Bass ($89), the Stingray libraries are sold for $49 each, and the Fretless for $59. And best of all is that there is a bundle that includes all this models plus and excellent double bass for $199. If you already have an iLok, this is an option that ought to be considered very seriously.

Libraries for SFZ or Kontakt 4 and higher

Don't let yourself be deceived by the "Shreddage" and "Picked Edition" tags, this Music Man Sterling played with a pick can be spectacular for metal but it has proven to be much more versatile than one might think at first sight. It offers several advantages: it is available in two formats, Kontakt or SFZ (a format used by several free samplers) and costs only $59, which — given its quality and ease-of-use — is a great deal if you are ready to settle for one and only one bass sound.

Library for Kontakt 4 and higher

Ilya Efimov has made itself a name in the small sampling world in a very short time. It must be said that his acoustic guitars for Kontakt are nothing less than the current reference in the field. And these three basses (two Precision for the Retro Bass and Classic Bass, and a 5-string F-Bass for the Modern Bass), will not tarnish the Russian musician's reputation, quite the contrary. Their sound is undoubtedly real. Making use of advanced scripts he was able to reduce the use of Keyswitches and patches. The only drawback? That, for the time being, there is no bundle that allows us to buy all three at a special rate, while separately each one costs $133. We also regret the lack of a fretless model... but it is in the making! And even if double basses are not the main topic here, the Contrabass Balalaika is well worth looking at…

Library for Kontakt 3 and higher

This library revolves around a 5-string Yamaha TRB 5. Recorded through a DI box with the intention of being able to use it with simulators, this DirectBass plays the modern card in terms of sound while keeping it simple in terms of playing. It is hard to believe it, but this is the only instrument in our selection that includes ready-to-use MIDI files, something that will please those who curse programming. For $70, it is an excellent option, as is usually the case with Pettinhouse…

Before Trilian, there was the Chris Hein Bass, a 12+ GB library structured around a Music Man Stingray played with a pick and slapped, a LeFay, and a magnificently recorded double bass with three different string sets: steel, nylon and catgut. It all comes spiced with plenty of articulations and 112 MIDI-controllable parameters to obtain realistic-sounding parts. Still, there are other options that are easier to program, richer in terms of sounds and especially less expensive than this instrument for Kontakt 2 that goes for $269. Let's just say that a price review or an update wouldn't hurt…

Library in Kontakt 2 format and higher

When talking Orange Tree Samples, we're talking serious things. Sampled with love and scripted with talent, this three basses cover a wide sound range without neglecting the subtleties of bass playing. The Jaco is certainly one of the most beautiful renditions of a fretless bass on the market. And the developer also offers a double bass with an excellent simplicity/sound ratio. The only drawback is that there is no bundle in the horizon, which means that if you want to get all of them you must fork out $360. But we bet that the Cherry Electric Bass, for $129, covers all needs of the average user. While waiting to be able to afford the rest…

8GB of a single Stingray played with a pick: needless to say that the Japanese at Prominy do not waste their time when it comes to sampling. In fact, the only reproach we can make to this SR5 is its character, which is rather inclined towards rock and metal rather than soul or jazz. Otherwise, we must admit that it is very well conceived, in terms of sampling, mapping and scripting (excellent pick handling, among other niceties). An instrument with a huge sound that is easy to play and that, within its genre, is unmatched. It is $150 very well spent.