Let’s start with the new instruments, namely the Voyager Drums for the Best Service Engine 2 player and Emotional Cello, the ultimate creation of Harmonic Subtones for Kontakt.

Each version features a complete kit with direct, overhead and room microphone perspectives, a second option with direct and overhead mics and a third with direct mics only. Samples were recorded at 24-bit / 96 kHz and you’ll get 5 round robins and 16 velocity layers. You can also adjust attack and decay times for each mic perspective.

The library will also include compressor/limiter, EQ and distortion effects, an arranger with which you can blend the drum samples with synthetic sounds and create new sounds, with pitch and delay controls, and an Trigger Sound feature is included to trigger the bonus MIDI grooves. For the latter, you can choose between 5 speed presets, each containing 60 grooves and 12 fills (360 variations in total). Note that you can also use these grooves in your DAW.

Voyager Drums will be available in February for 99 €, but you can pre-order it now and get a 20 € discount.

Emotional Cello is a cello library for Kontakt that includes 3 patches: main with 16 different articulations and true legato ; Sul Ponticello for the second and the third offers special variations and harmonics (ricochet, “morbid” sustain, Bach bow). An effect section will also be included as well as smart scripts. Emotional Cello will be available mid-March for 249 €. 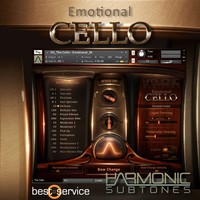 Era II, Eduardo Tarilonte’s medieval instrument library will include 25 new instruments (more than 70 in total), additional soundscapes and vocalists with a new interface. It has a price of 249 € and V1 owners will benefit from an upgrade, which price is TBA. You’ll have to wait until late March to discover the new Era II.

Klanghaus 2 will feature more than 900 new grooves, loops and swells, and all the sounds will be organized in categories and will be editable. 8 arpeggiators/step sequencers will also be included, you’ll have the ability to modulate the presets (14 patch step modulator) and Best Service will offer multis with which you can play with different techniques via keyswitches. Construction kits are also on the menu as a bonus and the GUI will give you access to volume, pan, ADSR, reverb, delay, phaser, bit crusher effects and more.

Titan 2, the mega synth collection, will also be update to a 24 GB (78 GB uncompressed) collection with more than 10 000 multi-samples and 200 000 samples from 266 classic analog, digital, workstations, drum machines and more. You’ll also find a convolution reverb with 900 IRs, a special Randomizer & Attacker, an arranger, a step sequencer, and all the parameters will be MIDI-controllable. All the presets from Titan 1will be included in this v2 and you’ll get a brand new GUI.

Titan 2 will have a price of 169 €, v1 owners will also have the ability to upgrade for a special price, but you’ll have to wait until the end of February to discover the instrument. 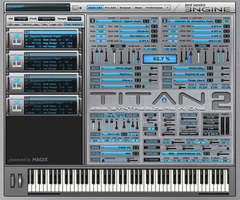