In 2001, Native Instruments introduced Battery to the market, a percussion sampler following in the footsteps of LoopAZoid, software created by NeXoft, which offered 48 tracks, 64 voices, 8 outs and other very appreciated functions, not the least one being the fact that it was free.  The NeXoft team then went to work with Native developers to put together a more powerful tool, dedicated to importing and editing percussion and drum sounds, for a fee.  The first version of Battery had 54 pads, 128 voices (stereo or mono), several output configurations, an interface something like that of LoopAZoid but more intuitive, numerous possibilities for resynthesizing as well as over 600Mb of ready to use samples and kits. The software was compatible with Mac and PC, as a stand alone and a VST plug-in (VST2, DXi, Mas) and could import several different resolutions and formats (Wave and Aiff 8, 16, 24 and 32 bits in LM4 format, Akai S1000 and S3000, SoundFont, LoopAZoid and Reaktor).

We had to wait seven years for a new version to become available as a package with Komplete 9 (basic version and Ultimate) and as a standalone.  Native did, however, in the interim, introduce Maschine, and several other virtual drum solutions.

The software is sold for 199 euros (update, 99 euros), and is compatible with Mac and PC, Windows 7 and Mac OS 10.7, and available as a standalone or plug-in (including AAX native, but not, as of yet, RTAS). You can download it directly from their site via a compressed 3Gb package which, once installed, will take up 4Gb of space on your hard disk. We’ve come a long way since their first version with its 600mg but not quite the 12Gb from version 3.  Don’t forget that Native has been using its own data compression algorithm for quite some time, allowing for file size reduction without sacrificing quality... 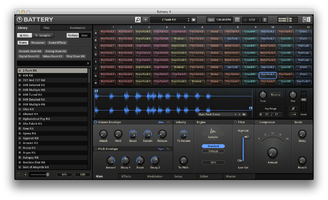 The installation includes the application, the plugs, the O&M Manuals, the Kits and samples.  The manual concerning kit classification as regards to style, (Battery 4 Library Manual English.pdf), wasn’t immediately recognized since it is installed with the Library folder which is installed separately and placed wherever the user wishes. A new scan (Rescan in Preferences>Library) solved the problem. The classification is very well done and saves a lot of time especially when you’re looking for a precise sound for a precise type of music.  It’s also a means of production standardization, if you follow name fields to the letter.

We’re not going to redo a complete Battery test, since you can read the first version and the second version on Audiofanzine.  Battery 3 is missing, so here are some of the changes from version 2 (without including the ones we’ve already mentioned, and including 3.1, 3.2, etc.): audio engine updated, resizable matrix, new editor, multi-effects, one time-stretch per pad (also called a Cell), new formats manager (Apple Loops and Acid), mode Drum within the Saturator, new convolution reverb, color coded cells, 64 bits, etc.

The first thing that surprises you is the total graphic interface redo. Gone is the military green interface with the pink, blue and turquoise sections.  Say hello to the new dominate grey and fluorescent colors for the Cell transparencies and outlines, which is not necessarily a whole lot better: it’s sometimes hard to differentiate between the red, orange or the pink... Its only because the colors can be found again in the editor (we’ll see that later) that we’re not totally lost within color codes (which are used to identify sample families, for example all kicks).  Another improvement is the drag and drop feature that covers almost everything: moving a Cell, assigning Cell output to one of the 4 Buss or to Master, etc. The disappearance of the general Solo and Mute buttons poses no problem, since clicking on the top of the column or lane selects all the included Cells.

The general layout has also been revised with the left hand side gaining some space by regrouping the Library, Files and Automation tabs.  As for the library, Native has adopted the same system as FM7/8, Absynth, Guitar Rig, Kore 2 and co., or a system invented by someone else.  We can’t quite remember.  (If anyone out there does remember where this all started, please let us know in the forum following the test).  We find ourselves with a multi-tag system per group (Drums, Percussion, Sound Effects), then per type (Acoustic Drum Kits, Analog Drum Kit, etc.) and access to the program corresponding to multi choice.  This system is very interesting for sample search, multiple entries (completely user definable) and listening possibilities (with loop option) as well as the Information menu which is a time saver, especially when navigating through WAV files, AIFF and others.

The file menu lets you navigate through the different storage areas in order to search and then import the new sounds (with pre-monitoring).  The Automation tab lets you easily assign an external controller or automation from the host (when using as plug-in) to any function from the Battery 4: click on Add New, move the controller and drag and drop onto the desired function/parameter, with range adjustment (you can force full knob/fader glide to a limited range, for example 36 to 97 even if theoretically the range is 0 to 127).  This is where Native shines (even if this is not always the case with their entire product line...). 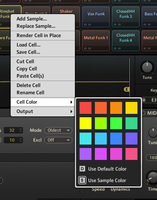 The Battery’s main force (and its main reason for being alive, lest we forget), is its editing capacity. As updates have come along, editing has increased, and this holds true with the 4th edition.  We find a tab system for page navigation.  First of all a Main page, that regroups envelopes (volume, five or three segments and pitch, four or two), velocity dosage on volume and/or height, the filter, a compressor "one knob", the two effects sends (to delay and reverb) and audio engine choice, Sampler or Stretch.  The first one with two modes, Standard (DFD or not) or Vintage (with several types MP-60 or S1200, leaning back on the mythical Akai MPC60 and E-mu SP-1200). Here is an example of a clap from a TR-808 with no effects, in order, from Standard mode, then Vintage S1200 without filter, S1200 Filter Low, and then MP-60.

Time Machine Pro has been added to Stretch, much better than before, which used to be the weak point of the software (and of Kontakt).

Lots of new effects: B4 has added EQ to its already impressive repertory (in the Master section) and a bus compressor in the Solid Mix series (see test here), where a band saturation is now available in Kontakt, Guitar Rig and Co., as well as Transient Master, ideal for work on percussion sounds (compete test here). 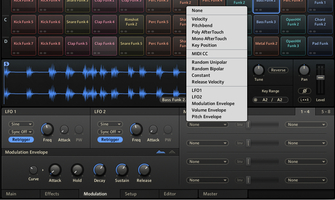 The Setup page lets you adjust all the necessary parameters, from MIDI response to voice management, Midi Delay Humanize and an articulation motor automatically assigning a sound to Rolls, Flams, Shots, etc., with attack and decay adjust.

Let’s move on to the editor where you can create your loops and the number of required layers, just by a drag and drop from the desk top or navigator (sample overlay within the same Cell responding to velocity ranges). This is where we come to realize that the B4 doesn’t always manage Slicing, a real disadvantage, plus the fact that it doesn’t manage multiple sound file import and automatic mapping after transient acknowledgement.  This is one point that could definitely put this software into the “unfavorable” category. 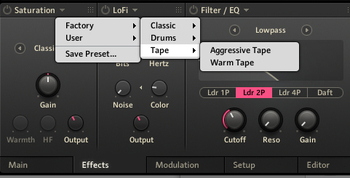 Lastly the Master tab, which offers a complete filter section, another compressor (Classic, Pro, Solid Bus or Side-Chain Bus Comp), a Transient Master, Saturation and a Limiter, all these available on each bus (four in all) and the Master Out which is completely independent.  Bravo, and thank you.  Add the reverb, either algorithmic or convolution (including numerous internal reverbs, plus the fact that you can import your own, re-BRAVO!) and Delay, with a well-supplied arsenal of editable functions, all insure that creative possibilities are very wide indeed.

Before getting to the Conclusion, here are some examples of the kits.  You can also listen to the Native demos.

For future owners of Komplete or its update version, Battery 4 is included in both (normal and Ultimate), so be happy.  Battery 3 or previous version owners; the update costs 99 euros.  You decide if you need the new effects and the numerous new kits.  You’ll find everything you’ve come to love in the new version with improvements (drag and drop).  However, the missing “modern” functions might be included on the minus list.

Now, what about if you don’t have this type of software already?  The Battery 4 plug-in will work fine with your present DAW.  Of course, no slicing, no “on the fly” sampling, but great sounds and editing galore.  Battery 4 is also available as a standalone application but you see the missing features right away; no incorporated sequencer.  And it must be said that the competition does quite a good job in this area: like the sequencer Tremor from FXpansion, for example (see here).  Another important remark: Battery 4 doesn’t do synthesis or modeling.  So keep in mind that it only works on samples.  But, it does it extremely well.

In short, even if this tool is, without a doubt, powerful, ergonomic with great sounds, it will quickly reach the above stated limits which will have to be overcome using other equivalent software packages, not necessarily able to do everything Battery 4 does.  Catch 22?  You could dream of a Maschine/Battery 4 fusion, but this would mean removing one of Natives’ products from its catalogue.  Not everyone can afford a Komplete or a Maschine.