A new collaboration between Native Instruments and e-instruments ─ after Session Strings, Session Strings Pro and Session Horns ─, Cuba is meant to transport us to the mythical island, or at least it allows us to use the typical sounds and rhythms associated with the music coming from the island.

Strangely enough, if we compare it to products dedicated to rock music, for example (instruments, loops, rhythms, etc.), Cuban music doesn't seem to have attracted the attention of sample bank designers. The only two that come to my mind are Beats Working In Cuba (almost 9 GB of sounds) by Zero-G and Latigo (a little over a GB) by the defunct Wizoo. None of which propose melodic or harmonic instruments. For the most part they are composed of complete and/or separate rhythm patterns with different processing options like tempo, groove and mix editing, etc. Beats Working (...) was produced in Cuba with local producers and musicians and is available on the publisher's website, either for Kontakt or in multitrack WAV format. Its richness of styles (13 in total) in spite of the length of its patterns, is definitely an asset. For its part, Latigo ─ created by three members of the Gloria Estefan band ─ hasn't passed the test with the most recent Mac OS versions. In terms of sound and functionality, the software is very well accomplished and allows us to easily create interesting rhythms with different options to edit and modify the groove (even if, in my opinion, Darbuka was more successful from all points of view). There are certainly other (even if sparse) options out there, normally within other instruments or a library in the form of DVD (or CD-Rom).

Native Instruments thus proposes an instrument that, if successfully executed, could fill a void, especially considering that, in addition to typical rhythms, it offers instruments and instrumental patterns not based solely on percussion.

As usual with Native Instruments nowadays, after buying the software we have to download an application (like Connect but signed by Continuata) which will take care of retrieving the file(s) and any eventual resuming if there are any interruptions, as well as of the basic installation. The library's image file is 2.88 GB big. The total amount does not correspond to the actual size, considering that the 11,970 samples underwent the non-destructive compression used by Native since, oh, since... The specs and compatibilities are the same as for all recent NI sample banks for Kontakt and Kontakt Player, starting from version 5.

To activate and authorize it you must follow the same old procedure via the Library tab, the Service Center and the serial number, nothing new under the sun (in this regard). The library is made up of four families: Percussion Ensembles, Single Percussion, Melodic Ensemble, and Melodic Instruments, which we will detail next. 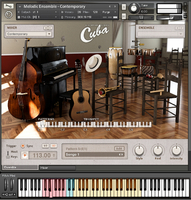 Let's start with the general configuration: all instrument and percussion presets open up in a first window, Ensemble, with a very nice GUI that shows the instruments used and their location on the keyboard, as well as that of the patterns (which we will come to later). On the upper left side we can access the Mixer presets (four plus one Init), while on the right side, in the Ensemble menu, we have access to different variations/configurations of the loaded instrument (for example, when you load the Salsa Ensemble, you have five ensembles at your disposal, numbered 1 through 5).

The principle is very simple: for every instrument in a Pattern we have individual sounds at our disposal. A simple click on the instrument's picture opens up a settings window (usually tuning and volume) and instrument selection (for the Conga 1, for instance, we can choose among three different tumbas and three congas).

On the lower part we find the different options to trigger a pattern (from Kontakt, or from the host, in any case the individual sounds are readily available), there are Sync and tempo options (the tempo can be increased or reduced by two), a menu to select the pattern, a button to extract it as a MIDI file (drag and drop), and there's also Edit, which opens a new window, as well as three knobs: Groove (related to the settings on Edit), Feel (beat type, between a robot-like and a more relaxed feel) and Intensity (to modify the overall dynamics). 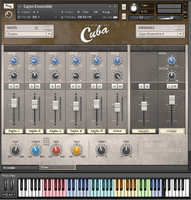 There's a second tab to open the Mixer window, a common feature to all new NI instruments. We have volume, Pan, Send, Mute and Solo controls per instrument, a convolution reverb (aux) with five dedicated IRs (Club, Room, Stage, Studio, and Plate), and we can always access other options via Kontakt's Edit Mode. Each instrument track has its own four-band EQ, as well as Width (acting as a Stereo Enhancer of sorts, yuk!) and Drive (to adjust the insert Saturation) settings. The Master lacks the Drive Control, but in turn it has an EQ, a Compressor (that regulates the ratio at the input of the Feedback Compressor module), a Tape control (to adjust the Gain of the Tape Saturator module), a Send (for the reverb), a Width control (yuk!, again...) and a channel inverter (the right channel becomes the left one and vice versa). A short reminder: all effect parameters, EQ and reverb are accessible via Kontakt's Edit Mode, which allows us to go much deeper than the single buttons on the GUI itself.

Let's start with the Percussion Ensembles. Take a first Pattern, Cascara 1 from the Salsa Ensemble, which is the first by default, and then the four other Ensembles:

Then a Pattern from the Rumba Ensemble, Guaguanco 2. One single Ensemble with Feel modifications:

Next, going back to the Salsa Ensemble, let's try Mambo 2 passing through the four Mixer presets in the following order: Classic, Contemporary, Folkloric and Old School: 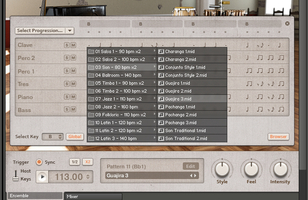 We can play any of the five cajons included (Cajon 1 and 2, Conga Cajon, Cajito, Palito) on top, before, after, or whenever we want, including classic hits, flam, rolls, rim, etc.:

In the Hand Percussion Ensemble, in addition to patterns like Afro: 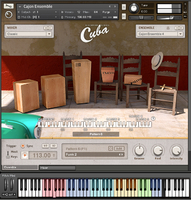 In the Melodic Instruments there are also individual elements: Bass, Piano, Tres (a guitar with three pairs of strings), and Trumpet. There are patterns, as always and, obviously, nearly the whole range of the instrument. A first example, a bass on two different patterns, first with the double bass and then with the e-bass:

The same thing with the piano with an upright and a grand piano:

It will not escape you that the Tres works the same way, the only change being the tuning of the third pair in unison or to an octave: 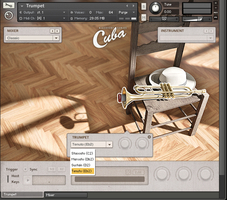 In contrast, the trumpet (muted) has no patterns, only a limited tessitura and four articulations (via KeySwitches): Tenuto, Staccato, Marcato, and Sustain. No volume nor dynamics/timbre control. It's the poorest element of the whole bank. If the pianos, tres and basses aren't at the same level as those of dedicated sound banks, they do allow us to play realistic-sounding parts — adapted to the context, in any case — but it shouldn't be your intention to pass as Chucho Valdés or Felipe Cabera. Here are some examples of the trumpet articulations:

After the solo melodic instruments, here are the patterns that regroup them, complemented by percussions. The idea behind them is still the same: patterns, but instead of individual sounds, there's one sound for all, the muted trumpet and its four KeySwitches to change articulations.

We have four families, Contemporary, Old School, Classic, and Folkloric, which do not only relate to the sound and settings of the Mixer, but also to the type and groove of each pattern, ranging from the classic montuno to more modern rhythms. Here are four examples of each family in the same order stated above.

Just like with percussions, the patterns work really well and faithfully represent different playing styles, techniques and trends. But after the two or four bars have been repeated several times, once the overall sound has been heard, what can be done? Is there no risk of monotony, considering that the software can only play these patterns and that's it (since there are not variations, fills, breaks, intros, outros, etc.)?

Well, no, because we still haven't talked about the Pattern Edit window. As the name implies, here we can edit the pattern but not only, it actually gets much better than everything we've told you before. In fact, regardless of whether they are from one family or another, we can load different patterns at start via a browser and add from six to twelve music styles, each with several rhythms in the form of MIDI files (or .nka). 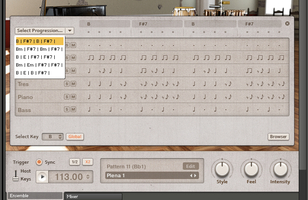 We then have access to as many programming lines as instruments (with Mute and Solo options). Plus, we have the possibility of writing a rhythm using this or that articulation for the percussion instrument (up to seven different ones, identified by a specific symbol), and a chord or a note for the melodic and harmonic instruments. We can also modify the Clave (2/3 or 3/2) and the time signature (4/4, 2/2 or 6/8).

So we can, for example, load different KeySwitches on the same pattern (MIDI or .nka file) and modify each of them to create variations and, thus, have twelve different patterns accessible in real time — which does away with any sense of monotony.

We can certainly not rewrite a montuno piano part but you can always mute the track and play it yourself or draw it in the DAW's piano roll. We can also transpose globally and choose between different harmonic progressions that adapt to the chosen key.

Here's an example of different progressions on the same rhythm:

It's been a long time since we saw such a well accomplished sample-based library dedicated to a single style and providing loops and instruments. Generally speaking, they are rigid, static and lacking in quality, or else they are very limited because they do not offer any variations and flexibility in their use. In this case, if we exclude the useless trumpet and accept the sound of the pianos and basses — which ought to be limited exclusively to the role of accompaniment —, NI has really spoiled us: the richness and amount of grooves, the sound, the diversity of percussion instruments, and the stunning Pattern Edit window (a sequencer in its own right) make this sound bank a very fitting solution for any production in the need of some Caribbean authenticity. It has certainly earned a well-deserved place among the first in this category. Hats off to Native and e-instruments.