Something is for sure: Arturia's team never stops working! They are constantly updating their existing products and have launched Analog Experience, Oberheim SEM V and MiniBrute in a very short time. The Oberheim is the latest addition to the series of legendary synth emulation plug-ins that started in 2003 with the Moog Modular V, followed by the Minimoog, CS-80, Prophet 5 and Jupiter-8 simulations. Arturia even attempted to create a virtual version of another legend of Tom Oberheim's company, but they didn't succeed...

It's probably not necessary to present Oberheim, a mythical company that has had its successes and troubles after being bought by Gibson and Viscount. The SEM (Synthesizer Expander Module) was the first synth officially presented by its inventor in 1974. It was brought to life again in 2009 with a Patch Panel providing all 33 internal connections as mini-jacks and a Midi to CV Converter. These new features certainly gave customization ideas to Arturia: their virtual version also has many new features. 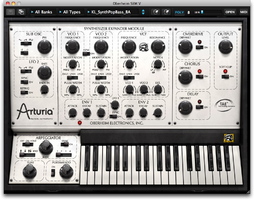 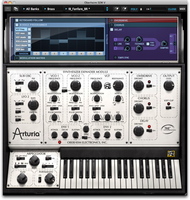 Out of curiosity, and because I always read that all Arturia synths sound similar, I compared the Minioog V and SEM waveforms (in this order) as well as a filter setting at 3,406Hz with maximum resonance (the release parameter settings are different but they have no effect on the sound in our example). Look at the screenshots and listen to the sound: No similarity...

... in the virtual world

Of course, Arturia didn't limit itself to the original features of the '74 synth. They added a second LFO using the same waveforms as the Sub with a speed control plus sync and retrigger switches (retrigger = the waveform is played back from the beginning for each solo note). 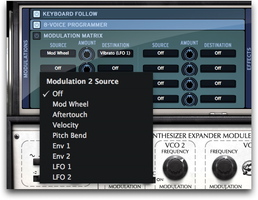 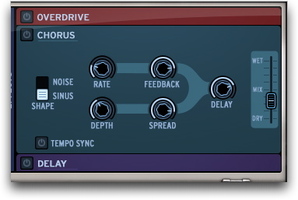 Arturia also added overdrive, chorus and delay effects as well as a master volume control and a Soft Clip button (such features have become standard in almost all plug-ins...). Don't forget to disable the effects from time to time in order to hear the real sound of the synth.

The last special feature added by Arturia is the Modulation section including three modules separately switchable. This section is hidden in the closable control panel. You also get a very clever and convenient Keyboard Follow feature we would love to see in other synths.

In the following sample, you'll hear the C-scale over two octaves played upwards/downwards and triggering different settings in random mode, then in forward/backward mode.

This module is an excellent implementation that opens new ways of creation. Hats off Arturia! Finally, several examples from the preset bank (some presets were edited). A great vocal-like sound...

Let's be clear: I have no '74 SEM in my studio. So a one-to-one comparison is impossible. I have only my memories of when I played the instrument and the many records where it is used... Therefor, it would make no sense to say this plug-in is an exact and faithful copy of the original. However, the virtual synth does share many things with the original synth: the features, the spirit, the typical Oberheim sound (soft filter clearly different from Roland and Moog filters). In short, don't hesitate to add this tool to your synth library if you're looking for SEM sound.

However, we also found a few problems: the envelopes/effects extend to the next preset, audible steps in some modulations. But considering the huge possibilities, the sound and the wonderful modulation section, we can only praise the quality of this synth. The ease-of-use, that doesn't limit the sound possibilities, makes it the ideal tool to start in the world of sound synthesis.