Please Turn on Your Cell Phones!

Applications are incredible – how does one know where to turn when there are so many apps for everything?  Since I’ve never seen a cat fly, I figured my neighbor’s pet would do nicely. Technically, I don’t know how the app works, since I am more of a literary man. But all you need to do is take a picture of the animal, indicate the desired cruising speed, and whoosh! The kitty flies as if being pulled up into the air! I tested it and it works fine. In terms of cons, they could have mentioned that the trial version only gets the cat 3 inches into the air, because I live on the eighth floor and from that distance, a kitty falls fast! This made me think that, however intrepid the feline species may be, it is not yet ready to grow wings. And I finally downloaded the TonePrint application in order to test the new TC Electronic bass combo. Controlling an amp with your mobile phone may not be quite as revolutionary as making cats fly, but let’s say it like it is: whether you’re for or against it, progress will never let up... 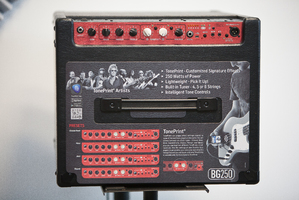 A 250-watt (RMS) bass combo, mounted with two 10-inch speakers and a tweeter, a tuner and built-in DSP, and sold for under $550, should tickle a bit. This kind of alluring commercial proposition really peaks my curiosity, as does knowing that the Danish — known for moving and shaking in the bass amp market — are behind this product. I'll proceed directly to the test instead of trying your patience any further. Let’s start with the dimensions of the BG250-210: it comes in the form of a rectangular cuboid shape measuring 18" x 14.7" x 24.4". Although its weight of 44.6 pounds is considerable for the less muscular among us, it's still pretty light considering the power offered.

The amp features the aforementioned pair of 10-inch speakers in front, topped with the tweeter (which is unfortunately piezo and constantly active), as well as a built-in tuner calibrated for six-string basses (so it works very well for five- and four- string instruments), a DI output, a three-band EQ (with boost and cut), an input gain, output volume, a mini-jack auxiliary input and headphone output in the same format, a single instrument input, a mute option (for silent tuning), and finally the famous TonePrint effects. On the control panel, we are presented with two knobs and two switches (to enable the effects): Each knob, assigned to the selected effect, controls the wet/dry balance. Two knobs would imply two selectable effects in the front, which is a real plus in the system used by the BH250 (the brand's amp-head version).

Despite this, I can't help but ask the burning question: why?

And as I am a little ambivalent and not at all intimidated by Viking types, I'll even do it directly in the language of the manufacturers (which I am perfectly terrible at):

Upon reflection, it's just a detail that particularly bothers me. I can rack my brain (which I thought was so full) all I want, and yet still do not see why our friends added another TonePrint effect, but did not allow for the possibility of stacking the two effects channels. 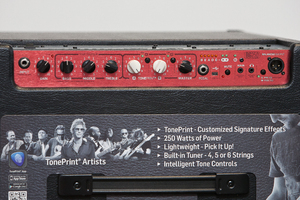 Any bassist (even those with bad intentions) would ask the same question if faced with such a paradox. Personally, when I saw the two knobs, I directly downloaded a compressor and a distortion in order to mix both at my leisure, only to be disappointed upon realizing such a thing was not possible. And so one is left with the sense of unfinished business, which is a shame because I know that many of you will think like me: why give a kid two Lego blocks then forbid them from sticking them together? I know, the comparison is harsh; I could have used the metaphor of throwing a dog a ball that doesn’t bounce. But let me remind you that musicians are primarily old children and cruelty to animals is wrong.

Now that I'm finished grumbling, let’s get to the more positive points. For despite the aforementioned unfortunate detail, there are still many things to praise in this DSP (an acronym for Digital Sound Processor). First, you have access to six types of effects (octaver, chorus, flanger, compressor, distortion and vibrato) downloadable for free on your favorite smartphone, which will act as an interface: you launch the application, choose the preset, you stick the phone speaker close to one of the bass mics and beam the signal. In four seconds, the signal transmitted to the receiver affects the DSP and you have the preset ready to use as you wish. In a previous review, I tested the BH250’s TonePrint feature and experienced some problems using my Sony Ericsson to control the application. Apparently this problem has been solved, because I still have the same mobile and it works very well on the combo. It is always unfortunate not to be able to change the factory settings yourself via software or the application in question. But who knows, maybe the Danes are saving this option for future days. It is possible to update the firmware of the amp by connecting a computer to the control panel via the supplied USB cable.

To summarize, I see some advantages to this ingenious system:

Without being a Danish engineer, I also see one or two things to improve:

For this description, I will finish by pointing out the manufacturing quality of the combo, surprising considering its sale price. For $550, there is no lack of commitment, either in the finish or the quality of the components that appear in the front (knobs, switches and connections). I make a point of applauding this aspect, since I‘ve recently noticed a decline in the general level of inexpensive amps.

For this test, I used two basses (JB Standard U.S., Ibanez ATK 300) and I recorded 2 takes using the DI output and a microphone jack (M88). You will find that the result has an almost constant hum on all takes. It was completely voluntary and natural: I wanted you to enjoy the chirp of our piezo tweeter friend, which, as you can hear, is not stingy on volume! Concerning the sound diffusion of an amp, using a piezo can certainly be relevant, but being able to manage volume would be a plus. The constant hum generated by the combo certainly won’t bother you on stage, but using it for studio work and capturing the speaker cab would require audio engineering skills that I just don’t have.

I chose the 2x10 version for this test for two reasons.

For the first, you must know that your humble author has luxurious tastes:  when you let me choose between three amps, count on me to choose the most expensive one (this is my princess side).

Second, the sound signature of 10-inch speakers is perfectly etched in my mind because I play on this setup and know the grain of most of the 210s on the market. I know some of you have the budget for 15-inch models, or simply prefer the big boomers. I also know that this series does not include outputs for additional speakers, so choosing the correct configuration is critical.

Note that the BG series offers four models: a 15-inch, a 12-inch, two-8-inch and two-10-inch speakers. Personally, I am an aficionado of the 10-inch for its response time, which is hard to match, except by a few 2x12 products that could also be my preference.

The single 12-inch is not an option for me and my volume needs. These takes were recorded with my Steinberg UR22 interface, mixing the DI output of the amplifier with a microphone capture (Beyerdynamic M88). On the first recording, you can hear the sound of the amp with all the settings flat. The neutral result is clean without being sterile. As I again used my old Jazz Bass for this test, you should have no trouble recognizing the texture of its two pickups.

For the second take, and for the third, I raised the mid and low bands slightly, and for the third I copiously downloaded a compression preset on the first TonePrint module. To help you appreciate the qualities of the compressor, I placed two accents in the middle and end line, where you will notice that there is little contrast between the notes played normally and the more punchy ones. We can therefore conclude that the compressor works pretty well.

For the two following excerpts: same operation, this time with the mids sitting lower and double peaks on the high and low ends. The grain balance (neither too low nor too crystalline) is comfortable enough for slap, and I personally appreciate a signal that is not typically percussive. Note however that to get this grain, even when using a Jazz Bass particularly relevant to this style, it was necessary to push the two extreme bands to their maximum.

I had more trouble with the pick. These two excerpts are made with a passive ATK 300 tuned to B-A-D-E. Usually, finding the settings for this type of thing is not at all a concern. Here though, I put in some time, and to be honest, I'm only half convinced by the result. Although it’s nice to have a good mid-range spectrum, it lacks a little something all the same, a je-ne-sais-quoi that would render it one hundred percent effective. For rockers playing exclusively with picks, I think the 15-inch version would be a much better fit. And with the proper compression, provided by the TonePrint, you can always manage. As for the distortion, on the other hand, I’ll be much less ambivalent: I didn’t find any of the saturations very convincing.

On the last takes, there are several TonePrint effects: chorus, flanger and octaver.

In my excerpts you can hear only one version per effect, but TC Electronic offers numerous variations for free. I was really impressed by the built-in Tube Drive circuit, which acts as a gain boost and helps harmonics swell where needed. If only we could assign it a little compression...

One could read this test and think I had nothing positive to say about the combo. However, if I criticize the work of our Danish friends, it’s because I appreciate the brand for its sense of innovation and the quality-to-price ratio of its products. The brand remains excellent. The BG250 delivers ample power for small and medium-size venues, offers passable sound quality in most styles and includes a tuner and a DSP that is constantly updated. For less than $550, with this production quality and speaker configuration, the competition needs to be wary of this rising brand. Try it out for me and while I wait for your feedback. Meanwhile, I'll find a new cat, maybe one who’s a little less flat, for my neighbor!