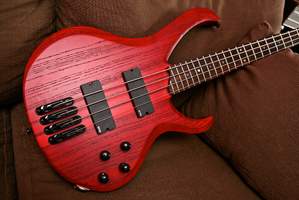 That was a rhetorical question. I have never talked about Ibanez on this site, hence, I will briefly summarize the brand's history for the curious ones amongst you.

The HOSHINO SHOTEN company was founded six years after the first World War, in the land of samurai soldiers. In those days, the company sold scores and music paper ("Shoten" means bookstore in Japanese). During the following years, the founder and his successor (Matsujiro and Yoshitaro HOSHINO, respectively) gradually changed the activity of the company to importing musical instruments. In 1929, the company HOSHINO GAKKI (which means musical instrument) was created for this purpose. They imported Spanish guitars by SALVADOR IBAÑEZ (which is the name of the craftman who created the workshop, as well as the first double-neck guitar). Some time later, a civil war devastated the land of castanets. The workshop of Salvador's two sons was destroyed and some members of the staff were killed during violent clashes in the streets of Valencia. Due to this tragedy, the Japanese importer lost its main supplier so they bought the brand to manufacture the products in Japan (in the city of Nagoya). In 1962, Junpei (Yoshitaro's son) took over the family business and inaugurated a new production facility called Tama Seisakusho Factory. The company manufactured guitars and drums until 1966. From this year on, the company subcontracted most guitar manufacturing and concentrated on drums (under the brand STAR, which later became TAMA).

At the beginning, IBANEZ was exclusively influenced by European instruments, from traditional Spanish guitars to EKO and HAGSTRÖM replicas. Later, the brand followed the trend of American instruments and started manufacturing GIBSON and FENDER replicas. The business flourished until the end of the 70's when the manufacturer had to face a trial initiated by a parent company of GIBSON. But this setback was positive because it forced the manufacturer to produce its first own instruments (called "modern"): thus the Iceman and Roadstar electric guitars and basses were born. Encouraged by this success, IBANEZ started developing original designs and new concepts (slim neck-through body, two-octave fingerboards, active electronics) to become the reference brand we know today.

The new BTB (Boutique Bass acronym) looks like its grandparent while offering different electronics. Neither Japanese nor Korean, the bass is made in Indonesia, the land of Orangutans and Java.

I have always liked Ibanez necks. In my humble opinion, they are the main reason for the success of the Japanese company. So I'll start with this component, which I'll compare with the neck of an SR model (one of the manufacturer's classic products). 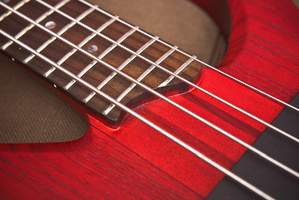 The first thing worth mentioning is that all necks of the BTB series are neck-through. You'll either love it or hate it, it's all a matter of taste! The basis of the concept is sustain, so the neck is made out of five (three maple and two bubinga) plies. The BTB neck has slightly increased dimensions, compared to the SR:

On the contrary, the thickness of the neck has been slightly reduced; the back of the neck is a bit less round than that on a Soundgear (a half millimeter at the first and the 12th frets) — it's not much but you can feel it. The instrument has 24 frets, which makes two octaves. The neck/body junction is somewhat original: the last fret is cut so that only the G and D strings are over the fingerboard. It looks nice but, honestly, I don't understand the usefulness of it! A lot of effort has been invested in suppressing two notes (A and E) out of four, that could actually be useful. 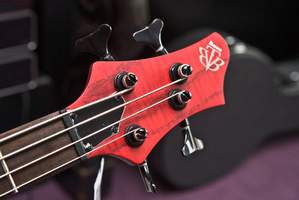 If this feature is for aesthetical reasons, the choice might prove ungrateful. However, considering its place on the neck, it won't disturb many musicians except for a few solo bass players. In summary, you get a slightly wider and slimmer neck. You have more space to move your fingers without hindering the movement of your left hand. The wide cutaways allow an easy access to the upper frets. The slightly longer scale poses no problems and my left hand feels very comfortable on this neck.

The headstock design matches the body and the fingerboard design at the last fret. The headstock hosts Gotoh-type tuners (I emphasizes the word "type") which are quite basic sealed lubricated machine heads. To be honest, I personally find they don't quite reach the level of a "boutique" bass guitar. On the contrary, the bridge provides four independent saddles to make you feel confident. The ash body feels very comfortable. Its shape supports the right arm really well and it gives the instrument a light weight considering it has a neck-through body design. The fret work is not exceptional but it's alright. The bass is provided with an Elixir string set, like most Ibanez instruments.

After the body, let's take a look at the engine of the instrument comprising the pickups and electronics. Ibanez was very generous with the BTB 700: it is equipped with a pair of EMG pickups controlled by a three-band EQ. This is a new feature of this model (the previous one featured Bartolini MK2 pickups), a small update including a semi-parametric mid band. You get a volume and a balance control, as well as two dual pots: for the semi-parametric mids and for high and low frequencies. It may seem sophisticated but once you get used to the design, even a basic metal freak will benefit from this active system to shape his sound.

I guess some of you are already offended... Don't worry, I like pulling people's leg... and I'm trying to make you understand that this instrument is made for your musical journey. The look of this bass guitar inspires me; and this impression is confirmed by the list of endorsers for the series. But we won't limit our opinion to a single visual bias or to the marketing strategy of the manufacturer. 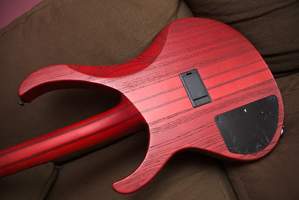 Let's go back to the electronics and talk about the new pickups mounted on this series. The EMG 40 DC is an active pickup with an onboard preamp that is the mark of the manufacturer: a humbucker featuring two ceramic bars wired in parallel. The particularity of the 40 DC is its wider inducting surface (10.2 cm). The pickup surface is enough to capture the B string of a five-string bass, so it suits the slightly wider space between the strings of the BTB perfectly. I've always found that the performance of EMG pickups are remarkable in many aspects. They are very effective to capture extreme frequencies (crystal-clear highs and powerful lows) and famous for their sound quality.

However, I personally find that they sound too accurate. Although I can recognize the intrinsic quality of this famous pickup, I must admit that their sound character isn't one of my favorites. But, as I said before: no prejudices! I will now describe the sound... after having my rant of the day:

I will never understand the paradox imposed on us by some instrument designers.

On the one hand, they try to make the battery quickly accessible by adding a special cover to the compartment. However, this cover is as easy to open as it is to break (like in this case). On the other hand, they hide the truss rod behind a plastic plate fixed with four tiny screws that seem to be there only to annoy you, in case you want to adjust the neck of the instrument. As a result you'll have to use some sort of adhesive tape on the back of the body after the first battery replacement, and you'll lose the truss rod plate after adjusting the neck a couple of times (because you can't stand fighting those tiny screws for hours).

Let me start this paragraph by adding some info I forgot to mention above (it just came to me when I plugged in the bass): the input is secured by a NEUTRIK port. For those of you who don't know the advantages this connector provides, it allows you to plug your jack effortlessly while preventing the cable from unplugging unintentionally. To unplug the jack, you'll have to push the small red part on the connector. This accessory is very useful when you get wild on stage. Now I can begin the most important, but subjective part of this bass review with my mind at ease and feeling secure. 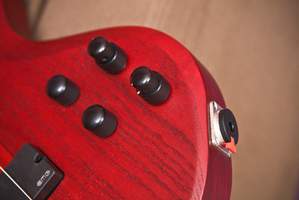 To describe the sound, I'd say that it is faithful to what I was expecting — and even a bit better. The typical EMG sound can be easily recognized in the dynamic response, the brightness of the highs and the deepness of the lows. The sound isn't muddy, it is actually perfectly clean and without unwanted noise (which is not very surprising given the low-impedance humbucking pickups). You can, obviously, get a huge output level and the controls are very effective, especially the semi-parametric filter that allows you to emphasize the desired mid-frequency range.

The sound is very straight with a flat EQ, and the 40 DC have no special sound color. You can almost recognize the acoustic sound of the instrument with a slightly emphasized low end. Low-impedance pickups generally gain more character with an EQ, and that's the case here. As a consequence, you'll have to shape your sound with your fingers and with the six available parameters. Novices will need some time to control an active pickup system, but a good 9V or 18V preamp coupled with versatile pickups allows you to create almost every possible sound. I must admit that the combination of the semi-parametric mid-band filter and the EMG pickups works wonderfully.

This BTB certainly cannot sound like a Jazz Bass or Precision Bass but it's good enough for anything else. And the mid-frequency filter opens new possibilities. Emphasizing or shaping the desired frequencies allows you to fine tune your sound in order to get an amazing response. I find the overall sound is effective, so this bass will not be limited to metal heads, even though it was clearly conceived to suit this market segment.

The bass is great to play slap (we didn't expect anything else from EMG pickups) and it can easily be used for music styles like rock, funk, etc. Fingerpicking, flatpicking, tapping, strumming, and most any other technique will sound good with the BTB. For music styles with roots like blues or jazz, this Ibanez is not the best instrument but it will do the job if needed.

Compared with its direct competitors, this bass guitar ranks in the higher end of the market. It features a neck-through body, a semi-parametric EQ and a good pair of pickups for about $1,000. The BTB is a nice-looking and affordable active bass. Now it's your turn to test it!