Last week you saw that one of the main reasons for being of an irregular resolution is to suspend the arrival of the final resolution. And you also saw that an irregular resolution can also result in a dissonance, but in certain cases also in a consonance. If you have been following this series form the start, you might have had a sudden illumination and asked yourself: "isn't this an interrupted cadence?"

Well, yes, the interrupted cadence is a form of irregular resolution, because even if, strictly speaking, it doesn't result in a dissonance, it allows you to get a consonance different from the initially anticipated one and, hence, delaying the expected resolution (and maybe, for instance, modulate to a relative key of the original one, see article 18).

So, in the F major example below, the IV-V half cadence of the first bar isn't followed by a perfect cadence (V-I) as you'd expect, but rather by an interrupted cadence, V-III. The perfect cadence and, hence, the true resolution, appears only at the end of the piece.

But as I said before, irregular resolutions have the particularity of not resolving to a consonance usually, but rather to a new dissonance. The simplest indirect – and dissonant – resolution is yet again related to the perfect cadence, adding to the normal dominant the substitute dominant, which is normally used to replace it (see article 15). Why? Well basically because both chords share the same tritone, and hence the same dissonance. So the dissonance remains from chord to chord.

In the C major example below, the G7 chord doesn't resolve to the tonic chord right away. It first goes through an indirect resolution via the Db7 substitute chord. The common dissonance is the F-B tritone. G7 resolves indirectly and dissonantly to Db7, which resolves directly to C major. 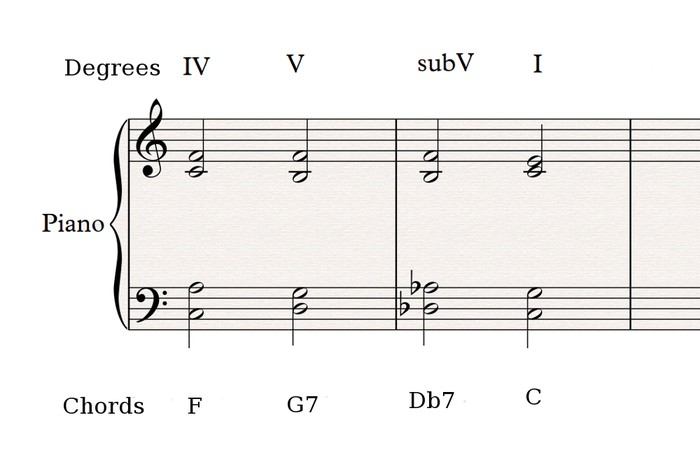 Finally, the forced motions mentioned in article 25 apply to direct resolutions. If you don't apply all forced motions to a chord, you can get an indirect and dissonant resolution. Hence, with a seventh dominant chord you can resolve to a dissonant chord simply by lowering the seventh, as in the following example:

The dissonance here is certainly not linked to the III degree, which is not dissonant in itself when it is in root position, but to the inversion which places a major second at the top of the chord.