In the last chapter we talked about some of the efforts made by manufacturers, software makers, broadcasters, and audio professionals, as well as lawmakers (the idea to lower the volume limits in concert venues) to fight the loudness wars. By way of example, I mentioned Sound Check, the new feature implemented by Apple, but they are not alone in this fight.

Some other major players in the digital audio scene have put into place volume moderation systems: Spotify, for instance, introduced a normalization option in 2009 (although I haven't been able to find detailed information about how it works). And you should be careful when this option is deactivated because Spotify uses a limiter that can have very nasty effects, depending on the volume of the different songs (especially those mixed very loudly, which basically means most recent albums). As if "hot" albums (with tiny dynamic ranges) didn't sound bad enough as it is...

But maybe the most important step was taken by YouTube in December 2014. Don't forget that YouTube is currently the go-to platform to discover and follow musicians worldwide, especially among younger people, so any changes it makes are consequential and influential. The video streaming platform implemented loudness normalization for its music videos using -13 LUFS as a reference level. This means that all videos uploaded to the website are modified in order for their perceived volume to be the same, regardless of their original volume.

Does your mix have a -20 LUFS (giving you, in theory, some very generous dynamics of 20 LU)? Well, by being boosted to -13 LUFS it gains 7 LUFS, if the margin left for the maximum peak volume allows it (which isn't always the case). Does your mix have -8 LUFS? Well, it will lose 5 LUFS when normalized at -13 LUFS. Which one of the two do you think will sound better?

Take a look at the following screenshots.

The first one is Kendrik Lamar's "King Kuta" from the To Pimp A Butterfly album (with a dynamic range of 5dB). 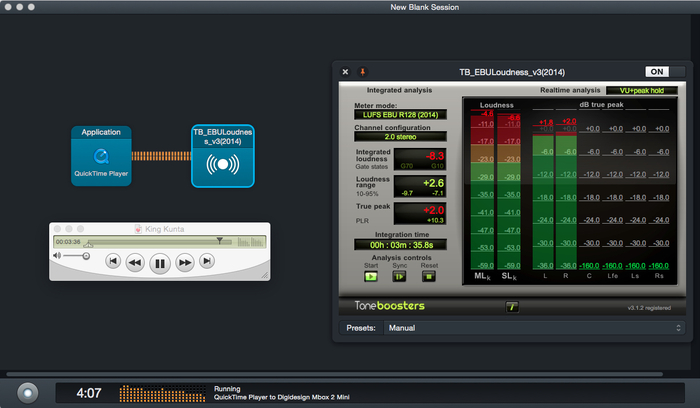 The second one is the same song but taken from YouTube.

As you can see, the loudness has decreased to 13 LUFS. And the same has been observed when doing the same with other songs. Do note, however, that the music videos uploaded before December 2014 still exhibit varying volume levels. We'll have to wait and see if YouTube will apply this modification to all videos or only to the most recent ones. But isn't it possible that commercial arrangements are made so that some videos sound louder than others? That's a legitimate question, especially since some recent videos do exceed the apparently imposed limit (-13 LUFS).

But what do I mean when I say "-13 LUFS," you ask? Well, LUFS stands for "Loudness Unit Relative to Full Scale" and it is the new measurement unit defined by the EBU-R128 standard. Put briefly, it sets the Maximum Permitted True Peak Level at -1dBTP and the normalized Target Level at -23 LUFS. Note that international standards, like the ITU-R BS.1770, propose the LKFS standard (standing for Loudness K-weighted relative to Full Scale), which is equivalent to LUFS.

Without going into too many details (at the end of this article you can find some useful links and documents in this regard), it's a new way of measuring perceived volume with different durations (Integrated, the entire program material, Short and Momentary) and scales, according to the Loudness Range (specified in LU). And while perceived volume remains a relative measurement, when a standard is adopted across the board, its standardization does make sense. In case the specified Loudness and True Peak values are not respected, the files are modified to make them abide to the standards.

Thanks to this new way of seeing (ehem, hearing) things, we can only hope that its adoption will lead to a standardization not only of music or audio, but rather of all possible media. This would allow the listener/viewer to be in control of the overall volume and put an end to the destructive loudness wars that are so harmful to sound and, in the end, to our ears. A practical example? The ads before a film begins, which no longer would drill the ears of movie theater goers.

FYI, the two examples in the previous article were processed with one of the many processors that allow you to adjust an audio file to the maximum defined by one of the two standards. For the Jones and Guetta clips, I set the processor to -20 LUFS.

If these standards were to be widely adopted, which seems to be the case, their impact would be huge. Because the advocates of the "make it louder" approach ─ record labels, advertising agencies, radio stations, and the artists themselves ─ would (hopefully) come to realize that their productions pale in comparison with adequately mixed ones, given their obvious lack of dynamics and clarity.

The sooner it happens, the better.

All documents and links listed here, which I used to write this series of articles, include many more links and references you can consult if you wish to deep digger into the subject: