A First Look at Multiband Compression 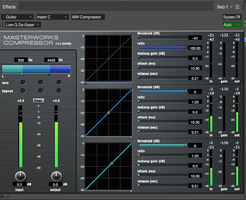 Up to this point we have only discussed full-range (aka full-band) compressors, in other words, processors that apply the exact same compression to the entire frequency range. But there is gear that allows you to compress different areas of the frequency range independently by splitting it into several bands. These multiband compressors are capable of compressing the signal according to different ratio, threshold, make-up gain, attack and release times for each frequency band — and the bands can often be defined by the user. Back in the analog days, this kind of processor was rare and expensive. As a consequence, they were to be found almost exclusively in mastering studios rather than mixing studios. However, digital technology has brought us an array of multiband compressor plug-ins at relatively affordable prices. And it's become much more common to see such processors used at the mixing stage.

Before we begin I need to give you the heads up: While multiband compressors allow you to do much more than a traditional compressor, they can also cause a lot of damage and dialing them in is no easy task. What's more, remember that ─ before the digital era began ─ 99.9% of the songs used to be mixed without such tools, so there's no reason why you shouldn't be able to do fine with a good old full-range compressor. Hence, I recommend you to use multiband compression only when really needed.

In essence, a multiband compressor allows you to compress a signal according to different frequency zones. Thus, it's better to use this type of processor on signals whose frequency bands require special needs in terms of dynamics processing. Yes, I know, it seems obvious. However, this is often overlooked by beginners, which leads to poor decision-making. I'll use a couple of practical examples to make my point clearer.

It might, for instance, be effective to use a multiband compressor on a kick drum when you want to give it more punch. As we saw in a previous article, you need a quick attack time to achieve a punchy sound. Yet, the faster the attack, the easier it is to end up with an aesthetically unpleasant distortion in the low end. In fact, since the wavelength of low frequencies are very long, they don't respond too well to short attack times. That's why an adequately set multiband compressor, with a short attack time to get punch in the mids/high mids and a longer attack time to control the lows, can yield very good results.

Another way to use a multiband compressor is as a de-esser on vocals. By compressing the frequency range where sibilant sounds are found ─ usually between 4kHz and 7kHz ─ while leaving the rest of the signal intact, you can get results that are just as convincing as if you were to use a dedicated processor.

Along the same lines, you can attenuate an unpleasant resonance that is only present on a given instrument during certain moments by targeting that frequency band and setting the threshold in a way that the compression is only triggered when you want it.

Finally, a multiband compressor with external sidechain can prove great to make the kick and bass blend better together, even in the most difficult situations. To achieve that, you need to proceed as described in the article dedicated to sidechain compression but aiming only at the low end of the bass. Thus, with every hit, the bass will make some room for the kick, but the note of the bass won't disappear completely since the rest of the signal remains intact.

Next week we'll see how to dial in a multiband compressor.